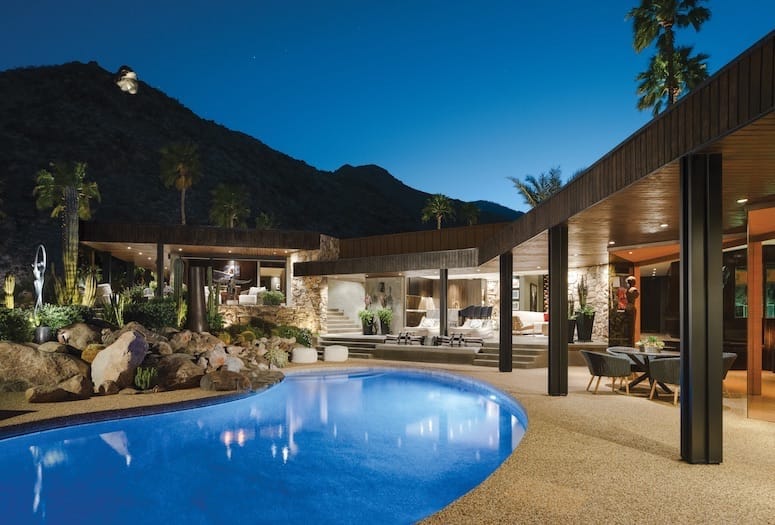 With all due respect, the magnificent Frey House II hardly has the monopoly on mountainside siting with rugged topography and jaw-dropping valley views.

The aptly named Cielo Rock House is a pool-wrapping, four-bedroom lair where sky and rock meet, face off, and then call a truce. Neither overpowers the other; rather, they strike a powerful balance to cradle a home that sits at their juncture. What this Little Tuscany home lacks (though that word seems absurd) in original details from 1959, it recoups in views that spill down the hill in layers, organically landscaped acreage, and a cool new identity by Los Angeles-based designer Chad Christopher Waterhouse. 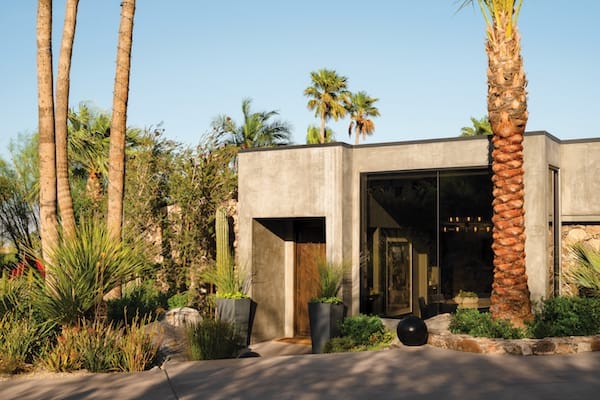 The front exterior was upgraded with flat glass replacing an arched glass atrium. “When you come in the driveway, you see straight through to the pool and the valley,” says designer Chad Christopher Waterhouse.

“I kind of gave free will to Chad,” says David Cooley, who owns The Abbey and The Chapel at The Abbey bars in West Hollywood. “It’s become like a resort rather than a home. I feel very comfortable here, whether by myself or with friends and family. At night, the house takes on a whole different personality.”

“We call it a night house,” confirms Waterhouse, who has designed other residences for Cooley as well as a new cocktail lounge featured in the Los Angeles Times. “When he bought the home, there was just one light on a palm tree. Now we have more than 250,” including the spotlight on a colossal rock Cooley wanted to illuminate on the peak. The home lays its newfound splendor — by day and by night — across more than 4,000 square feet on three adjoining lots. It is dressed to the nines in an evening palette of tawny woods, natural stone, and Night Owl by Benjamin Moore. Inside and out, it’s a party-ready opus of warmth, depth, and sultry sophistication.

The “bare bones” compound of sheet rock and stucco gave Waterhouse a bland starting point and an easy springboard for earthy drama a year in the making. The moment he pulled off the sheetrock in the kitchen, a vision flashed before his eyes. He discovered and preserved midcentury stonework as the backsplash for a bar and brought in more than 100 pallets of similar stone to match. Wood slats line up across many walls and form a pattern on the dining room ceiling. To modernize the stucco columns along the patios, he wrapped them in pleated metal. 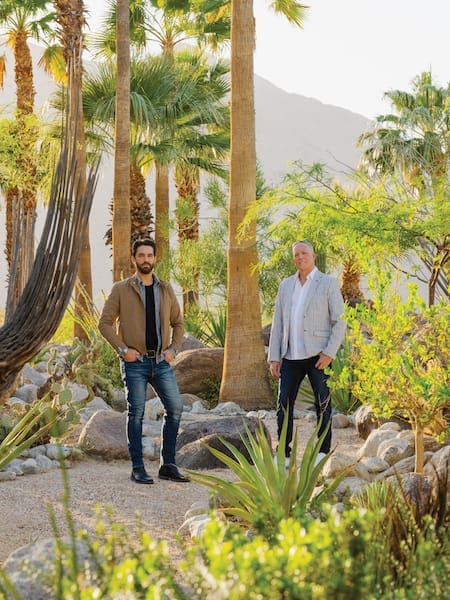 Structural maneuvers preceded the atmosphere, of course. The original layout prevented intuitive access to the pool, forcing sunbathers to exit through the garage or the lower-level living room. Waterhouse opened the wall across the back of the kitchen with glass sliders. In the adjacent lounge area, he added a midcentury-style fireplace. The two spaces read as one, with the stone fireplace and the Calacatta stone island rising from the same chevron hardwood floor.

He also inserted a wall to form a proper foyer and replaced an arching atrium window with flat glass in the dining room. Outside, he relocated pool equipment and placed air-conditioning units on the roof, making room for a wood pergola that stretches over a multi-use patio and maximizes the novelty of mountainside entertaining. 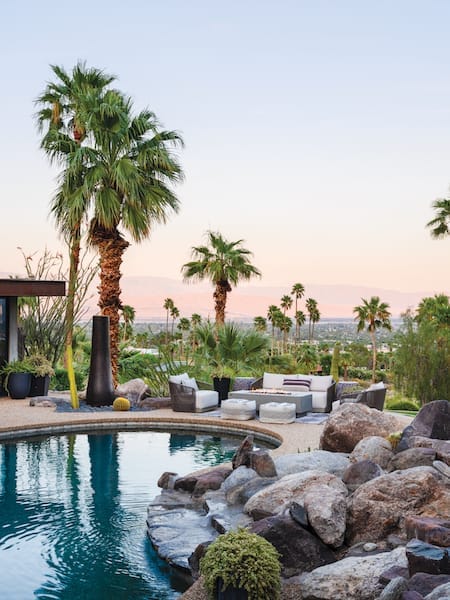 A seating area beside the pool faces back to the house and the mountains, perfectly positioned for sunset cocktails.

Where other homes suffer under decades of hodgepodge modifications that beg to be stripped away, this one proudly wears a few battle scars that, in the new design, add intrigue. A mirrored fireplace with a marble hearth juts into the living room, echoing the angled glass walls on the other end of the room, as one example. Primarily the home pulsates with a lo-fi, late-night energy from current pieces and finishes Waterhouse selected for the project.

From the shadowy foyer to a fire pit set at the bluff’s edge, he designed a beautiful place for beautiful people. The combination of its floor plan, sets of stairs, and reflective panels of original glass and mirrors infuse a maze-like quality made for getting lost in. It’s a veritable fun house that has seen its share of good times. 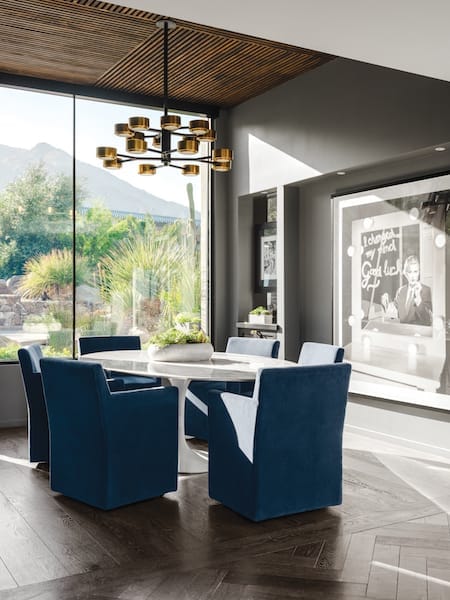 A new wall with art niches forms the dining room. The foyer is on the other side. 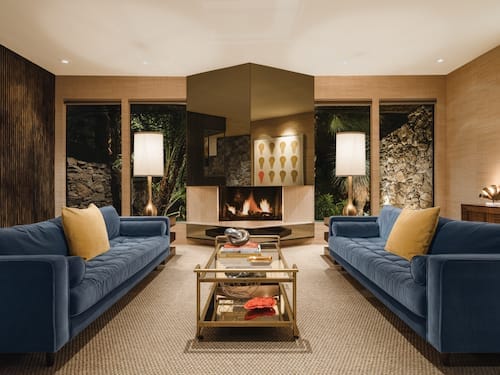 Cooley has hosted Coachella parties and events where fire throwers, dancers, drag queens, and the Palm Springs Symphony show up to perform. Guests pass three security points before golf carts whisk them up to the house where they look down on the palm trees and occasionally bump into a mirrored wall. A marble-lined walk-in cooler is a favorite spot to throw back a tequila shot among friends when the temperatures soar. 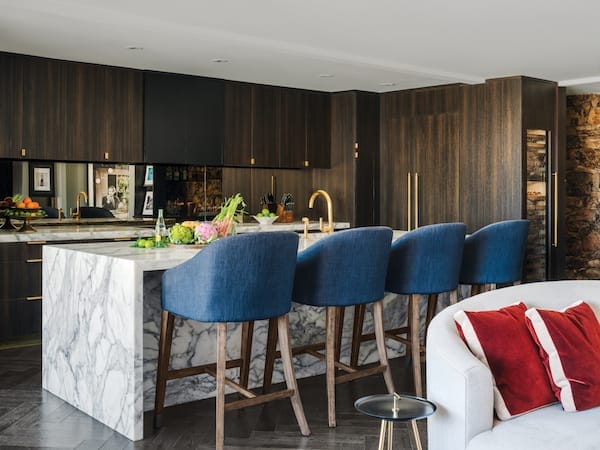 Integrating the appliances blended the kitchen into Waterhouse’s design. Cooley says the home  has cancelled many dinner  reservations because once guests arrive, they don’t want to leave.

Recently, Cooley adopted the casita as his bedroom, office, living area, personal bar, and all-around man cave, leaving the two bedrooms in the main house for guests. “I didn’t know what a casita was until I moved here, but I’m taking it over as the owner’s suite,” he says. “It’s so peaceful, and I love the view,” which faces the pool and valley rather than the mountain.

Waterhouse has begun redesigning the two-bedroom casita, reached by a set of stairs, into a one-bedroom penthouse of sorts. “Chad will send me pictures of things he likes in an email and I don’t even open it,” Cooley says. “I tell him to go ahead because I trust him.”

Given the cosmopolitan home base of both designer and homeowner, the celebrity sightings in fine art photography throughout the home are fitting. Freddy Mercury and Andy Warhol seem more like real-life acquaintances popping in to say hello than removed subjects in a photo. 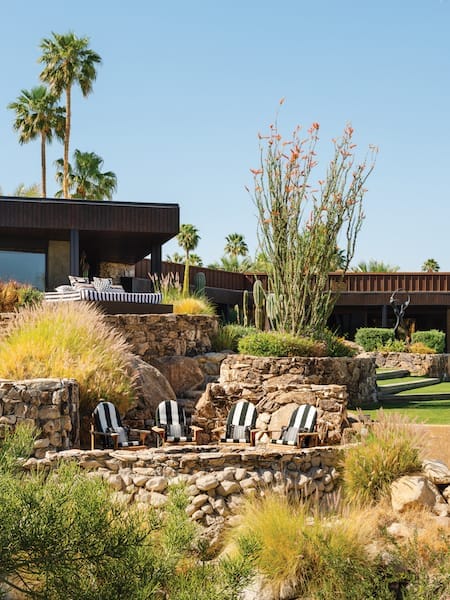 Plateaus are for sunning on a day bed or gathering fireside.

“The house feels like we seamlessly placed it into nature.” 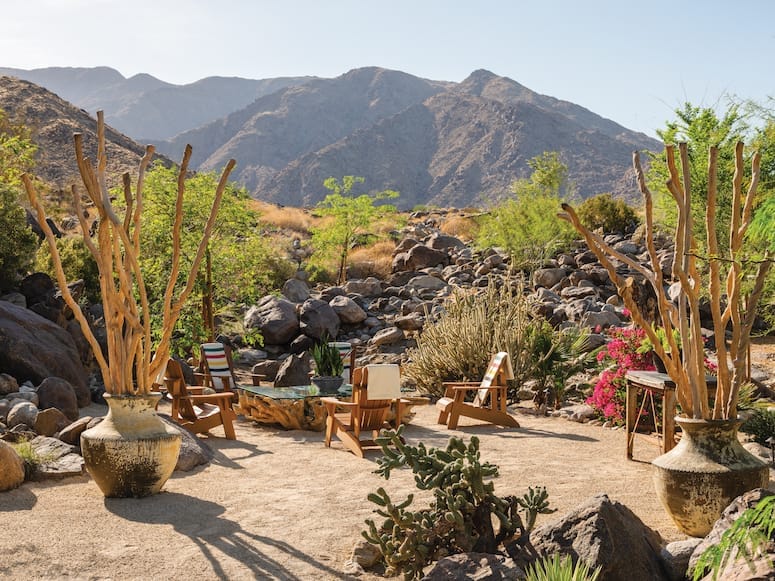 Formerly a rocky plot of land carved by a few trails, Cielo Rock beckons with seating areas for all moods, spread across its acreage between a mélange of desert plants, trees, and boulders. 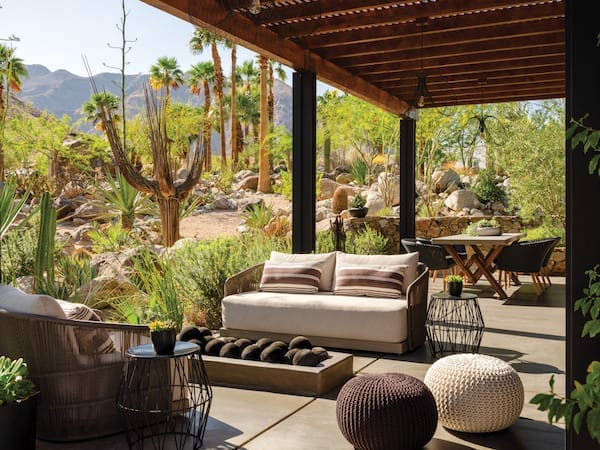 Yet for this nightclub entrepreneur, it is the downtempo beat of the surrounding nature that draws him. More than once, he has driven from L.A. at 4:30 a.m. just to catch a Palm Springs sunrise. For all the glamour one can point to, his favorite spot at Cielo Rock is “the campsite” — a High Desert-esque hangout among the boulders. Several chairs encircling a table made of petrified wood is far cry from cocktails and conversation in West Hollywood, and that’s exactly the point.

“I love how the house feels like we seamlessly placed it into nature,” by building up the nature around it, Waterhouse says. For his landscape design, he added about 200 trees, a 1,000 plants, and a plush lawn with big grass steps to counterbalance the existing two-plus acres of rocks and trails. Meanwhile, Cooley has enjoyed the Zen process of moving rocks and blazing trails, picking up where the previous owner left off.

It's a party-ready opus of warmth, depth, and sultry sophistication. 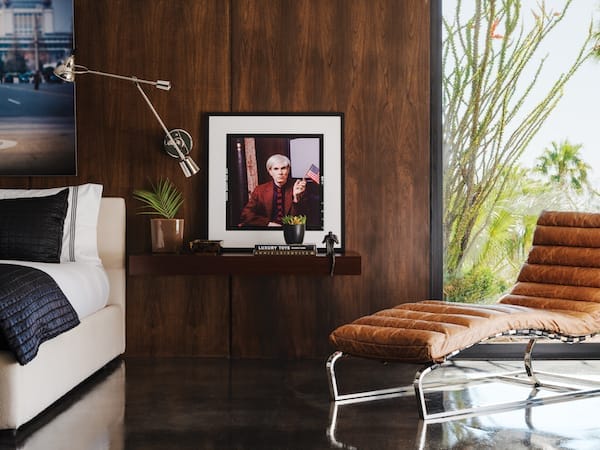 A casita bedroom (right)  and primary bedroom capture the modern yet warm depth of the home’s overall design. Where one contrasts wood slats with stone, the other builds up from a cool polished cement floor to add walnut wood paneling with black meal dividers. Once or twice a year, the home is booked through Elite Luxury Homes. High-rolling clients find little trace of the stucco-clad and sheetrock home Chad Christopher Waterhouse started with. 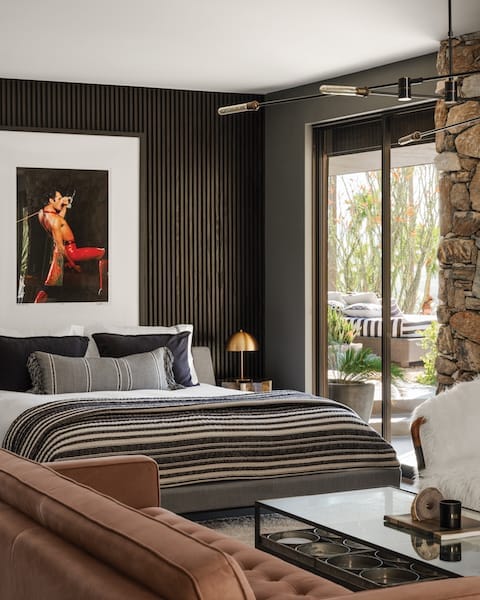 The “night house” has two distinct and fully realized sides. There is the stillness and awe when someone looks up to see a bighorn sheep standing on the rock in what Cooley calls “a Lion King moment,” and there are the parties and shots in the walk-in cooler. There is the existing and the new, the rocks and the greenery, the heat that shimmers across the valley below and the fresh snow covering the craggy mountain above.

Though it shines at night, the home is more than an epic party house.  For Cooley, this refuge and its design are all he could want, at any time of day. “I just celebrated 30 years for my nightclubs,” he says. “It was touch-and-go last year. I didn’t know if we were going to make it. It’s so nice when I come here. I really disconnect from L.A. I chill out and relax.” 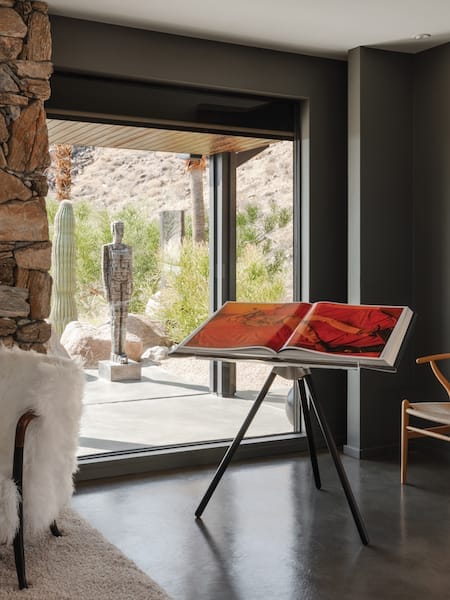 The dark interior of a casita is kept cool and shaded by the addition of a new overhang. The Little Tuscany home was designed by L.A.-based Chad Christopher Waterhouse.