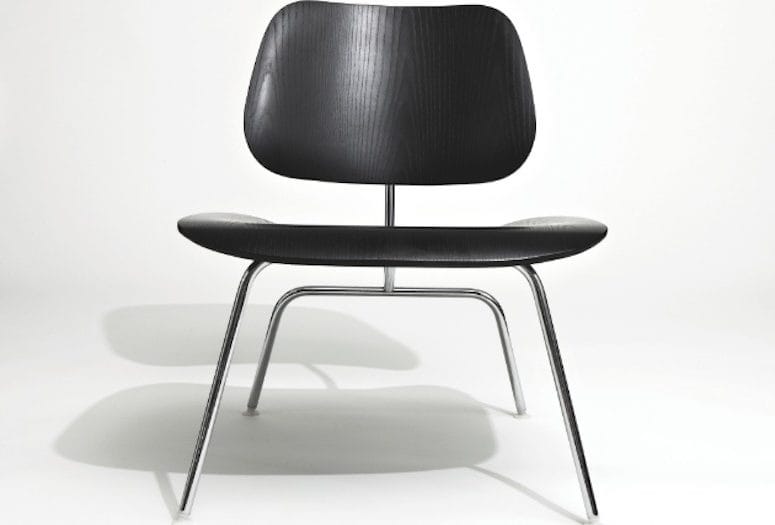 To Eames or not to Eames? It’s a serious question in Palm Springs. Asked late in the evening, it could trigger a fit of insomnia.

A few certain chairs — or their noted absence — are more important than a home’s provenance. Will a black leather lounge chair and ottoman earn a nod of approval? Or eye rolls and knowing glances that you’ve become a cliché of what you longed to embody?

Mad Men wouldn’t touch it. To have it on the set would have been too obvious. (The show did feature an Eames Time-Life Chair and Eames Aluminum Group Management Chair instead.) Yet in 1956, the lounge chair was a no-brainer. Everyone seemed to want one or have one, the chair’s own designers included. The personal set owned by Ray and Charles Eames resides today in the preserved living room of the Eames House in the Los Angeles suburb of Pacific Palisades, a folded blanket atop the ottoman.

Charles Eames reclines in one of his own chairs.
Photo courtesy of Eames Office (www.eamesoffice.com)

Few people know who conceived the La -Z-Boy. (It was two entrepreneurial Michigan cousins in 1928.) Adirondack chairs, butterfly chairs, and papasans aren’t attached to a last name that is now a keyword on eBay.

The Eames duo was revolutionary. Their name came to stand for furniture that felt like an accessible status symbol in the postwar era, long before naming everything after oneself was acceptable.

The pair met in 1940 at the Cranbrook Academy of Art in Bloomfield Hills, Michigan, where Charles was head of the Industrial Design department and Ray (Kaiser, at the time) studied painting. The two hit it off when Ray assisted Eames and Eero Saarinen with drawings of chairs for a submission the men were completing to the Museum of Modern Art’s Organic Design in Home Furnishings competition. Each one emerged a winner. Charles and Saarinen won two first prizes. Charles and Ray got married.

After a honeymoon drive relocation in Los Angeles, the newlyweds fixated on the challenge of molding plywood in their home workshop. Their success in bending plywood into leg splints for the U.S. Navy during World War II produced an estimated 150,000 units. It also improved their tests for curved back rests and seats. Their first chairs hit the market in 1946. In the decade that followed, business boomed as backsides never had it so good. Then, the lounge and ottoman debuted on NBC’s daytime Home show, and Americans swooned anew.

The funny thing is, Charles Eames didn’t consider himself a chair maker, nor did he wish others to associate him solely with moulded plywood and plastic, wire mesh, and cast aluminum. He and Ray, his business partner and collaborator, were tireless creators and inventors. They were consummate educators and students. To many observers, these multifaceted individuals linked in love and a multifaceted careers, were even larger than life. The famous lounger they designed helped fund their interests beyond furniture.

The Eameses’ life was a collage of design promoted by savvy marketing. The phone rang with requests for corporate problem-solving from Polaroid, Boeing, and Westinghouse. Charles’ relationship with IBM culminated in designing the company’s pavilion and everything in it for the 1964-65 New York World’s Fair. A presentation titled Think, shown on 22 multisized, multishaped screens, upstaged their seven-screen show at the Moscow World’s Fair in 1959. The Eames recliner and ottoman, however, remain classics in their own right.
Photo courtesy of Herman Miller

Over four decades of work and life, Charles and Ray wove themselves into the fabric of the modernism movement using materials developed during the war. They became beacons of high-quality, low-cost goods for the masses, guided by their aim of “getting the best to the most for the least amount of money.” Lines between work and pleasure blurred under the soft lens of a childlike enthusiasm they shared. Although the pair’s playful natures bonded them to one another and intrigued the world, they also served a common sensibility.

The young designers they hired have recounted in books and films that their workplace was in a constant state of flux. Uncontained experimentation was policy at the Eames office in Venice Beach. One day the office was a hands-on incubator for the talented apprentices, and the next day it looked like a fierce battleground against ordinary thinking and mundane solutions. Yet the office produced brilliance.

Credit wasn’t always given to Ray. The creations were collaborative, but the recognition was mostly given to her husband.

In his later years, Charles drifted away from furniture toward film and photography, math, and science. (The ambitious short film, Powers of Ten, tackles the relative size of matter in the universe in eight mind-blowing minutes.) After he died of a heart attack in 1978, Ray kept the studio afloat. She passed away 10 years later to the day.

Although their unconventional office was just 120 miles west of the Coachella Valley, the couple didn’t established significant ties to the area during their lives. In legacy, however, rooms at the Del Marcos and Orbit In bear the name (and the furnishings). Local showrooms spotlight their vintage pieces like big game taxidermy trophies, and collectors plunk a prized original in a room where many will see it but few will touch.

In L.A., Charles’ late daughter Lucia (from his first marriage) owned the Eames Office and founded the Eames Foundation to safeguard the couple’s house, a national historic landmark. Her son, Eames Demetrios, now maintains the foundation and is a principal at the office, as are Lucia’s four other children. The family strives to keep the name relevant, as well the dozens of Eames chair options produced by Vitra and Herman Miller.

Theirs was a life of unrelenting creation across many platforms. So why are we stuck on the chairs?

We just can’t help ourselves. The versatile lounge chair and ottoman have been in continuous production since 1956 and reside in the permanent collection of New York’s Museum of Modern Art. Fashioned to echo “the warm, receptive look of a well-used first basemen’s mitt,” it draws the world-weary soul like a soft cloud floating on a star.

The other chairs appeal to what modern hearts crave: practicality with style. They never appear outdated. The Eames Molded Plastic Rocker is a nursery must-have, given by the Herman Miller company to its pregnant employees for decades. Time magazine deemed the Eames molded plywood chair “The Best Design of the 20th Century.” Several companies even reproduce the chairs in miniature scale for modern dollhouses.

In the documentary film Eames: The Architect and the Painter, the then-editor of Dwell magazine, Sam Grawe, says without irony or embarrassment, “There has probably been an Eames chair in every issue we’ve ever published.” Movies, commercials, print ads, fashion shoots, store displays, and even offices out of a Dilbert cartoon strip lean on Eames as a shortcut to timeless style with a retro twist. Charles and Ray: You made a damn fine chair.

Once their designs became part of the American culture, there they stayed. The Eameses wanted to make an impact as large as their ideas. And they succeeded.