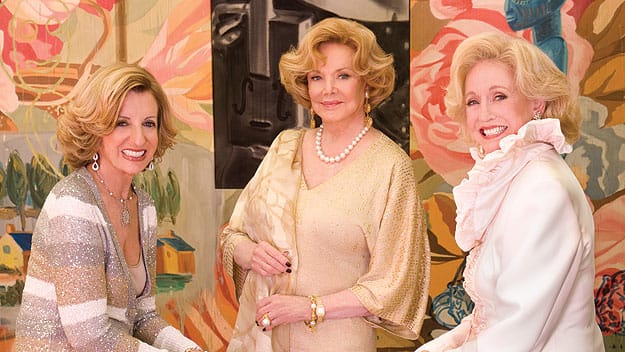 When Barbara Sinatra, Nelda Linsk, and Helene Galen launched the Barbara Sinatra Children’s Center 25 years ago, they infused star power into a deep, dark issue: child abuse. They saw the children that others overlooked and vowed to comfort and heal their wounded spirits.

“I found a passion for helping children,” Sinatra says. “These children are lost. They have no voice. They are blessed little souls, and we have to take care of them.”

Linsk recalls when no one discussed child abuse. “When you see the good that you’re doing with these kids,” she says, “it makes you want to keep doing more.”

“To devote time to something or somebody other than yourself is tremendously rewarding,” Galen says. “Essentially, the spirit of giving is deep down inside everybody.”

Over the past quarter-century, these three women have helped change more than 17,000 young lives through the center’s programs for children of physical, sexual, and emotional abuse. The Barbara Sinatra Children’s Center 25th anniversary gala on Nov. 14 will honor their achievements.

The center originated with Sinatra’s friend Barbara Kaplan, who became informed about child sexual abuse. “She raised funds to pay the salaries of therapists, and she used the basements of churches and schools and banks and any place she could find to hold therapy sessions,” Sinatra says. “And then she started art auctions. She raised some money, but not enough. That’s when she asked me to help her, because I had a lot of celebrity friends who played tennis and also painted.

“So I invited all my friends to the house — celebrities — and asked them to bring something along they had painted and to donate it to the art auction. It was very rewarding and successful. My husband helped, of course, being an artist himself, and then a lot of his friends.”

“People wanted a Tony Bennett painting or a Frank Sinatra painting or Dinah Shore painting,” Linsk says. “Frank was so funny, because he was sitting in the back bidding against other people in the room so that the prices would keep going up. It was great fun, and we had some of the top entertainers in the world. I can’t even remember all of them — Julio Iglesias, Tony Bennett, Ella, Sammy Davis, Frank, Dean — you name them, we had them.”

Former models, Sinatra and Linsk began helping abused children with self-esteem by teaching them modeling skills such as walking with confidence. But they always had to search for a place to hold sessions.

“I had a little party at my house for some of the therapists and children who had been abused,” Sinatra says. “This was the ‘aha’ moment when I knew I really needed to get in and help. They needed a facility to have their meetings.” Sinatra approached several venues without success. “So I called Walter Annenberg and asked him to help us,” she says.

The Sinatras went out to dinner with Walter and Leonore Annenberg; and before the night was over, Walter had pledged a donation to “buy a room” and provide land for the center. One by one, other donors, including Frank Sinatra, purchased rooms.

“We had the children’s center paid for before we ever put the shovel in the ground,” says Linsk, a board member. They broke ground on Frank’s 70th birthday — Dec. 12, 1985; doors opened a year later.

“I didn’t dream that Barbara would get that building up in like five minutes, but she did,” says Galen, who became involved after Sinatra sought out her fundraising and organizational talents for the first gala and who now serves as board president.

The architect gave them a good deal and decorators Linsk knew donated much of their work to create a child-friendly, welcoming environment.

“When [children] first come into the center, they do sad drawings, with tears coming down the faces. After they’ve been in there for a few weeks, they start painting happy faces. It’s amazing,” Linsk says.

“One day, there was a little boy sitting on the sofa with his head down,” she continues. “Barbara went over and tried to talk him; he never raised his head. A few weeks later, he ran over with a grin on his face and threw his arms around her, hugging her. When you we see that happen, you know you’re doing good.”

Every child is welcome, regardless of a family’s ability to pay. “Frank was adamant about that,” Linsk says. About 86 percent of children counseled at the center live below the national poverty line.

Getting the center up and running took teamwork. “Everybody was a part of it,” Galen says. Friends supported it by buying rooms before it was built and later through donation programs such as the Aunts and Uncles clubs. And the center succeeded, Sinatra says, because in the desert, “everybody had the same heart. We’re very proud of all our friends and all the people who really care about it. And there are many, many more than you know.”

All three ladies have a deeply ingrained commitment to giving back and have dedicated their lives to numerous causes in the region. Sinatra chairs the children’s center board and “doesn’t just lend her name,” Linsk says. “She’s at all of our meetings and goes around and talks to all of the children.”

“It goes back to, ‘Count your blessings,’” Sinatra says. “If you do that, then you’ll see a very good reason to give back.”