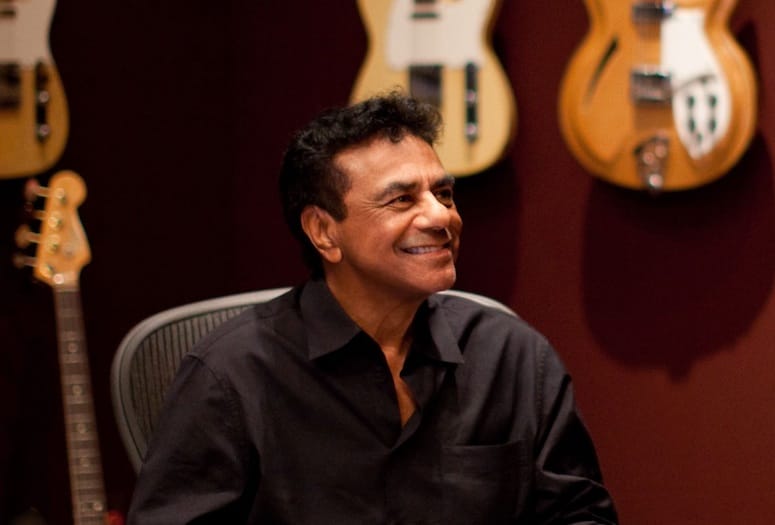 For someone who’s been entertaining audiences going on seven decades, Johnny Mathis is as humble as they come. “We made some hit records in the beginning,” he says. “Some of the songs were pretty far out, and some of them were pretty good.”

“Some” is quite the understatement, as Mathis — known for velvety smooth hits like Chances Are and It’s Not for Me to Say, as well as a veritable score of Christmas standards — has sold more than 350 million records worldwide to date, and counting. Chances are, you probably own at least one of them yourself.

Mathis is bringing his 60th Anniversary Tour to The Show at Agua Caliente Casino Resort Spa on Feb. 13 in Rancho Mirage. From his Southern California homebase, Mathis, still laser-sharp at age 80, was more than happy to discuss his humble vocal beginnings, how he stays in shape, and what concertgoers will hear on the night before Valentine’s Day.

You grew up in the San Francisco area and went to the local clubs as a teenager to hear live music.
“My older brother and sisters and I used to go to the local jazz clubs in San Francisco, and I grew up listening to jazz there at The Black Hawk. My dad Clem had grown up in Texas, so he had a habit of listening to a lot of country & western stuff and ballads that he had heard as a kid. He liked music from movies and theater. So, gosh, I wanted to sing everything! And then I began studying voice with Connie Cox, an opera singer, starting from when I was about 13, for about five years. She influenced me a great deal.”

How did she help you develop as a vocalist?
“The most important thing she felt for me as a young voice was she didn’t want to harm my voice. One day I’d come into the studio sounding like a little girl, and then the next day I sounded like [baritone bandleader] Billy Eckstine. She was very, very conscious of not rushing me into the full male voice. We tiptoed around a little bit until I was about 15 or 16, and then my voice settled in.”

Your dad must have been pretty proud about how things turned out with your career. You two were very close, right?
“Yes. I used to watch him sit and listen to my recordings, and his face lit up. He was the happiest person in the world. My dad was my best pal, and the man who I loved most in the world. I wanted to help him release some of the tension he had raising seven kids, as he and my mom were domestic workers — anything I could do to make him happy. And he was over the moon about the music.”

Songs of yours like Chances Are, It’s Not for Me to Say, and The Twelfth of Never are what we consider to be standards today. Wasn’t that actually one of your ideas — to set the standard for pop material?
“Well, I knew I wanted to sing in a pleasant manner. I had grown up listening to my dad, and that’s who I wanted to emulate. And with these little love songs, I got an opportunity to sound that way, and it kind of stuck with me.

“Later on, of course, I utilized the operatic training I had from my voice teachers, and branched out a little from there. But from the beginning, most people think of me as a ballad singer.” Johnny Mathis found out early what he could and couldn't do as a daily routine to protect his voice.

Is it true that in your 1957 single Wonderful! Wonderful! when you sing the line about “walking by the sea,” you were actually thinking of the Atlantic Ocean rather than the Pacific?
“Yes, the East Coast! I never even thought of the West Coast; how strange! (laughs) But I do sing it in a truncated way now in all of my performances. I just do it with the rhythm section, because it’s a charming little song. And people love it; they love it! I love that song too. To this day, it’s one of my favorites. It’s very unpretentious, and I always think of it as a beach song.”

You’re now undertaking your 60th Anniversary Tour, and your voice hasn’t lost a step at all. What’s the secret to keeping it in shape?
“From the beginning, I haven’t had any real vocal problems. I found out very early on what I could do and what I couldn’t do as a daily routine to retain my voice. There were a couple of instances where I got laryngitis, and it was the most horrible feeling in my life. Something that was me was gone, and I was frightened to death. That scared me into a process of taking care of my voice. No matter where I was, I was very conscious of the fact that I was going to have to sing relatively soon, so I’ve been a little bit fanatical about it.”

You still work out, don’t you?
“I realized that I’ve got to be sound physically to support the tones. The habits that I had growing up have stayed with me all my life. I don’t mind the workout routines I’ve had to go through; I’ve kept those. I’ve been working out now with a trainer for 13 years. From the very beginning, I was an athlete, and I almost got to go to the Olympics as a high-jumper. I used to hang out with the great basketball player Bill Russell. He and I were buddies, and we’d travel and run track together in different parts of California.” Mathis will sing certain songs with just a guitar or piano in concert with no orchestra. “That’s been a big revelation to me.”

Did you ever receive any good advice about how to take care of your voice?
“Yeah, absolutely. When I started having hit records, I used to go to the opera, and I had a chance to go backstage and meet the singers. And they told me exactly what I just told you — ‘You’re going to want to sing all your life, so be a little fanatical about taking care of your voice.’ They did some extraordinary things vocally to maintain their voices, like go for long periods of time and not talk. Along the way, I had to find out what works for me.”

What can we expect to hear live once you take to the stage at Agua Caliente?
“There are a couple of songs, very simple songs, I choose to sing with just the guitar. That way, I get away with not getting too hyper about the accompaniment or overproducing those simple songs. I’ve been able to do them in different ways — just with a guitar or just with a piano, and not have the orchestra come in. That’s been a big revelation to me. The people really like to hear my voice. I get disappointed if people say they thought the orchestra was too loud.”

Finally, what continues to inspire you musically?
“It’s the most amazing thing, when the two elements of the voice and the musicianship  come together. When I’m in a quandary about what to listen to or what I want to hear, I listen to someone who does everything so perfectly, like Pavarotti. And then I realize, it doesn’t really matter what the song is — you can always do it at such a high level that it will be in sync with the audience. That’s what motivates me. Whatever you do, or whatever you decide to do, make sure it is the best of the lot. You never know who’s listening to you.”