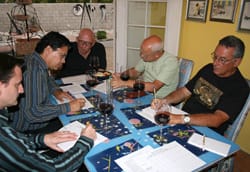 After talking to experts about Robert Parker and his wine-scoring system (and whether the wine-consuming public can discern the difference between an 88-point wine and a 90-point wine), I wondered how my own wine-loving friends would fare in a comparison tasting.

Because my friends have a strong preference for reds, I selected for my experiment a Qupé 2003 syrah, a Rosenblum Cellars Heritage Clone 2004 petite syrah, an O’Brien Family Vineyard 2001 merlot, and a Chateau St. Jean 2003 cabernet sauvignon. I printed for each of my guinea pigs … I mean, friends … an explanation of Parker’s rating system and how he breaks down his scores. Then I prepared a form with the categories as used by the world-renowned expert: base (always 50 points), color and appearance (1-5 points), aroma and bouquet (1-15 points), flavor and finish (1-20 points), and overall quality (1-20) points. I also provided a place to enter tasting notes.

Devising my own two-tier scoring system for this party … I mean, experiment …, the lowest score (in other words, the least difference between my friends’ Parker scores and the real Parker’s scores) would be combined with bonuses for using words in their tasting notes that Parker used in his. For example, if someone was off by two points on a wine, but mentioned, like Parker, the wine’s ruby color, their score for that wine would be one.

I let the group “warm up” their palate with an O’Brien Family Vineyard 2002 merlot while I explained the rules (Rule 1: Never explain rules without wine).

Despite the warm up, after I poured the first Parker-rated wine (the syrah), the group became quiet. With freshly sharpened No. 2 pencils poised over their forms, they swirled, sniffed, and tasted. I waited (OK, I tasted too).

“Yummy,” said Michael K., writing the word on his form while Richard pointed out that “yummy” was probably not in Parker’s wine-scoring vocabulary.

“A little bit of Luden’s,” Pat said, referring to the cough drops.

“I can’t taste any berries,” Steven said. “It has a wood flavor.”

“It would have to be a very aromatic wood,” Michael K. said.

It was clear to me that my guests were going to follow my earlier direction to have fun with this test … I mean exercise.

Steven shared his tasting notes on the third wine, which read in part as follows: “Has an evaporative scent I can feel in my eyes. This must be accompanied at the dance with a heavy Sicilian red sauce. Leaves a heavy taste on the tongue, which can be good when sitting next to a fireplace on a snowy night.”

“Yeah, well, I kind of covered that with ‘complex,’” Michael K. said.

I have to admit that at this point my own notes become a little sketchy, but the above offers a fair description of how the evening went.

In the end, it was Michael C. who won with a score of 0: He was off by five points overall, but won five bonus (subtractive) points for mirroring Parker’s notes of “cherry” (with two of the wines), “easygoing,” “vanilla,” and “black fruit.”

Here’s how the scoring broke down:

Qupé 2003 Syrah
Parker gave this wine 87 points. Three of my friends gave it 88 and two gave it 90. They agreed it was an easygoing wine, and four of them picked out the cherry that Parker noted. Parker also noted herb-like characteristics, while three in my group detected wood.

Rosenblum Cellars Heritage Clone 2004 Petite Syrah
Parker gave this wine 92 points. Michael K thought he would have given it 90, Pat nailed it, Michael C and Richard gave it 93, and Steven gave it 96. Oddly, all of my friends picked up chocolate qualities, whereas Parker did not. Less oddly, none of my friends mentioned the aroma of crushed rock that Parker listed — and, frankly, none of us were sure we would recognize the smell of crushed rock in, well, crushed rock.

O’Brien Family Vineyard 2001 Merlot
Parker gave this wine 86 points. My friends’ scores spanned a whopping 10-point range: 80, 87, 88, 89, and 90. This time, Parker agreed the aroma included cherries; or, more to the point, two of my friends agreed with Parker. In fact, Richard called it “cherry on steroids.”

Chateau St. Jean 2003 Cabernet Sauvignon
Parker gave this wine 90 points. Richard and Michael C nailed this one. Two of my friends gave it 89; one gave it 85.

Conclusion
Total scores ranged from 0 to 12; but for individual wine scores, my friends generally came within a couple of points of Parker’s ratings. So perhaps that lends some validity to Robert Parker’s authority. I’m sure he’d be happy to know that.