New work by Charles Hollis Jones will show at the February 2022 Modernism Show and Sale.
PHOTOGRAPHY BY ALEC WOLVEC

No need to call Charles Hollis Jones and say you’re penning a retrospective. Jones doesn’t have to talk about his celebrated past. He’s living in the moment, exhibiting his most recent work, and designing new furnishings and accent pieces with the untamed energy of a millennial. Each piece, however, manifests through a lens fine-tuned from more than four decades of prolific experience, and counting.

The lifetime of Lucite for which Jones is renown has made him a household name the world over. When his parents encouraged him to leave their Indiana farm, fate landed him a job at an L.A. Lucite factory at age 16. “My brother introduced me as a designer, so that’s what I was hired to do,” he says. “Lucite, now luxurious, was once seen as a novelty.” 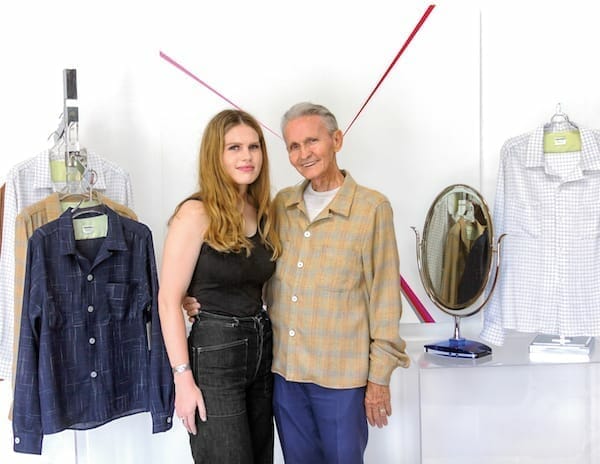 Clients, friends, and collaborators were often one and the same, and still are. Tennessee Williams, Lucille Ball, Dean Martin, John Lautner, John Elgin Woolf, and Sly Stallone are among the sundry cast of characters comprising Jones’
fabulous design chronicles. Selling to Arthur Elrod early on, he says, helped establish his name.

This past July, Jones participated in a show at WNDO Gallery in Venice Beach, founded in 1994 by artist Jim Budman. The timing was perfect; Jones had just received completed samples of new work. He invited 60 people, and 140 came. Everyone knows there is no such thing as a small Charles Hollis Jones show. But for the man who answers to “Mr. Lucite,” it was all “a very pleasant surprise” as the opening fell on his birthday and included a fancy custom cake.

Guests were the first to see — and see through — some of Jones’ latest concepts, which span translucent showpieces to furnishings that qualify as late-breaking career highlights. Some are entirely new; others are reinterpretations of previous ideas. Most raised eyebrows with a breakout facet Jones has reunited with recently: the use of color. 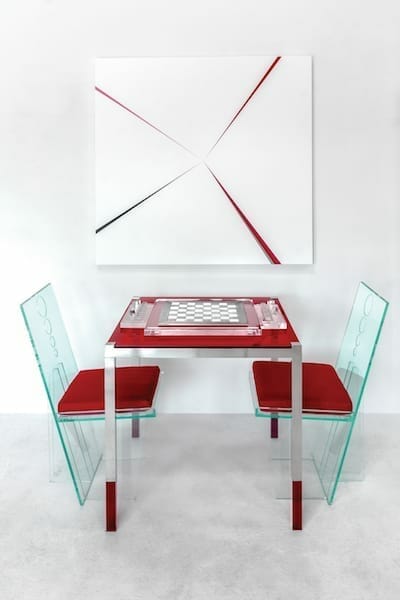 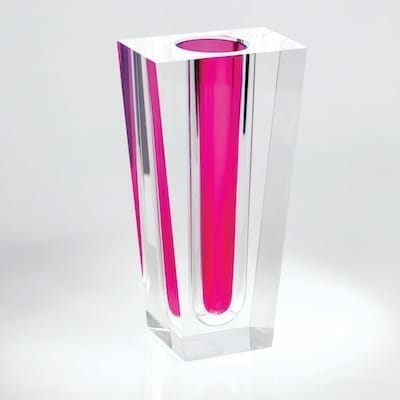 A mirror on a blue base, an angular ice bucket, and dice with colored dots sat atop a bar cart with blue handles and a chrome and Lucite frame. Jones notes its complicated design ensures “no one is going to try to copy it.”

Vases in 2 styles feature a dazzling insert of colored glass that could be mistaken for dyed water. “I worked in glass for nine years when I was younger,” Jones says. “Now I have an artist in Culver City who is a genius with blown glass. It sometimes makes me cry that he’s so talented.”

The Lucite tic-tac-toe game was made years ago for his sister, as it was a game they played on paper as kids. She still says, ‘You always told me you were going to tell me how to win, but you never did,’” Jones says. “Then she tells me, ‘Charles, you need to sell these. Everyone who visits me loves this game.” His new version is updated with color.

Though it wasn’t ready in time for the show, the Arch Line Lucite Arm Chair is just out of production. Jones studied a former design, thinning it out and scaling it down. The result, he says, has more of a 1950s or ’60s look as opposed to an ’80s aesthetic. The new seat and back, between two arching arms, have red or blue sandwiched in the middle. “And it’s a nice custom color,” Jones says. “I think it’s the best thing I’ve done in a long time.” 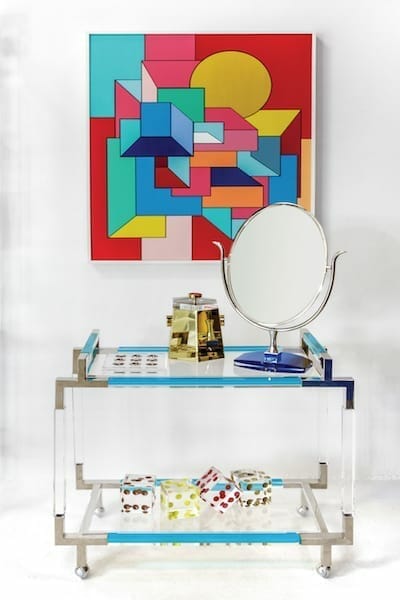 Fashionable always, Jones once modeled sunglasses for print ads. His recent show included the first pieces from a clothing collaboration incorporating vintage deadstock fabric. His partners in style are Chloe, Lucas, and Sonny Bentz, the youngest generation of an architecture and design family he has known well throughout his career.

“I’m very excited about it all again: the color, the clothing,” he says. “And now we’re making airbrushed Lucite surfboards and coffee tables with a California swimming pool and beach scene on the lower shelf. These are all about California culture and causing people to love California all over again. It’s as though it’s all new.” And actually, it is.