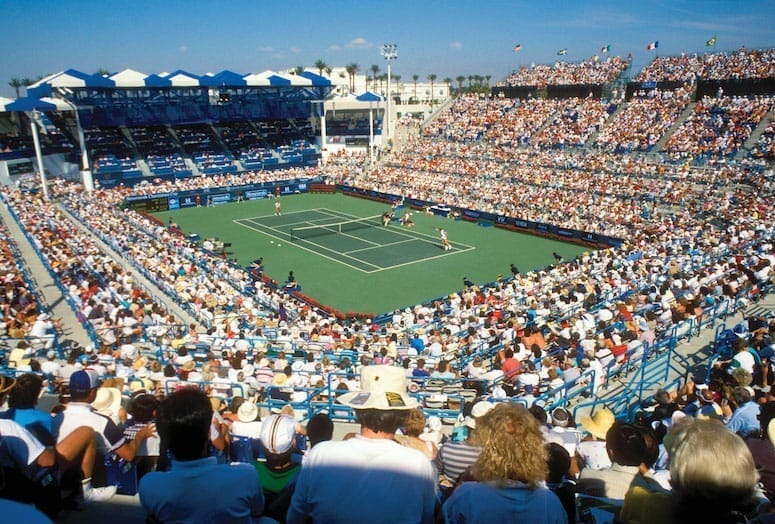 The Grand Champions housed an impressive 1.62-acre hospitality village and 12 courts, including the showpiece stadium, which accommodated some 10,000 seats.
PHOTOGRAPHY BY DIANE JOHNSON/ALAMY STOCK PHOTO

Having retired from professional play in ’79, Pasarell turned his attention to the development of a local tournament. The Puerto Rican champ successfully campaigned in 1981 for relocation of an ATP event previously held in Rancho Mirage to the La Quinta Hotel, where he served as tennis director. Rapid growth through the early ’80s demanded more space, and Pasarell was part of a team that designed new facilities in Indian Wells. The Grand Champions housed an impressive 1.62-acre hospitality village and 12 courts, including the showpiece stadium, which accommodated some 10,000 seats.

The property hosted until 2000, when the tournament (now the BNP Paribas Open) moved to its current home: Indian Wells Tennis Garden. In 2013, the now 530-room resort rebranded as Hyatt Regency. Over the years, it has undergone major renovations and only three courts remain, one of which is used solely for pickleball.

Backhand in the Day

Tennis buffs can still experience the resort’s history as a preeminent tennis destination. An array of vintage imagery of past tournaments and players hangs in a lobby nook, and resort guests can book one of the remaining courts for a match.  indianwells.hyatt.com

• READ NEXT: When John McEnroe, David Cup Came to the Desert.