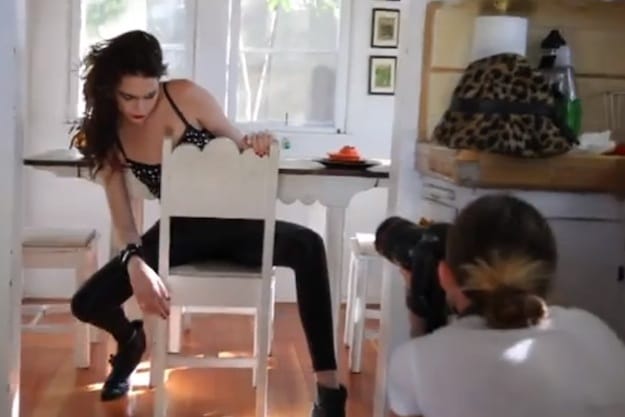 Looking good and feeling good are often at opposites ends of the spectrum, according to film director Brent Huff.

“Our society spends more on beauty than on healthcare,” Huff says. “We strive to ‘look good’ versus being healthy.”

Huff, a former Ford model who appeared in GQ, Vogue and Glamour, tackles the question, “What price, beauty?” in the film, “Chasing Beauty – the Ugly Side of Being Pretty”, which explores the dark side of modeling and fashion. Huff (pictured at left) will appear for a Q&A session following a special screening of the film at 9 a.m. Aug. 17 at Camelot Theatres in Palm Springs. Presented by the Desert Film Society, admission is free to members and $15 for non-members.

The American public’s obsession with achieving a standard of beauty translates into a billion dollar business of seemingly glamorous models, a luxurious lifestyle, and the promise of fame. Huff gives filmgoers a rare view of the sacrifices young men and women in the business struggle with – the physical demands, the toll on body image, and emotional and financial investments models face.

Released in April, “Chasing Beauty” has skyrocketed in popularity. In addition to being crowned Best Documentary at the Riverside Film Festival, according to its website, the film has been rated the No. 1 fashion documentary on the IMDB roster as well as the No. 2 rented film on iTunes. The “Chasing Beauty” Facebook page has become a worldwide phenomenon cataloging news, people, and events in the fashion and modeling industry.

Huff (pictured right) candidly opened up to palmspringslife.com about what he calls “the good, the bad, and the ugly underbelly of the beauty industry.”

What prompted you to do this film?
As a model in the industry for so many years I have access to fashion and beauty industry insiders. I wanted to explore the truth about the pursuit of beauty. To show that the model you see is not always the person as they are.  Almost every photo is photo-shopped to produce a look to market a brand. It is a really unrealistic view of beauty. I wanted to take an honest look at the beauty industry, this crazy world, and how physical beauty can be quantified.

What do you mean by quantified?
Well, beauty has its price. It is subjective to what one is willing to do but beauty is, certainly, a currency that gives reward and allows you attain things. Beautiful people tend to make more money in the workplace and are often given special treatment. For example, there is an experiment that you can do at almost any event, but let’s take a live pro-basketball game. Look at the court seats with the very attractive people and then go up the rows and look at the cheaper seats. People will almost always agree who is the best looking.

So what is the cost of beauty – is it worth it?
Definitely, beauty does matter.  You do get perks.  But the reality is that we all cannot be size 2 and 5-foot-11. We all do age. At end of the day, if you put all of your eggs in the beauty basket, you are going to have a fall because it’s truly inner beauty that matters.

Why do you think this documentary has hit a nerve with the public?
It’s a voyeuristic view into a very exclusive world that many dream about.  It’s said that between the ages of 13-18 years, 32 percent of girls want to be models. For many young people facing daily social judgment about their appearance, attaining this level of validation as a model, a person of beauty, seems to say ‘I matter, I’m attractive.’ But there are sacrifices made in the fashion and beauty industry that many never get a glimpse of.

You took a risk as an insider exposing the negative impacts of modeling. Has there been any backlash?
Yes, someone who was unhappy with the film threatened to throw acid in my face. At one point, I felt, ‘I’m a family man and this is not worth it’. But for the most part it has been a very positive experience. W Magazine, Christian Dior, and the Dove Evolution campaign have been very supportive.

Will you continue to explore this topic in the future?
“Yes, we are definitely talking about a ‘Chasing Beauty’ series. It will address issues such as our fascination with youth, how we deal with aging, eating disorders, sexual abuse, beauty pageants, male models and the new metro look. We will also further delve into the question, ‘Does having beauty really make you happy?’ We are, also, currently crafting a cult movie featuring actor and top model Hoyt Richards and his affiliation with the cult ‘Eternal Values’.  This ‘Chasing Beauty’ spin-off is the result of the DVD producers asking if we could put "extra's" on the DVD. Extras on a DVD usually mean outtakes, deleted scenes, director's commentary, etc. We gave the cult story as our extra then realized we have something special we could make into a feature film. Hoyt is this amazingly successful man, a Princeton grad, and I think it will be interesting to explore his perspective on what makes people beautiful.”