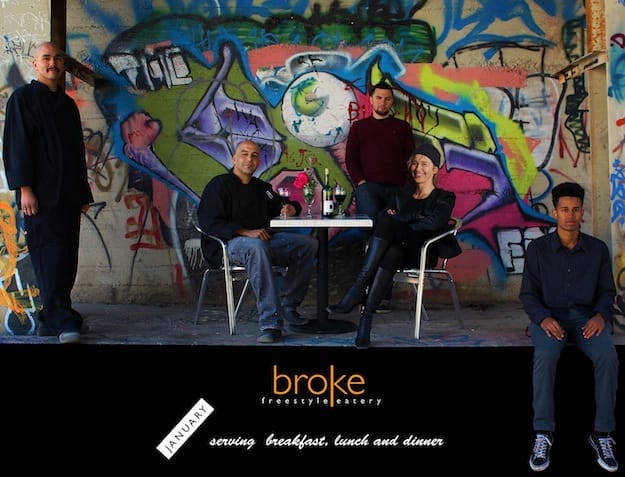 Most afternoons, chef and restaurant owner Kitamba Satcher can be found handing out samples of cornbread, jambalaya and other creole cuisine in the La Quinta Village Shopping Center parking lot.

His goals are simple: To share his passion for food with the local community and to get the word out about his new restaurant, Broke Eatery.

The inspiration for the name came when Satcher and his girlfriend, artist Olja Dobrovic, saw the word “broke” tagged on a train car in Riverside.

But just before Satcher opened the restaurant last fall, an investor pulled out and Satcher lost $20,000 in funding. Suddenly, the eatery truly was broke.

“It literally brought me to tears,” Satcher said. “I didn’t know what to do.”

That day, La Quinta Salon & Day Spa owner Sammie Freitag stopped by the restaurant to welcome Satcher to the shopping center. After Satcher explained he might not be opening his restaurant, the woman returned with a photo album.

“It was this giant book filled with pictures of her salon when they were getting started,” Satcher said. “Seeing her salon today, I thought there was no way this was the same place. It was a huge inspiration.”

Satcher decided to open in late October, organizing a “Turn on the Lights” fundraiser to introduce the restaurant and raise money for the utility bills. He used his last $200 to buy cornmeal and meat to make cornbread and jambalaya, then prayed that people would come.

“And they came,” Satcher said. “I couldn’t believe it.”

People came to paint the walls, play music and spread the word about the new restaurant. The community’s support was overwhelming, , Satcher said.

“A girl had her birthday party with us that day,” Satcher said. “A man offered to buy our liquor license. Another man donated an espresso machine.”

Satcher earned about $900 from the fundraiser, which covered the utility bills.

But on Christmas Eve, Satcher received a three-day notice to pay rent or quit. He decided to open for breakfast to raise the $1400 needed to stay open.

“We ended up making $1,416 in breakfast by the end of the month,” Satcher said. “It was enough to cover rent, the cashier’s check and the FedEx delivery. I had $2 leftover.”

Satcher continues to offer breakfast, lunch and dinner. His creole menu is inspired by his first restaurant job at Crescent City Creole, whose owner was formerly a sous-chef on Bourbon Street.

The heart of the menu, though, remains creole.

“Creole food started out so it could bring together different classes and races to enjoy food, music and art,” Satcher said. “I’m pleasantly surprised that this kind of food still has legs.”