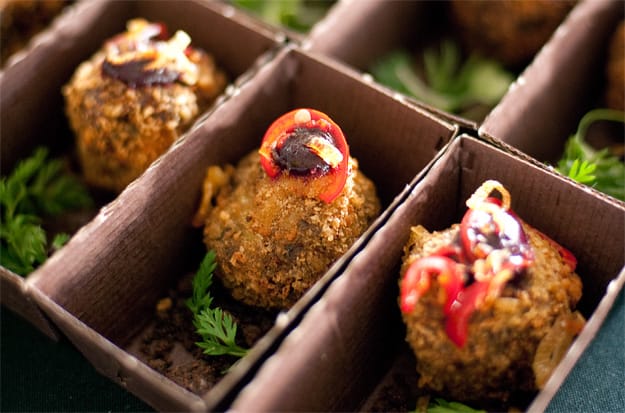 Inside the tent, a marketplace of restaurants and wine sellers were paired to complement each other. The luscious smell of red wines uncorked and resting or the taste of cool, dry white wine, following a spicy, crunchy Asian salad from Escena, resonated beyond the moment.

A dizzying round of demonstrations on four stages included Chris Mitchum, executive chef at Hyatt Grand Champions Resort & Spa in Indian Wells. “I grew up in Missouri, where we grew everything; now it's a trend,” he says “I remember picking fresh blackberries out of the garden.”

As he prepared his India-Pakistan-inspired Korma chicken dish, he continues, “Everything everyone’s doing now — fresh, from scratch, and locally sourced —  we've been doing for a long time at the Hyatt."

Celebrity chef Andre Carthen, walking by during Mitchum’s demo, called out, “Now how do we do this?”

In the next demonstration, Carthen heated mixed nuts in oil to release their fragrance, a great party tip when guests arrive, he says. His bite-sized chipotle spiced brownies were a hit.

The Southern-born Scott reminisced about fishing for crab with her father off the coast of North Carolina using a chicken leg on a string as bait.

Master chef Daniel Joly prepared white asparagus with a hollandaise made with beer, while across the courtyard at the east garden stage, Diane von Welanetz Wentworth whipped up her favorite fudge recipe, as Les Dames member Candi Elm stirred the bubbling melted marshmallows for Wentworth's Belgium chocolate and walnut treats.

But Sara Moulton, food editor of Good Morning America, stole the show on the Green Room stage. She honed her easy, talkative style as a television chef and executive chef for 25 years in the test kitchen at the now-defunct Gourmet Magazine.

She recalls the day she learned about the demise of Gourmet: "I was on a photo shoot at a farmer’s market for an upcoming feature when my cell phone rang. It was my sous chef, very upset. I first thought someone died. And it was: The magazine died. "They gave us one day to pack up our things and clear out.  I had thousands of cookbooks. My husband helped me pack them up. We had 35 boxes of cookbooks."

Moulton prepared beer batter-sautéed shrimp — a recipe she says she “stole” from Cooking Light — with fruit-filled pot stickers, her own invention inspired by pain au chocolate, a baguette layered with a dark chocolate.

Les Dames member Nancy Cohee assisted, preparing all the food in advanec so Moulton could be free to talk. “Something I learned to do as a television chef,” says Moulton, recently nominated as the best TV chef by the James Beard Foundation.

Moulton interned with the late Julia Child in the late 1970s. She said Child had a terrific sense of humor and told her, "Never apologize and never explain when you make a mistake."

“I'm a third generation sausage maker from Chicago,” she says. “And while I still make the same sausages as my grandfather, in the early ’90s, I developed my own line of chicken sausage, which are lighter, healthier.”