An abstract expressionist painter on the side, Chef Gale Gand draws her plating for dessert.
PHOTOGRAPH COURTESY GALE GAND

Get to know this year’s participants — and prepare to dig in. For tickets and more information, visit palmdesertfoodandwine.com.

This nationally acclaimed pastry chef, restaurateur, and culinary instructor first appeared on TV in 1995 alongside Julia Child in the PBS series Baking With Julia. Gale Gand went on to earn fame as the host of her own series on Food Network, Sweet Dreams, on air for eight years. She has received two Michelin stars and two James Beard Awards, was inducted into the Chicago Chefs Hall of Fame, and has written eight cookbooks. In the kitchen, you might find her listening to the soundtracks of Wicked or Hamilton, Lil Nas X, Doja Cat, or Trini Lopez. Out of the kitchen, Gand raises chickens and dabbles in abstract expressionist painting. She credits her college painting teacher, Moe Brooker, with being the biggest culinary influence in her life. 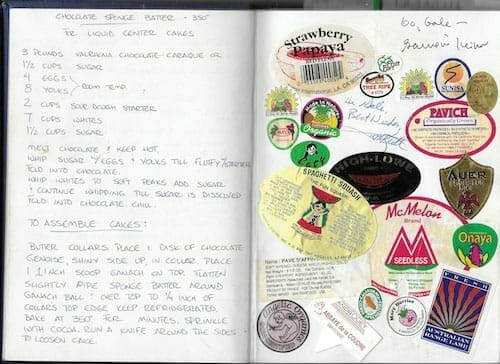 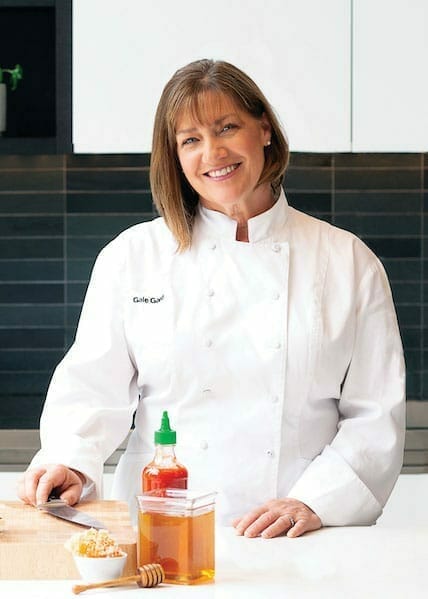 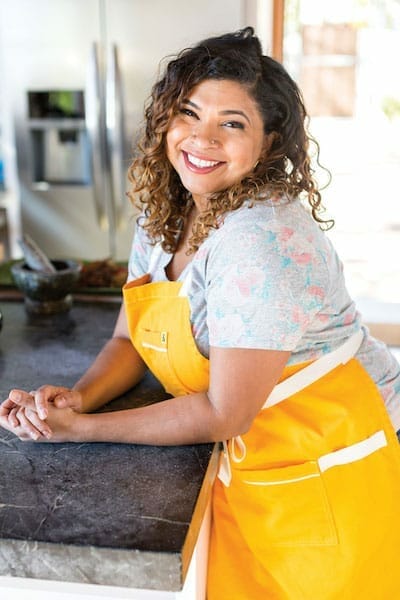 “Breaking bread together breaks boundaries,” Aarti Sequeira says. The television personality and cookbook author — who traded a career in broadcast journalism at CNN for a chef’s coat and found fame after winning Season 6 of Food Network Star — sees food as means of introducing people to new cultures. Born in India, raised in Dubai, and educated in a British school, Sequeira grew up accustomed to a varied tapestry of culinary styles. Now, through her Food Network series, Aarti Party, and guest spots on other shows, she aims to teach viewers how to incorporate unfamiliar ingredients from the international aisle in simple, weeknight-friendly dishes.

“ ‘Behind!’ because my husband always yells it when he passes behind me in the kitchen and gives me a quick goose.” 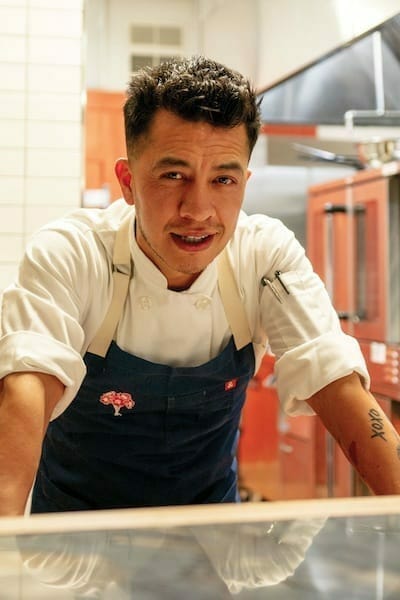 Born in Mexico and raised in the Coachella Valley, Gabriel Woo has developed a reputation for serving elevated farm-to-table fare in chic settings. He is a partner at Bar Cecil, where he also serves as executive chef. The newly opened hot spot, decked in bold wallpaper and even bolder artwork (including an original Warhol), serves contemporary bistro fare with decadent options like fine Ossetra caviar and Australian wagyu. Woo has received accolades from The Wall Street Journal and Condé Nast Traveller for his localized approach to cuisine, and in 2019, he was invited to cook at the James Beard House in New York. 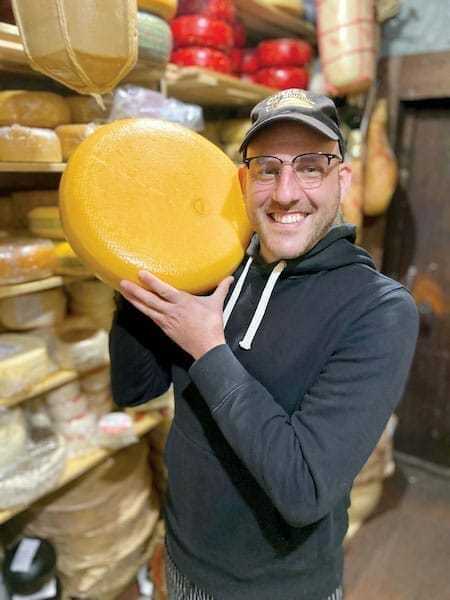 Third-generation cheese shop owner Afrim Pristine was recognized by a prestigious dairy association in France in 2013 and earned the title of maître fromager, French for “cheese master.” He is the youngest person to do so, and the first Canadian. (No surprise, because he trained with some of the world’s top cheesemakers and collaborates with Michelin-starred chefs.) Since then, Pristine has released a bestselling cookbook and landed his own Food Network Canada travel series, Cheese: A Love Story. His signature dish, he shares, is a burrata and peach salad with white balsamic vinegar, mint, and marcona almonds. “It’s so fresh, clean, and tasty.” 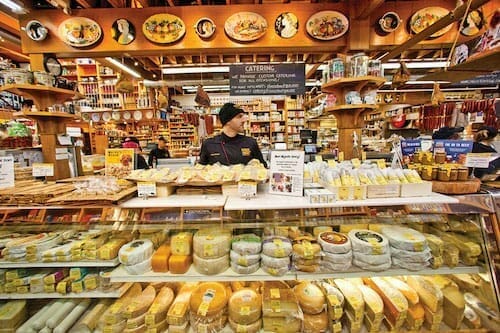 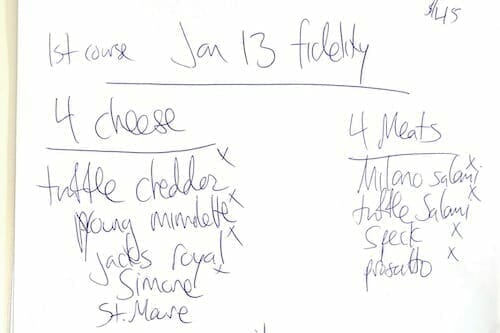 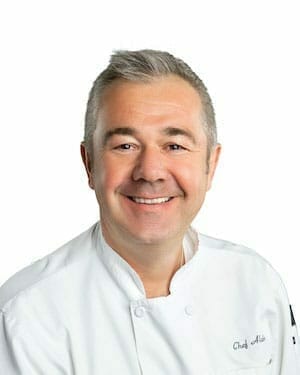 Before he became the executive chef at Toscana Country Club in Indian Wells, Alain Redelsperger, originally from Strasbourg, France, worked in some of the top kitchens in Paris, New York City, and San Francisco. His greatest influence and mentor was the late, legendary French chef Michel Richard; Redelsperger served as Richard’s chef de cuisine when he was 26 years old. Upon moving to Greater Palm Springs in 1997, he became the dining room chef at The Ritz-Carlton, Rancho Mirage (the only four-star dining establishment in the area at the time) and, later, at The Vintage and Mountain View country clubs. 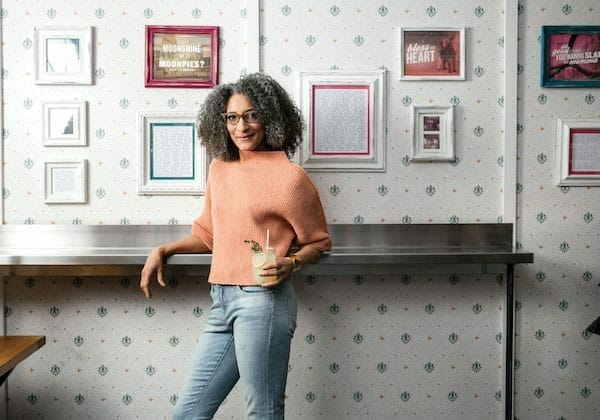 “Most, if not all, of my ingredients are pretty traditional and approachable for the home cook,” Carla Hall says. “I’m completely content with ‘less is more’ and letting the ingredients speak for themselves.”

Carla Hall thrives when she’s busy. She cooks (of course), appears regularly on the small screen as a host and culinary judge, has a forthcoming Discovery+ show called Foodways, and has authored children’s books and cookbooks. Originally from Nashville, Hall gravitates toward Southern cooking and is known for putting a lighter, more healthful spin on soul food favorites — an homage to the Sunday suppers she enjoyed as a child at her grandmother’s house. 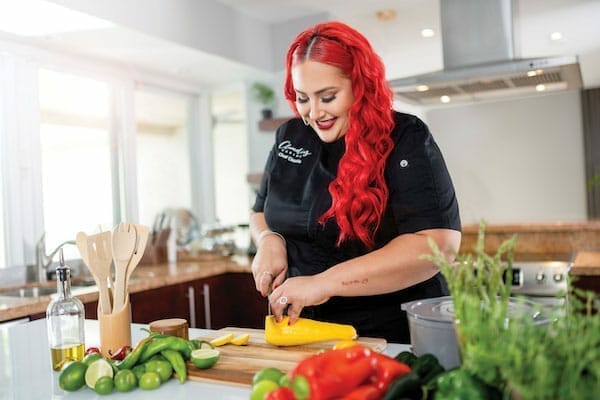 Born and raised in San Diego to a family originally from Mazatlán, Sinaloa, Claudia Sandoval grew up with her mother and grandmother, who taught her how to cook from a young age. Her signature style is a modern take on Mexican coastal cuisine, and her most-used kitchen tool is a molcajete.

"My ultimate dream is to show the value of not just Latin cultures but all cultural food,” says Sandoval, who won Season 6 of MasterChef and has served as a judge on the last two seasons of MasterChef Latino. (She is currently filming her own series.) “Cultural foods are just starting to become ‘trendy,’ and it’s about time. There is so much more to gastronomy than what is covered in any culinary curriculum.”

“When someone is looking for something quickly, we call out, “Eyes!”, and everyone looks around their area to find something that may be lost. Teamwork makes the dream work.” 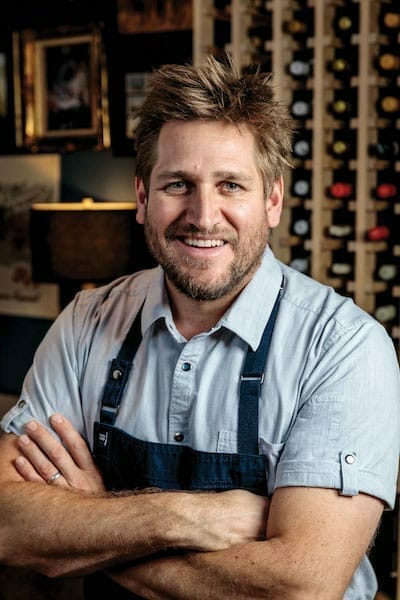 Curtis Stone is a Michelin-starred chef, restaurateur, author, media personality, and businessman who focuses on simple recipes and wholesome ingredients. He began his cooking career in his native Australia and sharpened his skills at Michelin-starred restaurants in London before becoming a culinary host on TV. Stone oversees three restaurants: Maude in Beverly Hills, Gwen Butcher Shop & Restaurant in Hollywood, and Georgie in Dallas, Texas. “We’re in the midst of reconceptualizing Maude, working on new television projects, and I’m finally able to return to Australia after two years to conduct business there and hug my Aussie family,” he says. Life is good, and he’s excited for what’s next.

“ ‘Oui, chef!’ It’s not an ego thing — it’s an acknowledgment, like, ‘I heard you.’ Kitchens are bustling and noisy and communication is key to keep up the pace.” 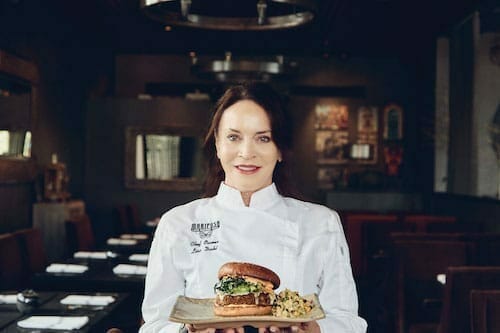 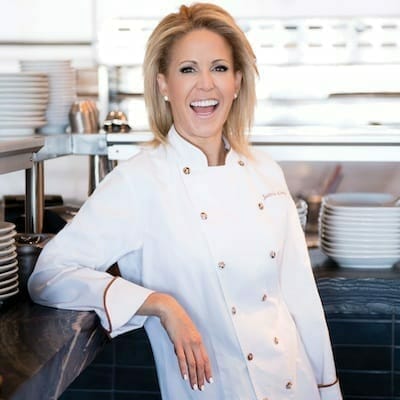 Longtime radio personality Jamie Gwen hosts “Food & Wine With Chef Jamie Gwen,” a nationally syndicated talk show that you can stream via iTunes Podcasts. Each week, the chef and certified sommelier sifts through ingredients, food news, and pop culture with the day’s top culinary thinkers. Gwen trained at the Culinary Institute of America, has released seven cookbooks, and has appeared on-screen alongside luminaries including Gordon Ramsey, Martha Stewart, and Emeril Lagasse. (Of the latter, she shares: “His passion and joy of cooking have tremendously influenced me.”) Gwen’s signature dishes are maple-bourbon pork chops and a shrimp scampi that would no doubt make Lagasse proud.

“I have always loved ‘amuse-bouche,’ loosely translated from French to mean ‘to amuse the mouth.’ But I like to think of it as a gift from the chef — it is served to tease the palate and give you an idea of what delicious things are to come from your meal.” 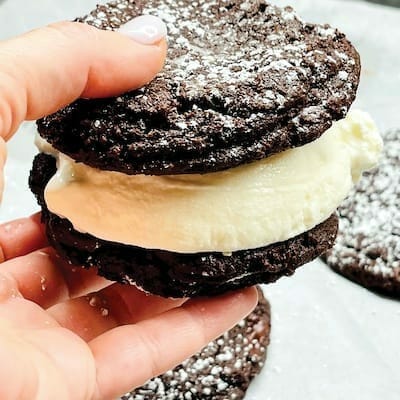 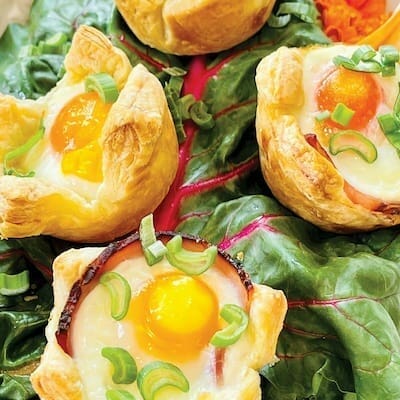 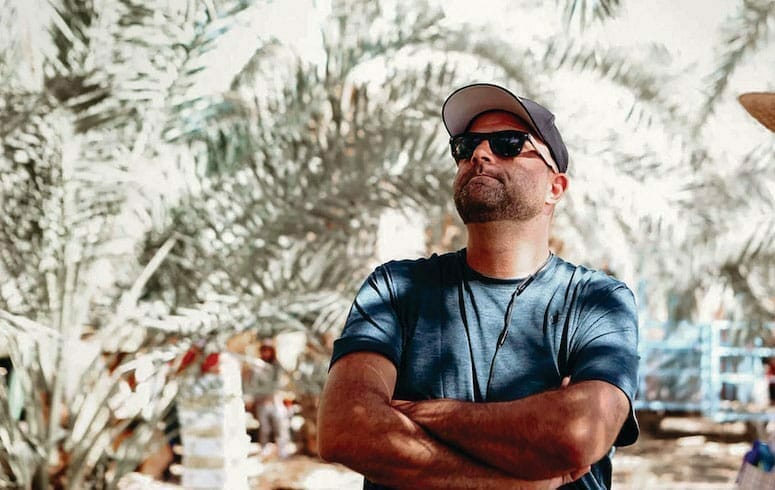 Date farmer and co-founder of the Date Harvest Festival

Second-generation date farmer and former restaurant chef Mark Tadros grew up in the Coachella Valley, where he now runs his family’s sustainable date palm ranch, Aziz Farms, in unincorporated Thermal. Tadros enjoys introducing others to the sweet and healthful fruit so much so that in 2019, he co-founded the Date Harvest Festival. During the pandemic, he teamed up with Tony Marchese of TRIO Restaurant in Palm Springs to launch CV Harvest Box, which supports area farmers and offers locally grown produce delivered weekly. “I have had a huge focus on sourcing local,” Tadros says. “We need to give back to our communities we live in first, and source as direct as possible.

“Mirepoix: a combination of celery, carrots, and onion primarily used in soups, stocks, and sauces.” 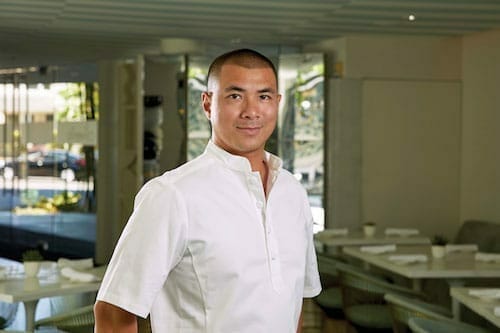 Executive chef at SO•PA and The Colony Club

Michael Hung began his culinary career in New York City, where he dropped out of culinary school to do extended stages at acclaimed restaurants Daniel and Aquavit. He then followed his heart to San Francisco, where he worked for nearly a decade, eventually becoming chef de cuisine at Roland Passot’s Michelin-starred La Folie.

In 2013, Hung moved to Los Angeles, and this past fall, he relocated to the Coachella Valley, where he now helms the kitchens of SO•PA at L’Horizon Resort & Spa and The Colony Club at The Colony Palms Hotel, both in Palm Springs. He has garnered superlative critic reviews, and he notably consulted on the Oscar-winning animated film Ratatouille alongside greats Thomas Keller and Guy Savoy. 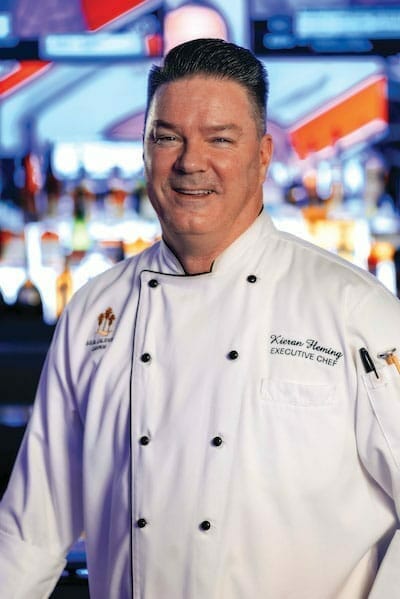 This native New Yorker has moved several times and lived in many different cities and states, along the way developing a taste for diverse foods and gastronomic customs. He became a chef later in life — in addition to his culinary degree, Fleming also has a degree in criminal justice that he put to use for 11 years in law enforcement before turning toward his real passion. “I truly love my career and enjoy sharing my knowledge and what I have learned with anyone willing to listen,” he says. Now, in his post at Agua Caliente Casinos Rancho Mirage, he has cultivated an enthusiastic team along with creative menus that showcase local produce and seasonal ingredients. 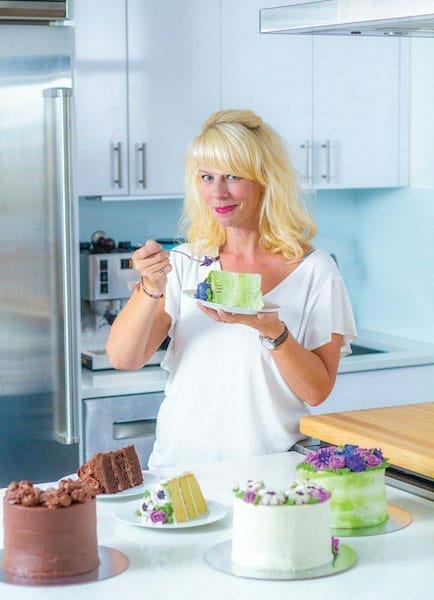 The love affair with sweets started early for Paulette Goto. She made her first loaf of bread from scratch when she was 8 years old, and she honed her cake-decorating skills through high school. After studying at the French Culinary Institute, Goto landed opportunities to work with chocolate master Jacques Torres and cake-decorating maven Colette Peters; she has also enjoyed guest spots on a variety of culinary TV shows. “My entire world is food,” Goto says. “If I am not making food, I am reading a book about food or food history.” Growing up, meals were inconsistent and food was sometimes scarce, so in her own home, family mealtime is always a priority. “The ceremony of eating dinner together is my love language,” she says, “and I love this time with my daughter.” 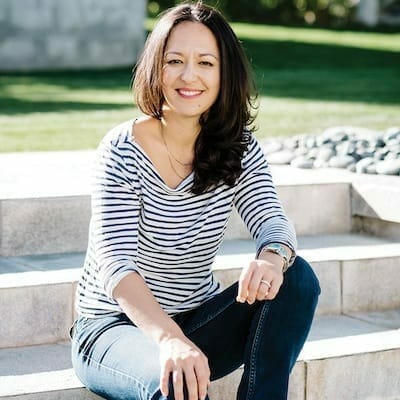 Opening the über-popular Palm Springs brunch spot Cheeky’s in 2008 led chef and entrepreneur Tara Lazar toward building one of the desert’s leading hospitality groups, F10 Creative. The Coachella Valley native, along with her team, brings an innovative and localized direction to each of her ventures, which include a speakeasy, a hotel, a Tiki lounge, a catering and events company, and four restaurants (one of which is in Oceanside). She credits her success to good old-fashioned hospitality and her hands-on approach, from crafting the menus and cooking on the line to designing the spaces — that and the “made from scratch” ethos that started it all with the inception of Cheeky’s. 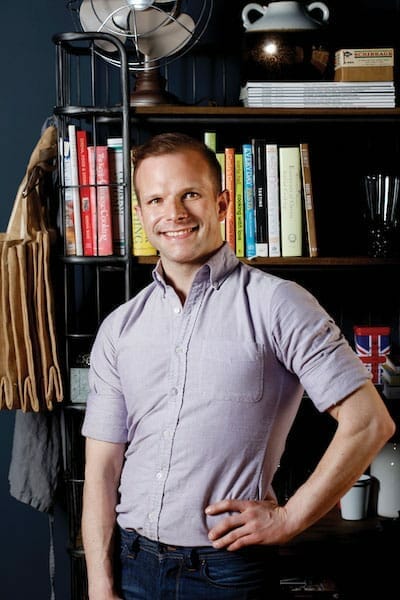 Influenced by his roots in art and costume design, Zac Young adds a dash of theatrics to everything he bakes. The public got a taste when he vied for the title on Bravo’s Top Chef: Just Desserts, and a few years later, the magazine Dessert Professional ranked him among the Top 10 pastry chefs in America. He trained under renowned chefs, including Thomas Keller and Philippe Givre. Now, Young serves as executive pastry director of Craveable Hospitality Group and is the chef/owner of PieCaken Bakeshop, which ships his beautiful creations nationally via Goldbelly. He says his cooking style is most influenced by “the grandmothers of America,” and if there’s one thing he learned during the pandemic, it’s this: “Leave the sourdough to the professionals.” 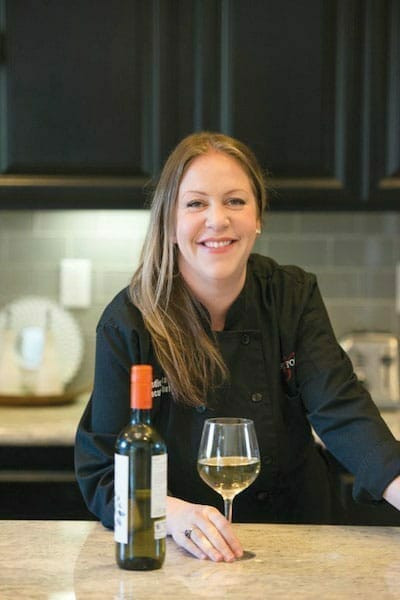 Chef Andie Hubka has garnered international recognition for her playful takes on farm-to-table fare. The Palm Desert Food & Wine veteran owns multiple restaurants locally: Heirloom Craft Kitchen and Tu Madres in Indio and Cork & Fork in La Quinta. She founded a culinary school and event space called Cooking With Class, also in La Quinta, and in 2019 had the opportunity to cook at the James Beard House in New York City. “I think I’ve been an entrepreneur since I was a kid,” she has told Palm Springs Life. “I love to create experiences.”

• READ NEXT: Wine Expert Trio Weigh In on Best Pours to Taste This Spring.