Childhood Influences Bring out the Blues in ZZ Ward 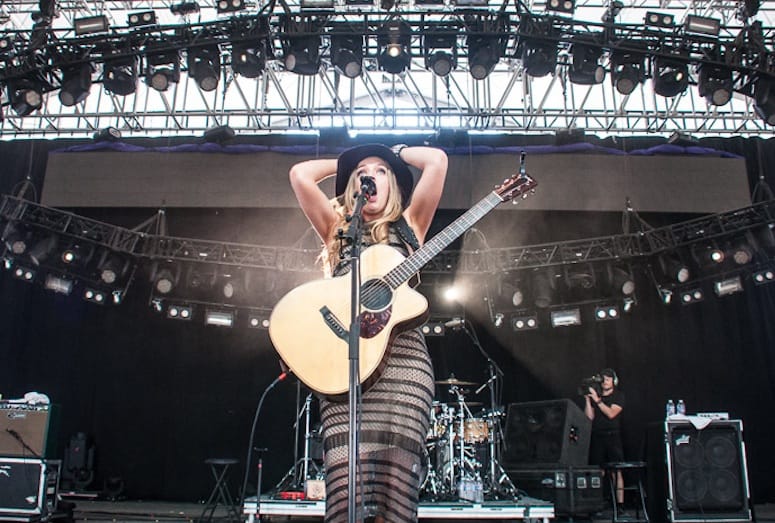 ZZ Ward's third time at Coachella 2014 was a charm for the blues singer-songwriter.

Her previous trips to the Empire Polo Grounds in Indio were as a fan. However, she found the best way to attend the festival is “as an artist”.

Her most recent appearance came in the Mojave tent where she wrapped up her “Last Love” tour.

Her summer tour includes a stint with blues legend Eric Clapton, a brand of music Ward has known since childhood.

Her hit song Put The Gun Down inspires the old school blues soul within her.

Reinterpreting current music with her own special twist, she performs a special version of Drake’s Hold On, We’re Going Home when performing live.

Ward took a moment to speak with Palm Springs Life. How were your Coachella 2014 experiences?
“Being here both weekends, and with being on a smaller stage, you never know what’s going to happen. There was such a large turnout. It was so great. I was really happy about it. Both weekends were very special in their own way.”

Where does your attraction to blues music come from?
“It comes from my parents having gotten into the blues when I was younger. They listened to Muddy Waters, Big Mama Thornton, and Robert Johnson. That’s what they were into so it was always playing in the house. I just love it.”

You did a cover live at Coachella, can you talk about it?
“We took a Drake song [Hold On, We’re] Going Home and flipped it into our own, and made it into a blues song. It was interesting because it’s not made like that, but we made it into our own. I love that song. It sounds like it was written in a different era. It’s great as an artist to be able to work with someone else’s material. It works really well and seems to go over very well with people.” You seem to have a dark side with titles like ’Til The Casket Drops and Put The Gun Down. Where does that come from?
“I guess that’s just me. A lot of people have a dark side, and elements about them that make them who they are. It’s all about balance. I think as an artist, being a songwriter gave me the opportunity to do something with that “dark side”. If you can channel that into something creative, it’s a great gift.”

A you a fan of Eric Clapton?
“I think Eric Clapton is a legend, his days from Cream, to all of his blues stuff. He also played on one of my all time favorite songs ever, While My Guitar Gently Weeps (by The Beatles). So I’m a huge, huge fan. I would do anything. If he asked me to play the triangle with him, I would play the triangle. I would also bring him sweat cloths!”