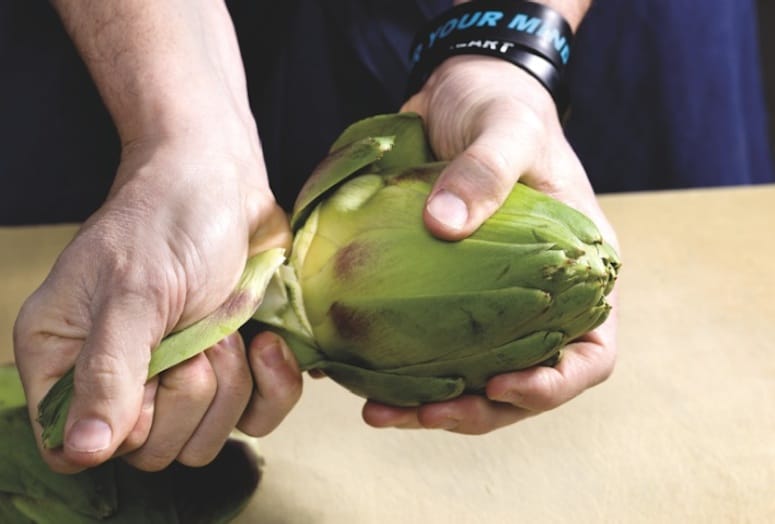 From a mile or two away, the Coachella Valley farm fields appear to slumber this time of year. But pull your car over, shield your eyes from the lingering late-winter sun, and observe. The desert’s multiseasonal bumper crop, artichokes — aka “California’s official vegetable”— stands firm, a prickly green carpet in full flourish.

Journey less-traveled roads and you’ll spot rickety, sun-faded gold and baby-blue pickup trucks bumping along patches of upended land — small producers gathering bushels of artichokes before they steal roadside to entice snowbirds who are out sightseeing and meandering through the valley. Easy targets. As any fledgling architect would tell you, artichokes are a midcenturion’s default companion: bold, unapologetic, visually decisive in whole and in part. Cynara cardunculus var scolymus, aka, the globe artichoke, is a type of thistle and one of the Mediterranean’s oldest cultivated plants.
Photo by Misha Gravenor.

That’s only a slice of the story. When you turn back toward the main drag in the city of Coachella, you notice those old trucks giving way to various forms of machinery and bustling loading docks — a sign you’re approaching Ocean Mist Farms, the Castroville, California company that grows and ships about 90 percent of all artichokes in North America.

“We grow and cool artichokes — and 30 other fresh vegetables — at our Coachella facility during the winter season from December to April,” says Ocean Mist Farms CEO Joe Pezzini, who came to the desert on this cool December morning for the operation’s ribbon cutting with Coachella Mayor Steven Hernandez. As a respectable windbreaker- wearing crowd oohs and ahhs, Pezzini notes, “The facility now has double the cooling and storage capacity and twice as many bays for receiving and loading trucks.”

This optimism seems a little out of place and time, as is speculated by an onlooker during a post-ceremony coffee. That’s a perfectly understandable reaction. That the artichoke managed to find its way into the Coachella Valley is in itself just this side of micro-miraculous. You have to rewind to the fifth century B.C. in Northern Africa to arrive at the artichoke’s genesis, an offshoot of the prickly cardoon.

Chef Nathan Lyon — co-host of PBS’ Growing a Greener World, author of Great Food Starts Fresh, and no stranger to Coachella’s winter artichoke fields — readily testifies as such from his airy kitchen in Los Angeles. “The artichoke can come off as intimidating. Fibrous, thorny, and shrouded in mystery as to how it could be edible,” he asserts.

That hardly impeded the Italians, who embraced the newfangled vegetable once it made its way up through the Mediterranean and into that country. The Tuscan region, with its abundance of fertile soil, was quite hospitable. It’s there where Mugello Valley Chef Cristian Borchi grew up helping at his father’s farmstand. December through March, like the Coachella Valley, was high season, especially for artichokes. “The morellino [deep purple artichoke variety prominent in the Coachella Valley] was abundant,” Borchi recalls. “I remember their earthy smell, the black-stained fingernails of my parents during harvest.” Borchi, chef-owner of Locanda L‘Antica Porta di Levante in Vicchio and Passaguai Cibo & Vino in Borgo San Lorenzo, has artichokes on his menus in various preparations year–round. “Artichoke carpaccio with field greens, new harvest olive oil, and fresh Parmesan is an old Italian go-to.”

The Italy-California connection isn’t random. Italian immigrants first proposed an artichoke farm in California to a landowner in Castroville. That led to a partnership among the Pieri, Del Chiaro, Tottino, and Bellone families who formed the California Artichoke and Vegetable Growers Cooperation in 1924, renamed Ocean Mist in 1995.

It was a business model as tough as the  outer leaves of the artichoke itself. Its headquarters was a wood and tin shed.

They have gone on to become the largest producers in the country and proclaimed Castroville “The Artichoke Capital of the World.”

To grow their thistles year-round, they expanded to Oxnard and Coachella. Pezzini says the artichoke’s nutritional value is often underestimated. “One medium artichoke has 4 grams of protein and a whopping 6 grams of dietary fiber. That’s a quarter of the recommended daily amount, more than one whole cup of prunes.”

Chef Lyon concedes it takes some doing to arrive at this nutritional nirvana. “Snip off sharp tips, remove the top third and the hairy inner choke, ease into the tender heart.” Once accomplished, you have a player poised for variety of preparations. “Artichokes can be braised, grilled, deep fried, even sliced thin for a raw artichoke salad.”

Such versatility is what lures several of the ribbon–cutting attendees from Coachella to Palm Springs’ SO.PA restaurant at L’Horizon Resort and Spa. Word has circulated about what Michelin-starred Chef Giacomo Pettinari is doing with artichokes, working from the ground up, nothing canned or jarred.

The real star of the dish is oft-overlooked flash fried artichoke hearts. The artichoke crowd savors each bite. Crisp and tender with a zingy finish, they become the center of attention.

“Artichokes, when in season, are tender and flavorful and have a bigger payoff than canned or jarred,” Pettinari says. Having trained and worked around the world, he considers his cooking style globally influenced, rather than simply a reflection of his native Italy. So it’s not a surprise to find those gathered here for an artichoke awakening have doubled down on his Confit Durham Ranch Poussin. A main course — much lighter in his skilled hands than it sounds — tender, five-week-old chicken is marinated and cooked in duck fat, plated on a whirling, wispy layer of seasonal apple purée and red wine gastrique, then finished with celery salt. But the real star of the dish is the oft-overlooked, flash-fried artichoke hearts. The artichoke crowd savors each bite. Crisp and tender with a zingy finish, they immediately become the center of attention.

Still, says the chef, in SO.PA’s bustling kitchen, balancing a culinary eight ball of back to back parties while anticipating Modernism Week and Palm Desert Food & Wine demands, he’s not averse to artichoke simplicity. Like Borchi, Pettinari frequently tosses a salad of thinly-sliced raw artichoke and field greens, a SO.PA lunchtime favorite. But he’s equally facile when it comes to a warm artichoke delight for a cool winter’s evening. “Sautéed artichokes in white wine, garlic and thyme. Always a winning side dish.”

The artichoke’s brief moment in the Coachella Valley sun has not gone unnoticed. Early next winter more pickers will be on hand and more than a few cars will pull over for the Three-for-$2! roadside special, and more menus will feature modern dishes: bold, unapologetically artichoke forward — and celebrated season after season. As prepared at SO.PA, L’Horizon Resort and Spa, Palm Springs

INSTRUCTIONS
• Clean artichokes and cut in half lengthwise.
• Heat oil in an 8-quart sauté pan on medium to medium-high heat. When oil starts to smoke, place artichokes, cut side down, and garlic into pan and set heat to medium.
• When artichokes get to a nice golden color, add one teaspoon of salt (or to taste). Then remove sauté pan from heat and add white wine to pan to deglaze.
• Put lid on the pan and place it over low heat. Cook on low for roughly 25 minutes, or until you can pierce the artichokes effortlessly with a knife.
• If artichokes are soft enough, add thyme leaves, squeeze fresh lemon, and add the rest of the salt to the pan.
• Increase heat to medium high and reduce liquid to dry.
• Plate and serve.