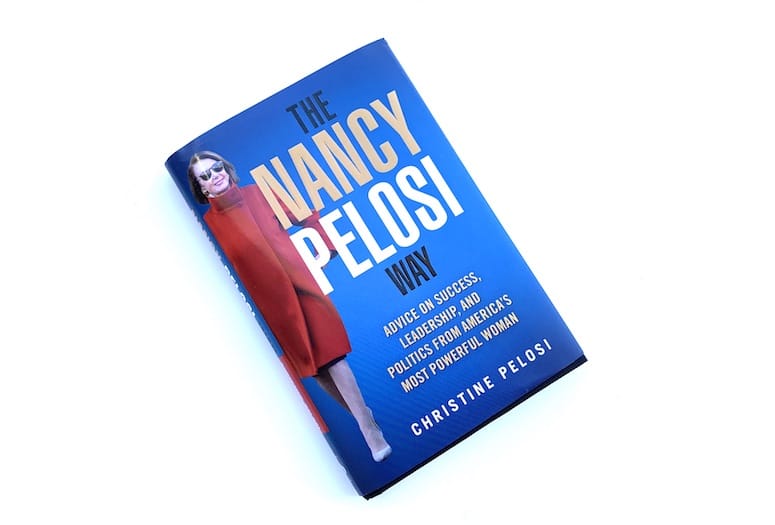 Christine Pelosi will be in the desert Feb. 29 to talk about the book she’s written about her famous mother.

Christine Pelosi is coming to town Feb. 29 to talk about the book she’s written about her famous mother, The Nancy Pelosi Way: Advice on Success, Leadership and Politics from America’s Most Powerful Woman. No surprises here: The Riverside County Democratic Party is sponsoring the 2 p.m. fundraising event (tickets are $25, $50 and $100) at the Palm Springs Cultural Center.

Pelosi, an attorney and advocate based in San Francisco, took time out to answer questions about the book and the event, which Palm Springs Mayor Geoff Kors is moderating.

Was it hard/easy to write about your mom?

Easy. I know her, I know her boundaries, I know the stories, I know what she does, and how she has engaged with grass roots activists for years. In many ways the book wrote itself, I just had to look up the citation for the story or the year of the bill or find the speech. The challenge was that legally I couldn’t interview her or give her anything to review or edit.

Remind us of the law?

She can’t help me make a profit on anything I’m doing. There’s no emolumenting in our home. We believe in rules, we follow them. Under the old set of rules, I could have, but once they tightened, I couldn’t even call and ask ‘What year was this.’ So, I talked to my sister, campaign friends, even journalists. It’s funny, because I would be interviewed by journalists working on books about her [while I was writing this], but at the same time I could not interview her myself.

Then again, you know the material.

Yes, and I know what I wanted to say, and what the publisher wanted. [Publisher] Skyhorse wanted leadership lessons from women; they were going to have a certain rhythm. Actually, it was fun to write.

Would you say the book showcases strategy?

I think you have to appreciate some of the story telling, the history, but too much and the book would be iterative. If you want to know more about her life, read Know Your Power [A Message to America’s Daughters, written in 2008.] If you want to know how to run for office, read my book Campaign Boot Camp. The Nancy Pelosi Way is different. These are the lessons learned, as a young girl, a young mom, a new congresswoman, as speaker of the house. It’s how to build confidence and bring other people. You’re a minority; how do we get more. She says, 'If you’re the first, make sure you're not alone. And make sure you’re not the last.' It’s how to stand up to powerful people, and how to feel comfortable in your power. It’s about claiming the seat at the table.

One thing I found ironic about the book is that just the name will mean ‘partisan’ to some, and certainly it is in terms of party affiliation and policy achievements. But the message behind the anecdotes and stories seem to transcend party.

It’s a book for everyone. Some people who don’t know her well will be surprised. She forms strategic alliances across lines, issue by issue, like with veterans, because that’s really non-partisan. So much that goes on behind the scenes — diplomacy, law enforcement — is non-partisan. People will say to her, ‘I don’t want to be political, so don’t quote me,’ and she won’t. And she’s been good for her word over a long time. They know they can talk to her, that she honors it.

Are we talking about trustworthiness in Washington DC?

She’s very, very, very trustworthy. She likes people and she builds relationships. She talks about being Speaker as being a confidant. The problem with people who whip votes, they want to tell how you got their vote. Other people don’t want others to know, or to keep it private. She gives them whatever degree of privacy they want. A lot of people don’t play with the same sportsmanlike approach to human relations. She is the keeper of many, many secrets.

You write that the recurring theme, in terms of people being interviewed for the book, was the difference between her during her first and second terms as speaker.

I do think this time she is more unplugged, still in that mode of party leader, but the first time she had a more parliamentary view of it. Being unplugged is being convinced of the need to the right thing for the right reasons. The first time she was awed by the power. The second time she knew how to use her power in a different way. It’s all strength, it just manifests in different ways. It’s a different level of confidence from her and from others. It’s earned confidence, that she knows of what she speaks. Her numbers aren’t off.

How about a personal example, an anecdote, of her interacting with people that reflects what you’re talking about?

Publically, some of the people who were the most vocal about telling her she should not be speaker [again] are now her closest confidants. She was able to change their minds, or come to an agreement of some kind. Instead of holding it against them, she built on it, and everyone wins. She knows they’ll tell her what they think, and they know they she won’t hold it against them if they speak their mind. She lets tomorrow be another day. She says, ‘We’ll talk again tomorrow.’ It gives people a sense of calm. And she doesn’t spill beans. So, they confide in her, and they know they’re not going read about it in the papers.

People will say to her, ‘I don’t want to be political, so don’t quote me,’ and she won’t. And she’s been good for her word over a long time. They know they can talk to her, that she honors it.

It comes across as likeability, perhaps the opposite of what the general public might assume about Speaker Pelosi.

She is funnier, wittier, and kinder than what they see on TV. She’s a nice person and people like her. She also loves her job; she likes representing people, likes being around them. She likes helping people make their goals. How can we make things happen across constituencies? A lot of politicians are great about humanity but not good with humans. She’s good at both.

OK, last question and back to Palm Springs. How did you land Mayor Geoff Kors for the Q&A?

He was a city council aid in San Francisco. He knew my mom when she was first elected to Congress [1987]. They’ve been allies ever since. I got to know him about 1990; I have a picture of us at that time. He’s great — wonderful to see him come down and have such success, and for the city to have such remarkable representation. There is going to be an interesting energy on the stage!

Do you have someone you want to recommend for a short online story or Q&A? Contact james.powers@palmspringslife.com.