The desert doesn’t conjure up Christmas generally, but it actually figures prominently in the creation and recording of some of the most treasured and classic Christmas songs of all time.

There are several stories about the genesis of “White Christmas,” surely the most famous Christmas tune of all. One tale tells of Irving Berlin writing it poolside at the La Quinta Inn. (Another version of the story puts him poolside at the Arizona Biltmore — either way, in the desert.) After finishing the song, he quickly called his secretary in New York exclaiming, “Grab your pen and take down this song. I just wrote the best song I’ve ever written. Heck, I just wrote the best song that anybody’s ever written!”

The version recorded by desert denizen Bing Crosby was the best-selling single in history for decades. Regardless of the specific desert locale, most believe the song was written in December of 1937 for a Broadway show that was never produced. Berlin pulled it out of “the trunk” of song ideas he carried around for the 1942 Paramount Pictures musical film, Holiday Inn. The beginning of the first verse was dropped but it certainly seems to be describing the desert,

The sun is shining, the grass is green,
The orange and palm trees sway

The song was first introduced on radio by Crosby during the Kraft Music Hall broadcast on December 24, 1941, barely two weeks after the bombing of Pearl Harbor. The following year with the release of the movie, “White Christmas” became a favorite among the troops and was well on its way to becoming one of the best known songs of all time.

During the war, Crosby sometimes broadcast his radio show from Palm Springs, usually from the American Legion Post. Bing covered all the great Christmas tunes from “Silver Bells” to “Silent Night” while gracing most of the golf courses around the Coachella Valley and developing Blue Skies Village in Rancho Mirage, a naming nod to another one of his many hits. 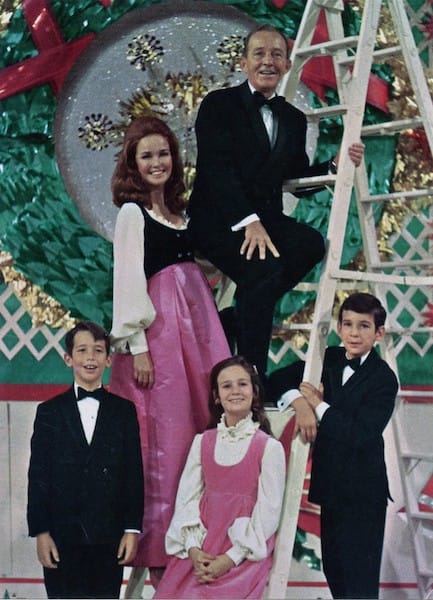 Bing Crosby, his wife Kathyrn, and their children from a holiday TV special.

Sinatra also recorded “Have Yourself a Merry Little Christmas” but modified the lyrics slights. His version is more famous than the original recorded for the movie, Meet Me in St. Louis, by Judy Garland, also a frequent visitor to the valley. Sinatra had songwriter Hugh Martin change the dreary line, “until then, we’ll have to muddle through somehow” to the more hopeful “hang a shining star upon the highest bough.”

The mammoth success of “White Christmas” with its tinge of melancholy and longing for home, prompted the creation of other Christmas songs with a similar sentiment.

Writing in the “blistering hot summer”, multitalented musician Mel Torme penned what is commonly called “Chestnuts Roasting on a Open Fire” but was formally titled “The Christmas Song” in an effort “to stay cool by thinking cool.” Nat King Cole, who owned a home in what is now Vista Las Palmas and played at the Chi Chi in Palm Springs, recorded the most famous version first in 1946 and then many times thereafter. The Cole version was a massive hit and is considered the definitive version, despite Torme having recorded it almost as many times.

Written by Steve Allen in 1953, “Cool Yule” is definitively the swinging-est Christmas tune ever, and was recorded by Louis Armstrong, who did his stints at the Chi Chi as well. “Baby, It’s Cold Outside”, written by Frank Loesser and recorded by various desert rats including Dinah Shore, Johnny Mercer, Barry Manilow and Esther Williams, is definitely the hottest and hippest Christmas tune. That is if you don’t count desert-regular Eartha Kitt’s “Santa Baby.” 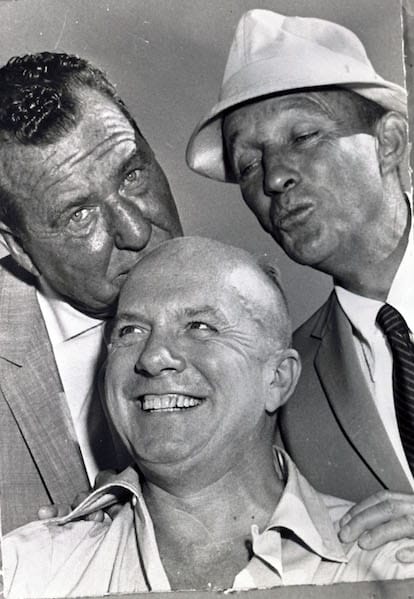 Children’s favorite “Here Comes Santa Claus” has an unlikely author in cowboy movie star Gene Autry, who had a major presence in the desert. The success of the tune inundated Autry with requests to record other Christmas Songs. His subsequent recording of “Rudolph the Red-Nosed Reindeer” made the song into the classic we know today.

• READ NEXT: The Making of La Plaza in Downtown Palm Springs.