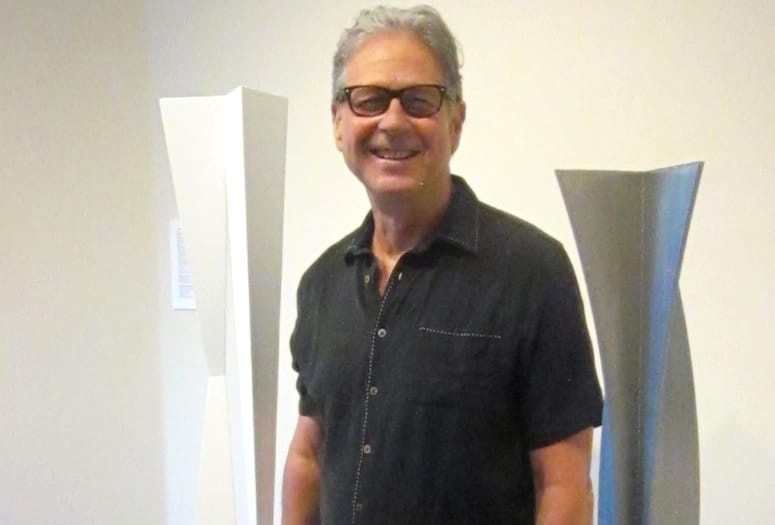 His father designed buildings for Romania’s King Michael, fled from Ceausescu in 1947 as a stowaway on a ship, and later became known for his Bauhaus-style modern buildings like the Chi Chi Club in Palm Springs.

But Christopher Georgesco has never felt like he was standing in a long shadow. Instead of grey, there was much light.

“My father always encouraged me to do my own thing,” says Christopher, whose sculptures are featured at Brian Marki Gallery, which recently marked its first anniversary in Palm Springs. “He gave me a VW van with a mattress in the back, a credit card to Michael’s, a lumber yard, and let me have my freedom.” This wasn’t neglectful parenting, but a tricky custody issue with Georgescu’s ex-wife. At age 16, Christopher was driving around Venice Beach one night when he saw a light coming from a crack in a warehouse.

“Inside, there was a middle-aged guy with a samurai ponytail working on a plexiglass and light sculpture,” Georgeso recalls. “He told me that he was a working artist who owned the building and sublet studios to pay for it.”

So Georgesco took that idea and bought a warehouse building of his own. There, he had room to create large sculptures and the freedom to work as he pleased.

“My father didn’t have much freedom,” Georgesco says. “He would create these wonderful modern homes and then people would fill them with chandeliers and chunky furniture.”

At age 20, Georgesco had his first show out of his warehouse gallery to critical acclaim, followed by a group show at the Newspace Gallery where he has continued to show for the past four decades. At 26, Georgesco was part of a “new talent” art show at the Los Angeles County Museum of Art, which he considers his greatest achievement. His sculptures sold, and he was later penned by the Los Angeles Times critic as, “One of the most interesting sculptors in LA.”

He was featured in a book entitled, LA Rising:SoCal Artists Before 1980, in which the critic says, “All his sculptures are all deceptively simple, monolithic shafts…prolonged looking reveals continually changing forms.”

“I loved it, I was living the high life, and meeting all kinds of people and going places,” Georgesco recalls.

Georgesco’s sleek modern sculptures may have resembled his father’s Bauhaus buildings, but their clean lines show complexity and depth that should not be passed over quickly.

Then the art market changed from Modernism to Expressionism, and Georgesco went from success to poverty. To further complicate things, his father was murdered outside of his studio in 1997, in a case that is still unsolved. Georgesco believes his father was collecting money for past work.

After that, Georgesco says he became paranoid about getting murdered himself, and then met a billionaire with a cosmetics line who later became his girlfriend. So for five years, he worked as an art director for her company creating ads.

“It was a great escape for awhile, but then I had to get back to my studio,” says Georgesco, who later met his wife, Maria Verstappen. The couple decided to look for homes outside of LA. They were considering San Diego, when they happened upon a great house in Desert Hot Springs.

“I told the realtor that I was an artist and needed a place where I could make noise and not bother the neighbors,” he says.

After 20 years they are still there. Georgesco is making plans to build a studio on the lot to continue his work.

“I never expected to be living in Palm Springs, but we love it here,” he says. “We’re out in the country with the coyotes and rabbits, and within 12 minutes we’re in the city.”