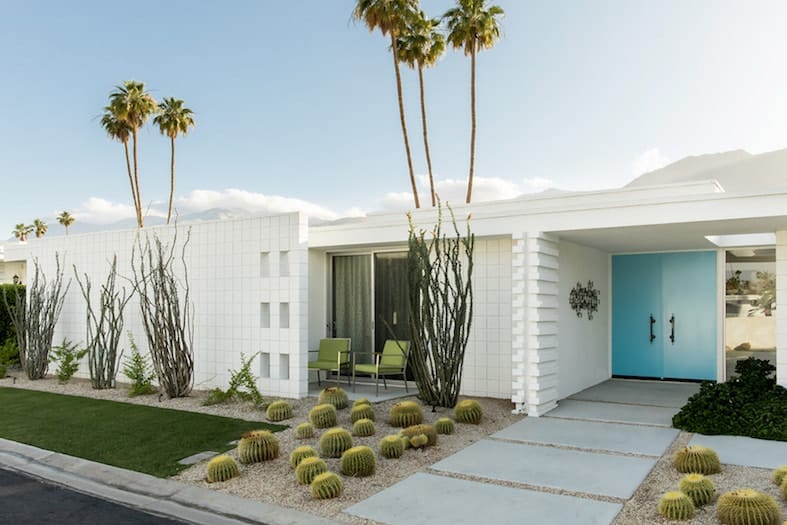 Interior designer Christopher Kennedy is no stranger to unusual client requests. After all, this frequently-published Palm Springs designer, creator of the Modernism Week Show House, shopkeeper, and philanthropist has been practicing design in the desert for nearly two decades and started his career with the firm carrying on Steve Chase’s legacy.

When Palm Springs Life learned that he had recently completed a project with one of his most unusual client design directives to date, we were eager to learn more. We asked Kennedy, the author of two design books, to tell us about the project in his own words.

CK: Picture it. Me, on the phone, with our potential Chicago-based client. Since he was introduced through a past client, I already knew that he was a partner at venerable McKinsey & Co, a firm that I studied in MBA school. So, I am already a bit nervous, to be honest.

Potential client quickly (in eloquent Scottish accent, imagine Sean Connery) launches into how he doesn't want anything glossy or expected. He tells me that he desires a James Bond Villains lair meets a 1960s vision of the future. He asks, “Can we incorporate a modern LED moving light art installation, like I saw at a gallery show recently in NYC?” (Picture me: Sweating, saying maybe?)

Then he asks, rhetorically I am hoping, "What kind of interior would Gene Kranz have come home to after a long day?" (Me: phone in one hand, Googling Gene Kranz with the other...) Sure, my stepdad was literally a NASA rocket scientist. But I’m just a hard-working interior designer — cut me some slack, ok? And Google Gene Kranz if you need to. 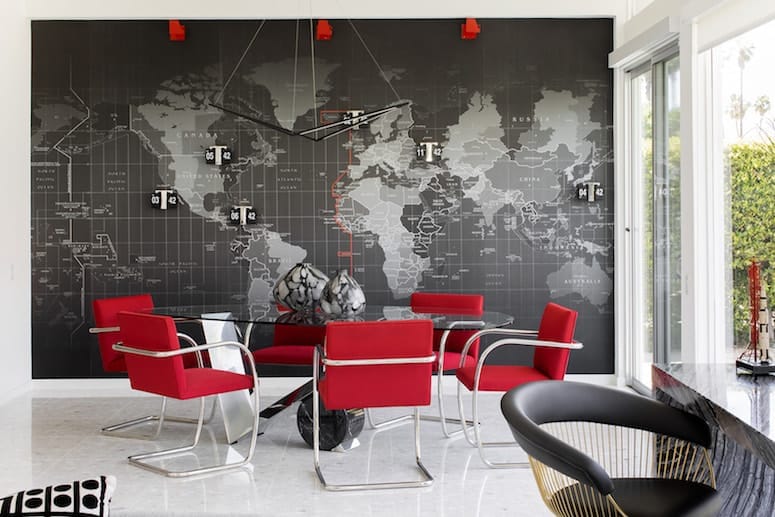 CK: How did I bring my client's request for a Villain's Lair-meets-a-1960s-vision-of-the-future-to-life? By studying the iconic film sets of Dr. Strangelove, of course! To create a dining room that feels a bit like Mission Control and pays homage to that incredible film, a mural map of the earth features analog clocks that show the local time in places meaningful to our clients. Scotland, where one of them hails from. Chicago, where they live now. Southern California, of course, where their vacation home is. And locations popular with Bond villains: Russia and the Bahamas. 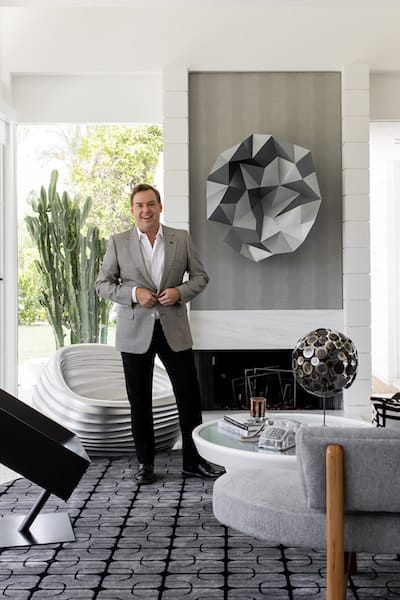 CK: Perhaps one of my favorite rooms of my career, so far. At our project in historic Kings Point, a Vladimir Kagan inspired sofa mixes with a sculptural foam chair, vintage coffee table, and sculpture by Sassoon Kosian over the fireplace. The chair might not look like very comfortable at first glance, but our spry client tells us it is his favorite seat in the house! He sits in it, cross-legged, to read or work on his laptop. I love the William Krisel architecture, with the solid fireplace "floating" between two floor-to-ceiling panes of glass. Does it get much better? Oh wait — maybe it does — you can tour this during Modernism Week 2022, as part of the Kings Point neighborhood tour. Tickets go on sale Nov. 1. 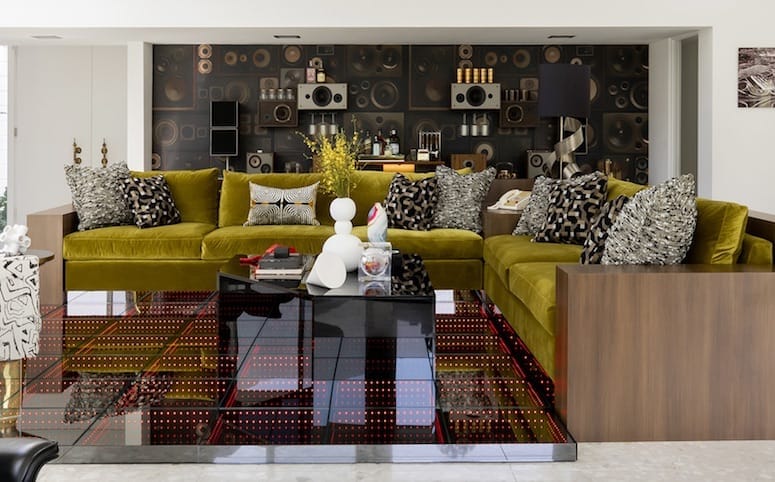 CK: Our client requested a "James Bond Villains Lair" vibe — but also asked if we could make the house work for his husband’s upcoming milestone birthday, as he had a party in the works. He also asked: what can we do where there was once a sunken living room? The sunken living room had been filled in by former owners — and bringing it back was not an option. So, instead, we delineated the space by going "up" and installed an LED dance floor as a slightly raised platform, where the sunken living room 'conversation pit' used to be. But this is no Saturday Night Fever dance floor! And not your normal area rug, either. We used 1970s “Infinity Mirror artwork” technology to create a floor that looks as if Dr. Evil might plunge you to do your doom at any moment. But this floor does, much, much more. Movie night for two, casual cocktail party, or move-out-the-furniture birthday bash...this historic home in Kings Point is ready! 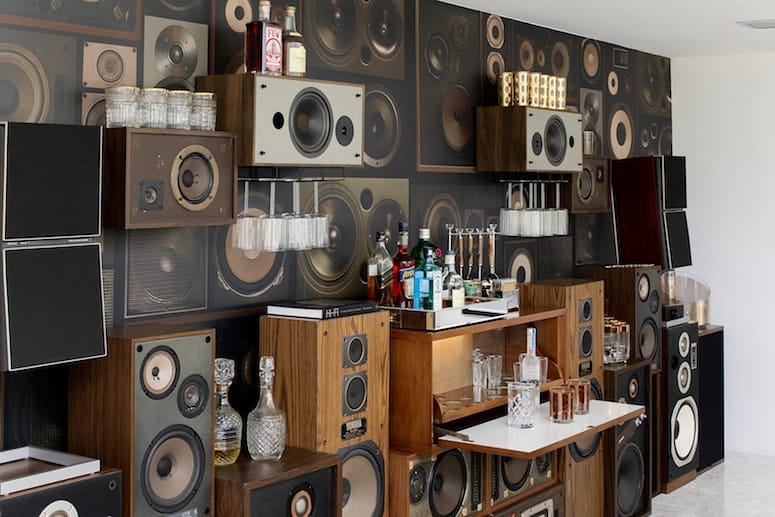 CK: In addition to the already heady villains-lair-meets-vintage-vision-for-the-future design brief, my audiophile client requested a “wall of sound.” I had no idea what that was, and to be honest, and I sorta still don't.

But, I realized that there was a rather neglected and non-purposeful hallway adjacent to the living room -- and that this 1960s vacation house in Palm Springs had no formal bar! What's a guy to do? I seized the opportunity and created a “wall of sound” featuring a trompe-l'oeil mural onto which we assembled a mix of vintage and usable speakers, some of which just happen to hold glassware and spirits. He may call this area the wall of sound…but I call it the “sound bar.” 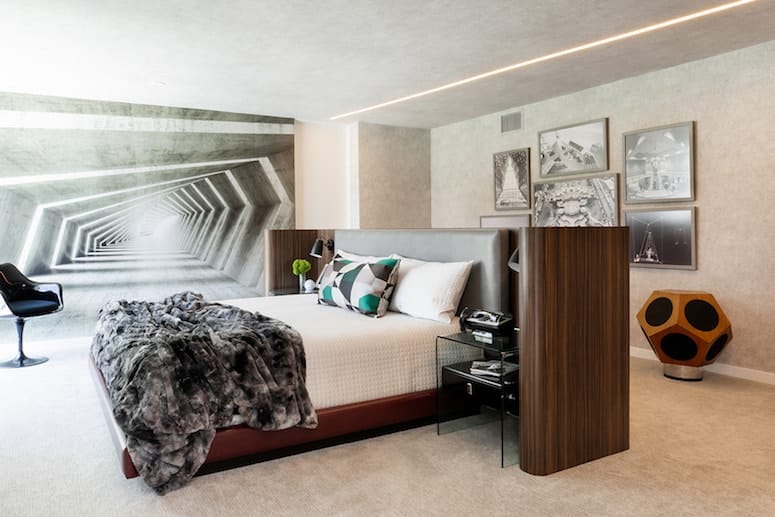 CK: In the primary bedroom, I floated the bed in the middle of the room to take advantage of the mountain views, and created a custom bed surround with all the necessary lighting and electronic controls that a mastermind could want. The overall vibe is “luxury bunker” – with a linen wallcovering printed to look like concrete applied to the walls and ceiling, and a mural that goes on for miles. Vintage speakers and custom LED lighting complete the back-to-the-future look. The photographs on the wall depict monumental architectural works by renowned Brutalist architect Walter Netsch, whose credits include the Air Force Academy Chapel in Colorado Springs…and our clients’ main residence in Chicago. 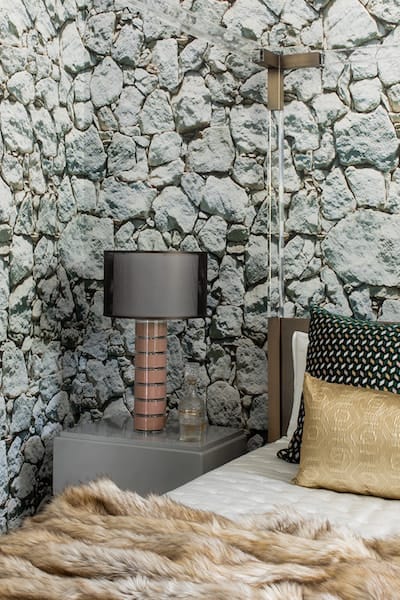 CK: The main guest bedroom is affectionately dubbed “The Bond Girl Suite.” The color scheme pays homage to the first Bond girl ever, Ms. Galore herself, portrayed on screen by Honor Blackman. Galore was generally dressed in a black suit with a gold vest, and this color scheme pays tribute to that look. I added in some pink for a feminine touch. The nightstands and bedside lamps are vintage. The acrylic lamps feature metal shades with perforated metal; feminine, but with the hard edge edge that would be demanded of a Bond Girl. We added yet another trompe l’oeuil wallpaper…this one of a rock wall. The rock wall photograph was taken at a midcentury home in the same neighborhood as Kings Point, Indian Canyons. 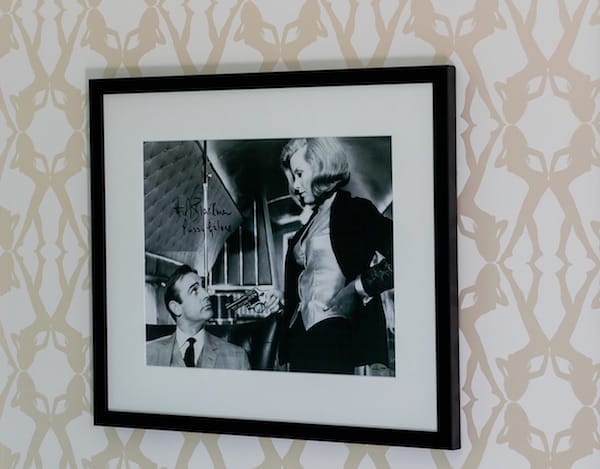 CK: The guest room’s ensuite bath features a signed photograph of gorgeous Honor Blackman, sporting her black suit and gold vest, with dashing Sean Connery in her clutches. The bathroom’s wallpaper pays tribute to the animated opening credits of many 007 films. 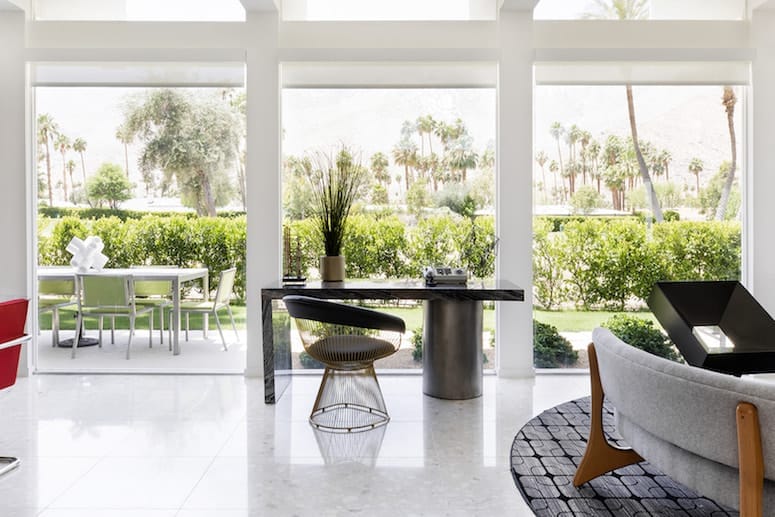 CK: When the walls disappear. Thank you, William Krisel architect. You made my job easy. One of our clients spent several months with this as their home office. Not a bad place to plan your world domination, right? 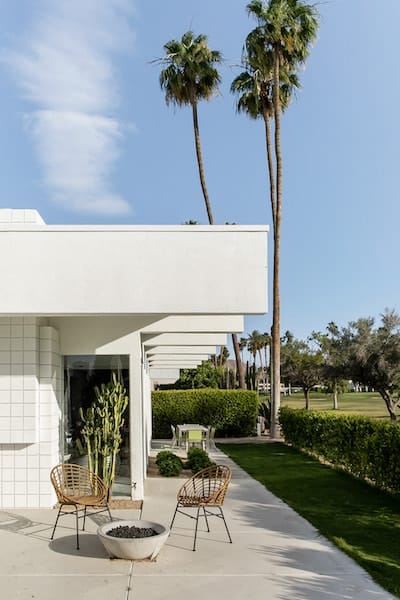 CK: Does it get much better than this William Krisel roofline? I studied architecture in college, spent a summer in Europe studying the Bauhaus and modern masters, and continue to swoon over the properties that I have the privilege to work on. I continually remind myself to be a thoughtful steward of this incredible legacy. 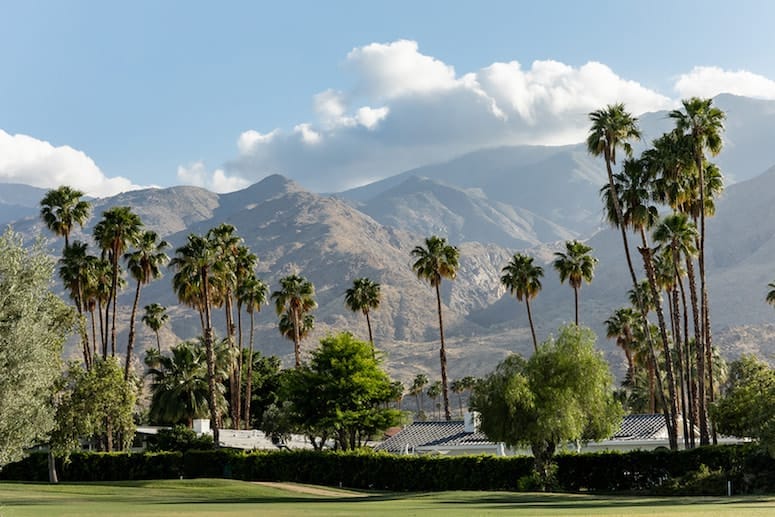 In closing: the view from this incredible property. What more can I say? I pinch myself every morning that I wake up and look at this view. I think we all feel the palpable power of these mountains and this place. Palm Springs, this place, has attracted interesting, creative, and connected people to this region for well over a century. Such people will be play a key role in its bright future, and I am continually honored to play a small part in its design legacy.
PHOTO GALLERY: More "Infinity Mirror artwork" technology from the living room.
• READ NEXT: SkyFall House Palm Springs Offers a Distinctive Curved Courtyard.