Christopher Lloyd partners up with William Shatner in the film, Senior Moment, which was filmed in Palm Springs and screening at Camelot Theatres.
PHOTOGRAPHS COURTESY SENIOR MOMENT MOVIE

Actor Christopher Lloyd will participate in a Q&A at Camelot Theaters on May 1 following the 5:15 p.m. screening of Senior Moment, which was shot in Palm Springs. He spent a few minutes with Palm Springs Life to talk about his long career, including its start with a role in One Flew Over the Cuckoo’s Nest (1975) and the present-day importance of supporting movie theaters as we come out of the pandemic.

You’ve had a long career and it seems you’re busier than ever. Tell us about your two most recent roles, Sal Spinelli, in Senior Moment, and David Mansell, in Nobody. Nobody, costarring Bob Odenkirk, has also been getting some buzz.

Yeah, it keeps rolling along — I love it. I’m essentially a character actor and I think people would agree with me on that. I love characters, and I love that the two movies are coming out at the same time. They’re very contrasting characters, and hopefully I made them convincing. 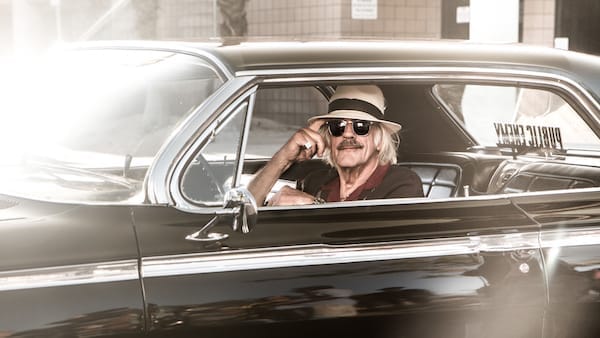 How did the Q&A at Camelot this weekend come about?

When we came out to visit this time we weren’t aware of either the theater or that Senior Moment was going to be showing. So we lucked out, and our stars crossed. I’m delighted to bring attention to the theater, that it’s open, and that people can get from in front of the TV and see a real movie for a change. It’s been awhile. And, of course, to help promote the film.

So you were coming out anyway to enjoy the place? Did working on Senior Moment spark an interest in Palm Springs and surroundings?

I had a friend with a house here, years ago, and I remember visiting a couple of times. [Since shooting Senior Moment] my wife and I have come back a couple of times to spend time and relax, soak up the sun and the desert, and all the wonderful shopping. All the calories. It’s delicious.

Do you have any anecdotes from your time here shooting Senior Moment?

I know we went to a restaurant where Frank Sinatra was supposed to have spent a lot of time. The waiters filled us in with details, like where he sat. I think my wife and I were in the booth where he sat. A lot of history of those times.

You’re known for many different roles, like Jim Ignatowski on Taxi, and Doc Brown, in the Back to the Future trilogy. Do you have a favorite role? Most challenging?
Even if it’s just a little cameo, they’re all on the same level. Whatever job I’m doing in the moment — I get very involved and excited about it. That’s where my world exists. I say if one film stands out, among the many that are significant, it’s One Flew Over the Cuckoo’s Nest. It was my first film, and a wonderful film, cast, and script. It was a great way to launch a film career. I’m fortunate that’s the film that started it all. 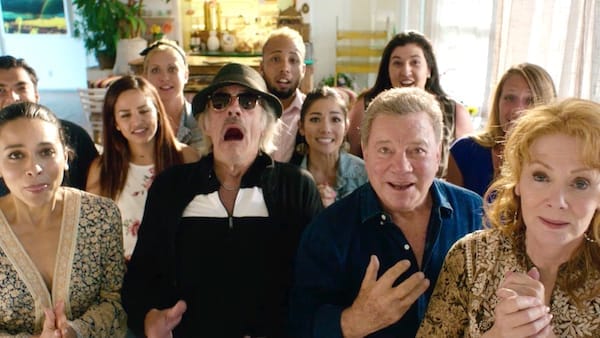 Christopher Lloyd in a scene from Senior Moment with William Shatner and Jean Smart.

Michael was great. He was there every day taking care of things. Saul Zaentz was co-producer, and wonderful to work with too. Jack Nicholson was an idol of mine before I ever thought of doing a film. To be on the same stage with him? It was a huge treat. And Danny DeVito, Brad Dourif, all the others. It was outstanding. I felt very privileged to be there.

You worked with Danny Devito again on Taxi. Was that a Cuckoo’s Nest connection?

Danny was on Taxi first. I came onto the show about a year and half after it started. Whether he had anything to do with my joining Taxi, I’ve never asked him, and he’s never let on. Maybe I owe him a thank you.

Okay, last question. What can people expect for the event at the Camelot on Saturday?

I know William Shatner has a lot of fans, and the advertisements stress it as a romantic comedy for the senior set [so probably some questions about that.] I hope everybody comes out. I know they won’t be disappointed. Be a part of getting a real live movie theater running again after a long recess — it’s a good community thing.

• READ NEXT: Former Rugby Star Todd Clever Gives Back to the Coachella Valley.