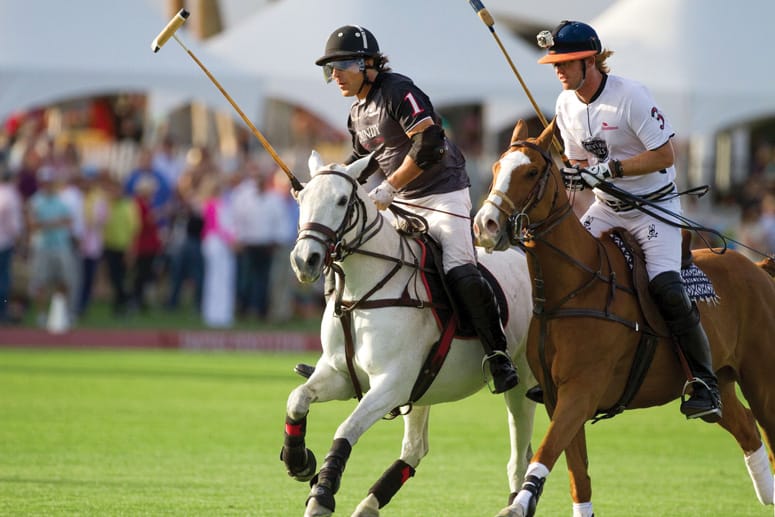 Brian Gay couldn't have hoped for a better start to 2013 than winning the Humana Challenge.
Empire Polo Club

Dust off your finery and best divot-stompers, and watch the ponies fly during the Coachella Valley’s polo season, opening Jan. 5 and running through March 30.

Known as the “game of kings” for its origins as a training practice for nobility and royal cavalries, polo mingles elegant tradition with casual modern sophistication. Here in the Coachella Valley, the sport is playful, social, and welcoming to all. Powerful polo ponies, finely outfitted athletes from around the world, beautiful green fields, and stunning views of the San Jacinto Mountains set the scene for the perfect polo date.

Two Indio venues — Eldorado Polo Club and Empire Polo Club — offer weekend spectator matches, with Sunday polo as the traditional day. Games are played at noon and 2 p.m., and are open to the public. Fans can pack a picnic, pull their cars right up to the field, and casually socialize during the game. Newcomers may be surprised to find tailgaters relaxing field-side, but the popular ritual is part of polo culture for players and enthusiasts alike.

First-time attendees will appreciate play-by-play commentary to guide them through the art of polo — an intricate dance involving equine and human athletic partners jockeying for control of a little white ball, using teamwork to score goals and secure a match. The fast-paced sport is tinged with a hint of danger, making “hockey on horseback” all the more thrilling.

Those wishing to embrace the more posh pageantry of polo might choose to dress up to celebrate the ceremony in high style; for a special treat, view the excitement from a terrace clubhouse or under the white-tented VIP area.

Whether sharing appetizers field-side or dining alfresco at one of the restaurants, spectators are invited to join in the time-honored tradition of the divot stomp. The audience takes to the field, Pretty Woman–style, at halftime to replace the divots kicked up by the horses’ hooves during play, securing the grass clumps for the safety of the players and ponies. Guests are often offered a complimentary glass of Champagne on their way to the field. Both Eldorado Polo Club and Empire Polo Club also boast magnificent properties with stables, polo schools, exercise tracks, restaurant/bars, and food and beverage concessions.

Eldorado Polo Club offers spectator matches from Jan. 5 to March 30 at noon Saturdays and 10 a.m. Sundays at the Cantina restaurant; and at noon and 2 p.m. Sundays at Field 1. Tailgating is free and the public is welcome. 50950 Madison St., Indio. 760-831-7656; www.eldoradopoloclub.com