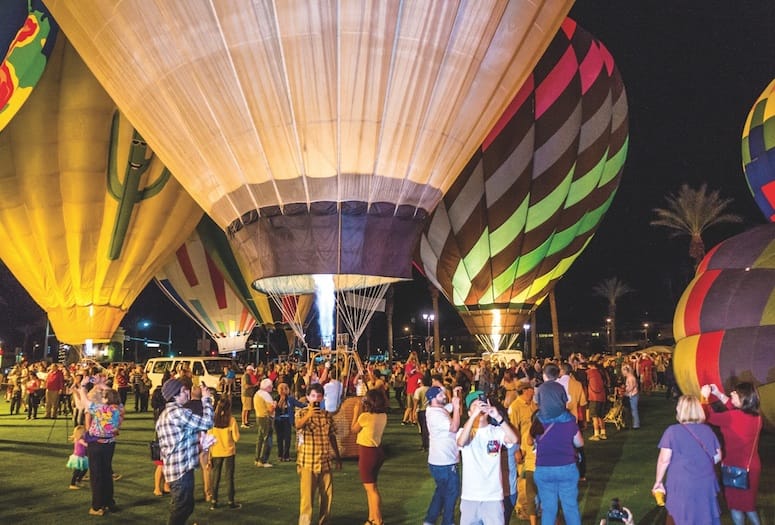 The 2016 Cathedral City Hot Air Balloon Festival takes place on February 13th and 14th at the Festival Lawn in downtown.
Photo courtesy of the City of Cathedral City

Cathedral City is relatively young as an incorporated city but is steeped in history, especially when it comes to the arts.

The Cove area developed a reputation early on as an artists’ colony and to this day, painters, photographers, sculptors and writers gravitate to the enclave that was, and continues to be, a source of inspiration. Renowned modernist painter Agnes Pelton built a permanent residence in the Cove in 1932, and more than 50 years after her death, the Agnes Pelton Society dedicated to her memory thrives and gives rise to many arts-related activities in the city.

The annual Tour of Artists and Historic Homes is a prime example, along with a Cove Mural Project that began this spring at the east end of San Jacinto Road. The flourishing gallery scene further underscores Cathedral City’s reputation as a community “Where Art Lives!” “We’ve been working hard to revive the Verano residential development — a victim of the economic downturn,” says Craig Loe, Coachella Valley division president of Inland Communities Corp. “With keen interest, support, and substantial effort by city staff, we are now able to continue building homes and amenities that will make up this distinctive 1,362-unit master planned community.” A new community park at the corner of Ocotillo and Moreno roads will enhance Cathedral City’s Whitewater neighborhood when the park opens this fall. The 5-acre, $5 million park counts softball and soccer fields, two children’s play areas and a skateboard area among its many features. It joins a healthy collection of eight other community parks that lie within the city’s boundaries. “We are proud of the many investments that are being made in our vibrant and growing community. The seeds that are planted today will continue to benefit future generations,” says Mayor Stan Henry.

The number of visitors attracted to Cathedral City and its charms is only set to increase in light of two new hotel projects and one major hotel renovation. Construction is underway on a 200-room Staybridge Suites Hotel near the Cimarron Golf Resort. Handsomely appointed studio, one-bedroom and two-bedroom suites will cater to extended-stay travelers who may be inclined to linger even longer once the hotel’s panoramic mountain views capture their imagination. Slightly farther north, the Desert Princess Golf Resort is wrapping up a major renovation and rebranding, while yet another luxury hotel near downtown is in the early stages of review at City Hall. photo courtesy of the city of cathedral city

There’s little doubt both residents and visitors delight in Cathedral City’s wide-ranging shopping, dining, and recreation opportunities. Discerning shoppers can find the vehicle of their dreams at the bustling Cathedral City Auto Center, home to 11 dealers featuring over 20 luxury and competitive brands, including the all-electric Tesla Motors. If domesticity is a focus, people can head over to the Perez Road Business District and browse the city’s many distinctive home improvement, design, and decor shops, as well as a growing number of art galleries. Fashionistas on a budget are constantly thrilled by the range of resale shops dotting the landscape of Cathedral City’s “Cent$ationalMile” on East Palm Canyon Drive between Revivals and Celebrity Consignments.

When hunger strikes, there’s something to please every palate at one of numerous restaurants around the city and in the downtown core, such as the new Bontá Restaurant & Bar. There’s no shortage of entertainment venues either — whether it’s a film at the Mary Pickford Theatre or Desert Cinemas, national collegiate softball at Big League Dreams Sport Park, or miniature golf and go-karts at Boomers Family Entertainment Center.

“This low-crime, year-round community of nearly 53,000 residents with a median age of just over 36 years makes it prime for businesses targeted at young and growing families with median incomes comparable to neighboring cities,” says Nachhattar Chandi, President/CEO, Chandi Group USA.

The fun really ramps up during any one of Cathedral City’s original festivals. The Cathedral City Spooktacular on Perez Road gets the ball rolling. This Halloween event features trick-or-treating for kids, a costume contest, police and fire exhibitions, music, and more.

Come November, the Taste of Jalisco event entices residents and visitors to celebrate the relationship between Cathedral City and its sister city, Tequila, Jalisco (Mexico), through music, fashion, spirits, culture, and cuisine. A parade, mariachi band, and Quinceañera fashion show number among the attractions and activities.

The inaugural Cathedral City Hot Air Balloon Festival really “took off” last year and is set to return this year, bigger and better than ever. It happens during Valentine’s weekend, perfectly encapsulating the “Love is in the Air” theme. Highlights of what has quickly become a Cathedral City signature event include an actual balloon race setting forth across the valley, couples’ willingness to wed or become engaged in a tethered hot-air balloon 100 feet in the air, and two nights of the popular Balloon Glow timed to music.
Another tradition that has quickly taken hold is Cathedral City LGBT Days.

This diversity-celebrating event is gearing up for a triumphant second run during Easter weekend 2016. Colorful and wide-ranging activities include a screening of the Rocky Horror Picture Show, a Costume Charity Bed Race, West Coast Artists Art Festival, and a showcase of local entertainers and DJs, to name just a few.

Past to present, Cathedral City has much to celebrate, and all indications are this trend will continue well into the future.