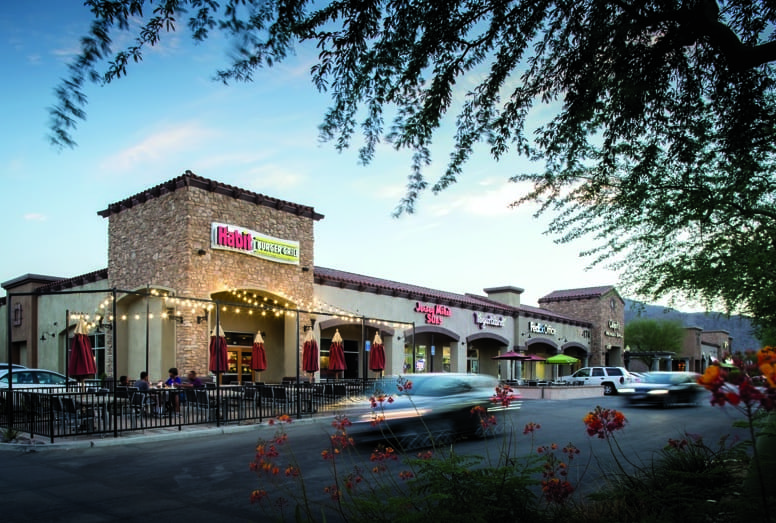 With a brand-new state-of-the-art wellness center and a number of exciting economic development projects recently completed and on the rise, it’s easy to see that all is well in the City of La Quinta.

Wellness is an overall theme embraced throughout the community — boasting a vibrant and healthy city nestled at the base of the magnificent Santa Rosa Mountains. Prudent planning has brought in a number of new businesses in the last year, further diversifying the many shopping and dining options available to full- and part-residents along with the many visitors who frequent La Quinta each year.

The city was buzzing with delight when the mega-superstore Hobby Lobby opened in January. Its 55,000 square feet of arts and crafts supplies have attracted hobbyists throughout the region. This was the national retailer’s first expansion in the Coachella Valley.

An  array of new dining venues have staked claim in La Quinta, including California Ocean Grill, Dickey’s Barbecue Pit, Habit Burger Grill, Jersey Mike’s, La Rue Wine Bar, Waba Grill, and Yogurtland. The highly anticipated In-N-Out Burger will open by the end of 2015.
In addition to restaurants, La Quinta has added other new businesses this past year, including Phenix Salon Suites and Jule’s Market, which has been a welcome addition for the residents of the La Quinta Cove. Coming soon will be Aldi market, providing grocery services next to future In-N-Out Burger on the Highway 111 corridor. Perhaps one of the most anxiously awaited new developments in La Quinta is the Cinemark Century Theatre, slated to open in November. It will bring a new element of entertainment to the community with a 42,000-square-foot, 12-screen movie theater. The company has announced the new theater will feature XD technology, and there will be a lobby bar with beer, wine, and frozen cocktails.

The Wellness Center — a significant expansion of the city’s former senior center — has been a resounding hit in the community. Since opening in January, it has experienced a surge of new members who enjoy the state-of-the-art exercise equipment; a hospitality area in the lobby; new restrooms with a shower and lockers for men and women; larger classrooms with expanded programs such as fitness, youth karate, and dance; an artificial-turf putting green and chipping area; and a community gardening area.

Adjacent to the Wellness Center on the Civic Center Campus, the La Quinta Public Library is celebrating 10 years of service. As one of the busiest libraries in the Riverside County Library system, the La Quinta library offers everything from story time hours and computer classes to movies and book clubs.

La Quinta is also known for some signature events that draw the national spotlight and thousands of attendees. The Career Builder Challenge, in partnership with the Clinton Foundation, once again brings the PGA Tour to the desert. La Quinta is the proud host of this renowned golf tournament, played on the TPC Stadium Course; its PGA West sister course, the Jack Nicklaus Tournament Course; and the La Quinta Country Club, the tournament’s longtime mainstay course. Formerly the Bob Hope Classic and Humana Challenge, this is the event’s first tournament with CareerBuilder as title sponsor, to be held during the week of Jan. 18, 2016, with official rounds scheduled for Thursday the 21st through Sunday the 24th. The La Quinta Arts Foundation presents Art Under the Umbrellas.

Ranked the No. 1 Fine Art Festival in the U.S. for the past three consecutive years, the La Quinta Arts Festival is held on the spectacular grounds of the La Quinta Civic Center Campus March 3–-6, 2016. La Quinta Civic Center Campus is a life-size picture postcard framed by majestic mountains, lush green lawns, fountains and lakes — a magnificent outdoor gallery extolled by Art Fair SourceBook as “the most stunning festival site in the country.”

Hosting 220 of the foremost contemporary artists in the nation, this four-day event guarantees its patrons an unparalleled cultural experience, with amenities that include daily music, performance art, and trendy food concessions in upscale Restaurant Row, plus craft beers and fine wines.

In addition to the festival, the La Quinta Arts Foundation also presents Art Under the Umbrellas, a diverse collection of 80 artists exhibiting their original creations along Old Town La Quinta’s picturesque Main Street, lined with boutiques and restaurants on eight key Saturdays throughout the season. Upcoming dates are Oct. 31, Nov. 14, and Nov. 28, 2015, as well as Jan. 16, Jan. 23, Feb. 6, Feb. 13, and March 19, 2016.

Other events enjoyed in La Quinta include the La Quinta Historical Society’s upcoming annual Haunted Hacienda on October 24; Date Farm Tour on November 1; Historic La Quinta Resort Tour on December 5; and the La Quinta History of Tennis on Feb. 25, 2016. Watch for Old Town La Quinta Block Parties to be announced, as well as more details on the La Quinta Chamber of Commerce’s top events such as the Taste of La Quinta and the Hot Rod and Custom Car Show. photo courtesy of the Chateau at Lake La Quinta

The Chateau at Lake La Quinta.

La Quinta’s dynamic roster of events enhances its booming tourism market, and the city’s wide-ranging hospitality options offer choices for every preference and budget. Its newest hotel, the Chateau at Lake La Quinta, is one of California’s premier boutique resorts.

The Chateau joins other popular La Quinta lodging venues, including the historic La Quinta Resort & Club, with luxury amenities such as shops, restaurants, and hundreds of casitas meandering through lush grounds nestled along the mountains, as well as the Embassy Suites La Quinta and Homewood Suites La Quinta — both gorgeous properties backed by trusted national hotel brands.

For those who wish to stay and make La Quinta their permanent place residents, new housing developments are under way. Darby Estates offers 19 single-family residential lots; Griffin Ranch is adding 393 single-family homes on approximately 240 acres to be served by an existing a 10,000-square-foot community clubhouse; and the Estates at Griffin Lakes will bring 78 single-family homes to the former Merv Griffin Estate property, incorporating a six-acre lake for storm retention and landscape irrigation purposes.

Traffic improvements currently in the works include a new signal at the busy intersection of Adams Street and Corporate Center Drive by the La Quinta Post Office, as well as the long-awaited new Jefferson Street interchange on Interstate 10, expected to be completed by Spring 2017.

With wellness at the forefront in every aspect of La Quinta’s growth and vitality, it’s no wonder the City of La Quinta continues to shine as the Gem of the Desert.