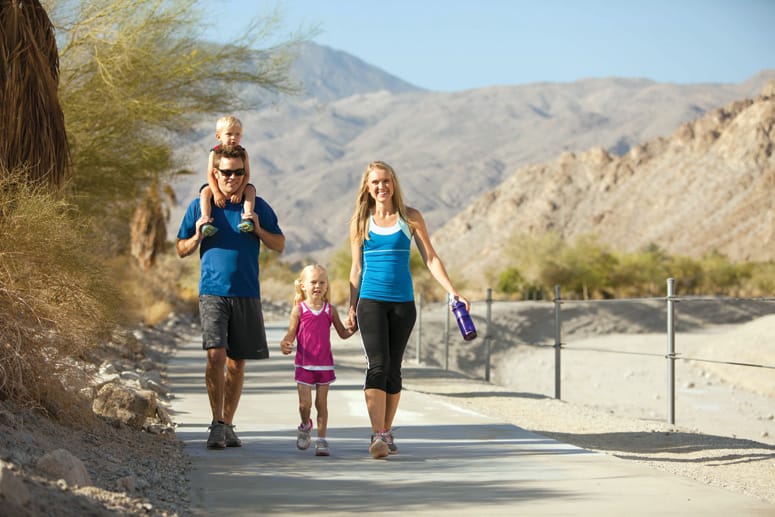 In the past year, the City of La Quinta has experienced a resurgence in economic development activity — demonstrating that the Gem of the Desert remains a prime destination for work, play and quality of life.

La Quinta anticipates new energy in the community as some monumental development projects get underway. Currently, SilverRock Resort consists of a championship 18-hole golf course situated along the breathtaking mountain ridges that border the city to the south. Within the next five years, the City of La Quinta will work to carry out the original Specific Land Use Plan for the remaining property.

An exciting development project slated within the next year is the construction of a new Hobby Lobby, which will bring a 55,400-square-foot hobby superstore to La Quinta. Hobby Lobby is considered a leader in the arts-and-crafts industry with 557 stores nationwide. The La Quinta store is the company’s first location in the Coachella Valley, and is projected to open next summer in the commercial space located west of Kohl’s in the One Eleven La Quinta Center.

New home development gains momentum this year as Griffin Ranch and Andalusia complete their final phases. Those seeking affordable housing will be pleased to see the addition of 176 units in the Coral Mountain Apartments, which should be completed by spring of 2014.

The complex, near the intersection of Dune Palms Road and Highway 111, includes a clubhouse and pool area, a playground and basketball court, and multiple barbecue areas. But what will be particularly impactful for residents are the solar panels, which will provide significant savings on utility bills.

Traffic flow in La Quinta will be enhanced with the welcomed additions of the Adams Street Bridge and a roundabout at the intersection of Eisenhower Drive and Calle Sinaloa. The Adams Street Bridge opened in September, adding four lanes of traffic and creating a more secure passage over the Whitewater Canal.

The roundabout at Eisenhower Drive and Calle Sinaloa, which is currently close to completion, will allow for safer traffic patterns. Road widening at Highway 111 and Washington Street will also help congestion at this busy intersection.

Smoother traffic flows help ease travel throughout this busy resort mecca, which hosts nationally-recognized golf and arts events. In January, La Quinta will once again be the host city for the Humana Challenge a PGA Tour event that also features a celebrity pro-am attracting stars like Carson Daly and Michael Bolton, as well as athletes such as former NFL pro Eric Dickerson. In conjunction with this major golf tournament, the City of La Quinta puts on a number of health-focused events, which are in line with the mission of title sponsor, Humana. These events include a 5k Walk and Family Festival as well as special healthy activities at the La Quinta Certified Farmers Market.

The City of La Quinta has proudly been the home of the La Quinta Arts Festival since the city incorporated in 1982; this year, the festival was ranked the No. 1 arts festival in the country by Art Fair SourceBook. Presented by the La Quinta Arts Foundation, the festival is held at La Quinta’s stunning Civic Center Campus, and features more than 230 artists as well as food, wine, and live entertainment. The foundation hosts other events throughout the year including Art Under the Umbrellas, which lines the picturesque streets of Old Town La Quinta with more than 70 artists.

Food lovers and car enthusiasts will enjoy events organized by the La Quinta Chamber of Commerce, including the Classic & Custom Car Show in January and the Taste of La Quinta, held in February. The Chamber also hosts luncheons and mixers throughout the year to keep locals updated on community happenings and to foster networking opportunities for businesses.

The City of La Quinta will be the starting point for the inaugural Patriot Ride for Our Heroes on Oct. 26, 2013. Participants will have the option to bicycle 5, 10, 25, 50, or 100 miles, and the proceeds will benefit charities related to veterans, active military, and police and fire departments.

With additional La Quinta happenings including the Certified Farmers Market in Old Town La Quinta every Sunday morning through the end of May, nature walks and hikes, and a number of programs at the La Quinta Senior Center, there is always something fun to do in this lively community.

Continuing with the city’s focus on health and wellness, the La Quinta Fitness Center provides the best value around at $50 per year for residents, and low non-resident rates as well. The Center features state-of-the-art fitness equipment and qualified personal training staff, and is open six days a week.

The La Quinta Library offers popular programs and amenities such as family movie days, computer classes, and software that allows readers to download books and check them out on Nooks and Chromebooks. The La Quinta Library has the largest collection of audio books and video games in the desert, including Leapfrog software.

At the La Quinta Museum, last year’s Creativity in the Cove exhibit, featuring artists living in the La Quinta Cove, was so well received, that the museum is preparing to open Creativity in La Quinta, Part 2, expanding the focus to artists throughout La Quinta, and incorporating Open Studio tours. The La Quinta Historical Society will continue with programs like First Fridays and the La Quinta Resort Tour.

All city facilities are upgrading technology. Wi-Fi and LED lighting will be installed at City Hall, the La Quinta Museum, and the La Quinta Library, and the tourism and city websites will be enhanced to be more functional and user-friendly. A new permit center will help developers expedite projects and make the process easier by consolidating all steps into one location within City Hall.

La Quinta High School has just phase one of a 46-million dollar construction project, which brings a Career and Technical Education facility that will house a Public Service Academy, Medical Health Academy and Culinary Arts Program; and a second building that features science labs and classrooms. The second phase, which should be completed by the end of 2014, will add a two-story classroom building and a multi-purpose room.

Embracing healthy living, art and culture, and new opportunities for growth, La Quinta is poised to welcome new development and enhanced amenities for visitors and residents — maintaining its luster as the Gem of the Desert.