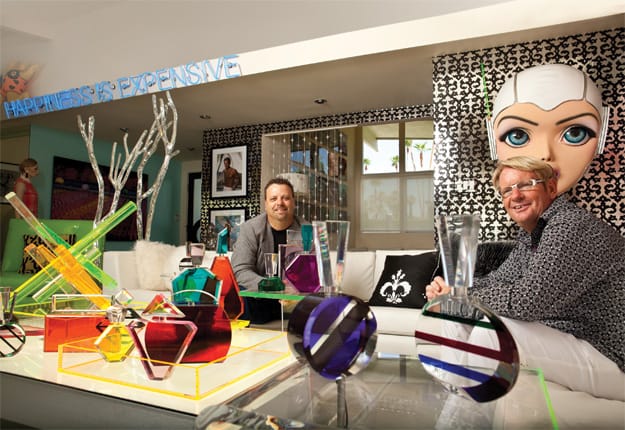 Craig Zeigler’s clients include Jamie Kabler of Palm Springs, whose house is shown here. Interior decorator J. Jones (right) collaborates with Zeigler (left) on some of the designs.
Photos BY: GERRY MACEDA

Not long ago, author Anne Rice commissioned Craig Zeigler to make acrylic mirror-backed doll showcases to line a hall. Over the years, he has installed classy handrails in the Bob Hope house and turned out 30 acrylic trays for a Kirk Douglas gift list.

Celebrity clients also include Barbara Sinatra and the Annenberg estate. Midcentury modern enthusiasts like Jamie Kabler and Shari Applebaum of Palm Springs inspire and collect his work. “Ziggy is a great resource,” says Kabler, who owns at least 20 pieces, including Zeigler’s prototype martini-shaped table. Applebaum says, “My house has been Ziggified.” She recently suggested that a Chanel shape be added to his series of perfume bottle-silhouette sculptures.

Right out of high school, Zeigler answered an ad for “saw man/polisher” at an acrylic fabrication company. Now, 23 years later, he has perfected his craft. In his Cathedral City workshop, he makes anything to order, from an end table to a four-poster bed. Everything is handmade. “I go from sheeting, no molds, he says. “Nothing’s spit out of a machine. It’s like the old days.”

Acrylic furnishings are in revival mode. Economical, they are durable as well as beautiful; and they can even sport a touch of humor. Zeigler excels at adding color through tinted glue. “Sometimes people bring me a swatch to match,” he says. “I dye my own glue. I can make aqua, teal, fuchsia, purple …”

Decorator J. Jones, an artistic collaborator with Zeigler, points out that acrylics aren’t limited to a strictly modern scene. “A Lucite table in a traditional living room is just the spark it needs,” he says.