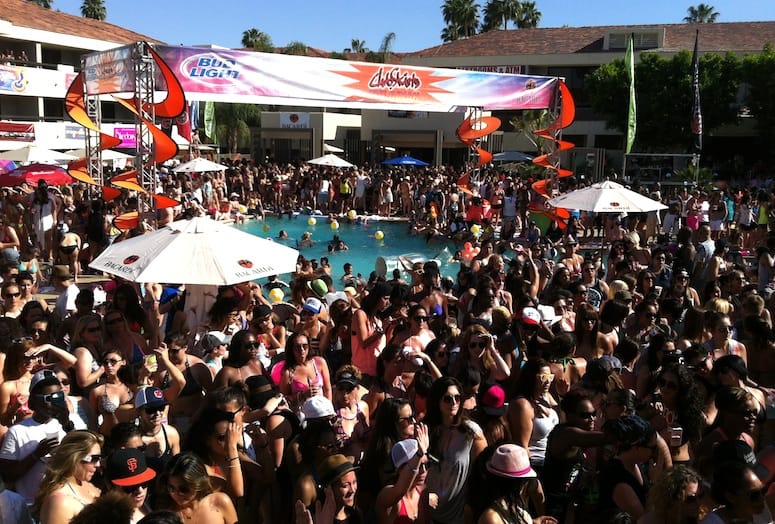 Women of all ages danced shirtless and climbed the rooftop as the Palm Springs museum security guard tried to peel them off the walls.

It was the start of something special, according to “Dinah” creator Mariah Hanson.

The tranquil museum would not host another event like this one, yet Palm Springs would. The year was 1992 and marked the first annual legendary event, “The Dinah”.

Twenty-three years later, “The Dinah” is a five-day celebration that is known as the biggest party for lesbians all over the world. This year’s Club Skirts Dinah Shore weekend is April 2-6 headquartered at the Palm Springs Hilton. The Dinah represents more than just a party; it gives women who still live in a society where they must shield their sexuality a chance to be free and a part of a community, Hanson says (pictured at right).

Hanson has been heavily involved with gay rights and event promotions for many years. Noticing there was a built-in audience during the Dinah Shore Classic golf tournament (now the Kraft Nabisco), Hanson found a “natural segue to finding evening entertainment in Palm Springs” for all the visitors.

Utilizing the ideal weather, hotels, and local nightlife, Hanson has turned her dream into a 22-year annual party that includes VIPs from all walks of life.

“Whether it’s subtle or a profound impact, when women come to the Dinah, it changes their lives in some way,” Hanson says.

Celebrities began joining the festivities early on. Major stars like Ellen DeGeneres showed up at the Club Skirts Friday night White Party in 1993 with a big entourage. That Sunday night, a line wrapped around the corner as hopeful attendees waited to get in and catch a set by Chaz Bono’s band.

By 1994, the population flourished and Hanson added on another evening of events, making it a four-day celebration.

By 2011, because of its growing popularity, it became a five-day event. As “The Dinah” continues to evolve in coming years, Hanson says “instead of expanding days, it will be events. The audience is growing and changing so we will offer more to them.”

Not all stars were welcomed with open arms, as Hanson says she was highly criticized by many in the LGBT community for having Katy Perry join an all-star line up with Lady Gaga and Margaret Cho in 2009. Perry’s “I Kissed a Girl” ruffled many feathers in the lesbian community.

"That story happens more often than not, she’s also very young, so why get upset about a talented performer that had an experience that she wrote about?" says Hanson.

Perry’s song “Fireworks” is now considered a gay anthem and there is a Facebook page asking that Perry to be brought back to The Dinah.

The Dinah Film Series and Celebrity Poker Tournament are two new events this year. Celebrities will donate proceeds from the poker tournament to the Human Rights Campaign. Other events are the infamous pool parties, battle of the DJ’s, and comedy acts.

For tickets and information, visit thedinah.com