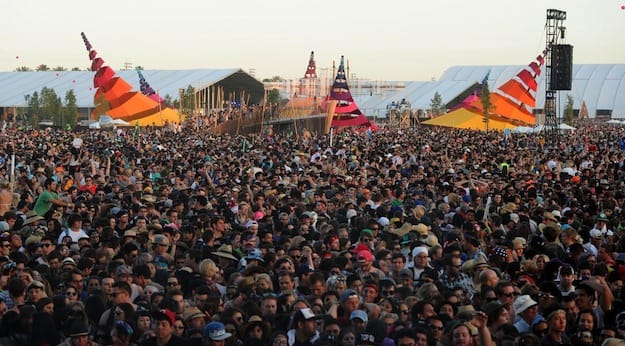 The first weekend of Coachella Music and Arts Festival 2013 was rife with surprises, including an unscheduled appearance by R&B singer R. Kelly.

The “I Believe I Can Fly” singer took the Indio stage to perform with French band Phoenix Saturday evening. Kelly wowed the crowd of onlookers, as he and Thomas Mars (that’s Mr. Sofia Coppola to you and me) performed a mashup, of sorts of "1901" and "Ignition (Remix)".

But R. Kelly wasn’t the only fan favorite to appear at Coachella, April 12-14. Let’s take a look back at some highlights:

As the Empire Polo grounds opened Friday morning, attendees crowded the field to take prime position before each of the Coachella stages. Passion Pit [insert lovelorn sigh here] infused its audience with energy and plenty of feel-good vibes during its set.

Lead singer Michael Angelakos roared through an assortment of the group’s songs from its latest release, Gossamer, as well as its first LP, Manners. Passion Pit will also perform at the inaugural Tachevah: A Palm Springs Block Party, on April 17 at the Spa Resort Casino parking lot.

Another band that made a huge splash Friday was Metric. Crowds gathered to watch singer Emily Hines smolder through hits like “Artificial Nocturne” on the main stage. The UK’s Palma Violets acquired a slew of new fans stateside with its set. Songs “Best of Friends” and “Step Up for the Cool Cats” were fueled with the same raw power of the Clash and the promise of greater things to come from this quartet.

I haven’t had this much fun at a show since I saw the Make-up perform at Bowery Ballroom back in 1998. Yes, Ian, you are still one of my all-time favorites.

DJ Dillon Francis got his Christmas wish eight months early when vocalist Jenny Lewis reunited with her Postal Service band mates for a reunion show. The audience gave Lewis, Ben Gibbard and Jimmy Tamborello a serious run for the money by out-singing the act during its performance of “Such Great Heights.”

Also dazzling the crowd Saturday was Moby. The L.A.-based DJ showed off his best dance moves, as he rocked the evening crowd with live renditions of his greatest hits including “Porcelain”.

The only unforseen dampener for most of the festival’s fans was an impromptu wind storm that raced through the Coachella Valley Sunday afternoon. Many attendees could be seen shielding their faces with T-shirts to avoid being attacked by sand and other debris. Kind of gives all-new meaning to the Association’s lyrics, “Everyone knows it’s Windy…”

Aside from all the musical happenings and borderline natural disasters, there were plenty of other outstanding visuals to take in; here are the best ones: 12-year-old bad girls, 11 paparazzi, 10 Asian hotties, nine Lohan sightings, eight dirty stay-outs, seven celeb DJs, six hipsters yawning, five guys in bling … four hippie chicks, three mosh pits, too many breasts, and a chick puking under a tree. Yeah, I went there…

How will weekend two measure up to the first? Something tells me it’s going to be even more epic.