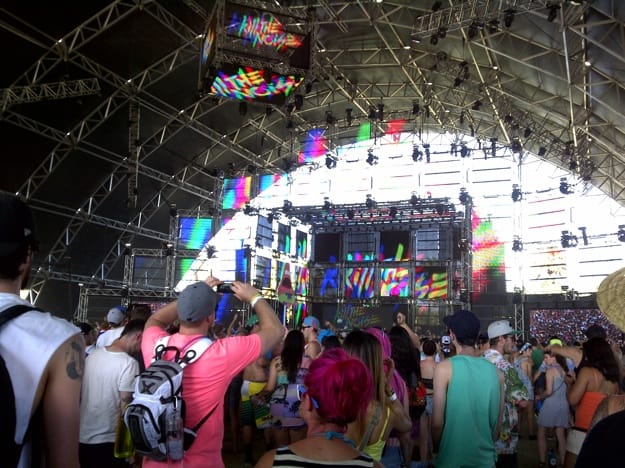 OK, so remember last week when I said I thought the second week of Coachella would be more epic than the first?

Well, it was … compliments of the Red Hot Chili Peppers’ fans. A fight erupted in the audience of the group’s show Sunday (April 21) when a male attendee punched a female attendee.

The altercation occurred just minutes in the Chili Peppers’ set, after fans’ repeated requests for the man cease shoving those around him was ignored. A verbal exchange flared up between his female companion and another audience member. The next thing any of us knew, several of the kids standing around our area were on the ground, brawling – UFC-style.

The band never stopped playing, despite the large commotion that resulted from the melee. Coincidentally, the next song in the Red Hot Chili Peppers’ set was “Scar Tissue”.

Oh, and despite reports about the band’s first-week performance being less than stellar, Anthony Kiedis, Flea, Josh Klinghoffer, and Will Ferrell – I mean, Chad Smith –more than redeemed themselves on tracks like “Suck My Kiss” and “Me & My Friends”.

Other standout performances from Sunday included Denver, Colo. folk-rockers, the Lumineers. The band made the bold decision to try to squeeze in one last song into its set. However, Coachella’s sound techs were not amused and pulled the plug on the Lumineers’ microphones. The band played on, seemingly unaware that the audience could no longer hear its music – much to the joy of the crowd, who applauded the dedication.

Synth-rockers The Faint also enjoyed a welcome reception. Fans crowded into the tent to watch the Omaha, Neb. natives perform songs from its record Danse Macabre.

Saturday (April 20) boasted a number of audacious appearances. Club music producer Kill the Noise brought his evil genius and magnificent light show to dance fanatics. Despite the blazing temperatures, fans rocked out to his distinctive brand of dubstep and house music.

Breakout star and retro diva Janelle Monae wowed the crowd of onlookers, who lined up to catch a glimpse of her dancing and singing. Too bad her lips didn’t always match the music – just sayin’.

The Postal Service’s second weekend performance was even better than the first, although the spectacle of seeing Ben Gibbard and Jenny Lewis duet with each other was somewhat dimmed by the massive amount of internet reporting on their previous effort.

DJ and Party hype man Major Lazer drew one of the largest crowds of Coachella attendees Saturday. Fans were seen dancing in the venue, around the corner, and as far back as the food stands. The performer and his scantily clad back-up dancers took to the stage with collaborator and record label owner, Diplo, for the raucous show.

Oh, and for everyone eagerly anticipating an R. Kelly repeat at the Phoenix gig, sorry, sorry, sorry. That’s probably the only apology you’ll get because the R&B crooner was a no-show Saturday night. Singer Thomas Mars did his best to pacify the audience by crowd surfing and then climbing the rafters during the group’s encore, but many fans were left disappointed. We did have an awesome time watching a freaky-deaky couple make out with each other during the set. I don’t judge, but one of them was clearly wearing beer goggles.

However, one of the more compelling shows belonged to Brooklyn’s Yeah, Yeah, Yeahs. Karen O., you took me to church with that performance of “Sacrilege”, complete with a backing choir. The group’s Friday night (April 19) stage antics nearly eclipsed awaited acts like Blur and the Stone Roses, who gave fans a breezy reintroduction into the world of ‘90s Brit pop.

Odd Future’s Earl Sweatshirt was also on hand Friday to perform. Unfortunately for the young rapper, his buddy Tyler the Creator (who appeared as Earl’s surprise guest) stole a bit of his spotlight. My companions and I even noted that it sounded like they’d turned off Earl’s mic altogether during most of the show. Marcia, Marcia, Marcia!

All-in-all, Coachella 2013’s second weekend was a wild companion piece to the first. It was light on clothes (you’ve never seen so many naked derrieres than at Coachella), heavy on art (Is it just me, or did I totally spend the past two weekends at Burning Man?), and brimming with outstanding music.

However, festival organizers should really up the surprise factor next year. Two weekends and only one special guest? Now, that’s just rude.