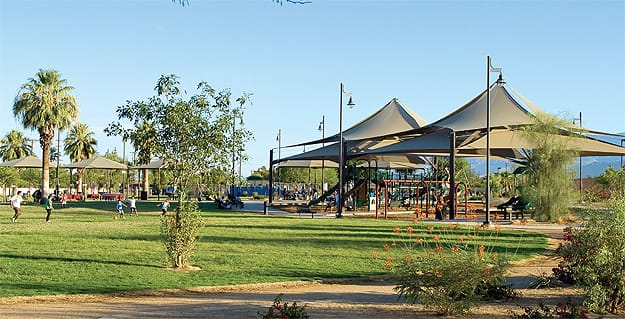 “We continue to set the bar higher,” says Mayor Eduardo Garcia about his city’s outlook for the future. “Coachella remains focused on creating opportunities for the growing market we serve. We have room to grow, incentives to offer, and a strong commitment to our residents and business community. National companies have recognized our position and continue to come to the table to invest in us.”

Coachella is one of the longest-incorporated cities in the Coachella Valley, yet it boasts the youngest population, with a median age of 26. More than 150 teams play league soccer at the recently upgraded Bagdouma Park. The combination of well-established infrastructure and a vibrant, youthful culture makes for a future of limitless possibilities. Coachella city government is maintaining its emphasis on smart growth and stable financial management to preserve an equitable jobs/housing balance.

Looking at the big picture, Coachella has an impressive list of assets. Eighteen hundred acres of land zoned for clean industry in a tax-friendly state enterprise zone. More than 16,000 acres of undeveloped land are in the city’s current boundaries and sphere of influence within easy access to freeways, rail lines, and a well-appointed regional airport. Businesses that produce a wide range of products from guitar strings to military munitions are taking full advantage of affordable land and a well-trained labor force.

The California Endowment confirmed Coachella’s potential by naming it one of 14 sites statewide for their Ten-Year Strategic Initiative to create more healthy and balanced communities that maximize their own resources through public/private partnerships. Coachella is doing its part to fill the demand for healthcare services in the eastern Coachella Valley. The city is using grant funds to conduct a feasibility study to compile critical data on general and specific healthcare needs to facilitate more robust public and private investment.

Coachella Valley Unified School District has established a healthcare academy for high school students to help them advance into the workforce of the future. One of their potential employers is the new Coachella Kidney Center. City approvals have been granted for a dedicated clinic to serve dialysis and kidney failure patients. Clinic director/owner Dr. Narendra Chandrashekar says, “We treat a large number of East Valley residents at our other clinic sites, so we know there’s a need for local patients in and around Coachella to get better access to services.”

Coachella is poised to attract businesses in specific areas that fit the region’s capabilities, such as logistics and green technologies. “We are making a concerted effort to bring resources together to provide well-paying jobs in these and other target industries. We already have a solid foundation for transportation and technology infrastructure. Just this year alone, we invested $21 million in such capital improvements,” says Mayor Garcia.

Indeed, Coachella has the goods when it comes to access to the global marketplace. The city sits at the hub of Interstate 10, State Highway 86 (also known as the NAFTA Highway), and a major rail-shipping line, putting it within easy reach of 25 million people from Los Angeles to Phoenix, plus the city of Mexicali. With plans already in place to create a multimodal network, Coachella can serve coastal California ports that ship worldwide.

Dillon Road has been widened between Interstate 10 and State Highway 86. Traffic is flowing freely along the elevated roadway over railroad tracks at Grapefruit Boulevard and Avenue 48. New signals and sidewalks are providing safe routes to schools. Gateway signs and landscaping welcome visitors along Harrison Street. A $20 million road grade separation project at Avenue 52 will be complete by mid-2013.

Most of the city lies within the Coachella Valley Enterprise Zone, which is overlapped by a federal empowerment zone. Those designations make doing business cost effective, especially during a recession when every dollar counts. In the Rancho Coachella Business Park, 200 acres of flexible-use space are ready to go with full utilities brought directly to many of the parcels.

Coca-Cola Bottling Company of Southern California recently opened its state-of-theart, 60,000-square-foot sales and distribution center in the business park. The facility is more than double the size of their former site and incorporates a fleet maintenance building, along with advanced technologies for rapid charging of equipment and solar power. It is notable as the first building in Coachella and the first in the United States for Coca-Cola to achieve LEED (Leadership in Energy and Environmental Design) Gold certification.

“The new Coachella facility enables us to increase inventory capacities while improving customer service. We’re proud of the LEED certification that was achieved through the building’s design, energy-efficient lighting, water-reduction measures, and a storm water retention plan. Imperial Irrigation District worked with us on every level,” says Coca-Cola Sales Center Manager Eric Behan.

Esterline Defense Technologies is a longtime major employer in Coachella, providing steady employment for more than 400 workers. The company’s Armtec division recently secured a $29 million government contract to produce a line of munitions that will keep its assembly lines busy for some time.

Coachella’s commercial centers continue to grow to meet demand. A Walgreens drugstore will open soon. A new Del Taco is serving customers, and McDonald’s has established a second location since traffic at its first Coachella store has been strong and consistent. Around City Hall, the Pueblo Viejo downtown redevelopment plan has been approved to create a walkable, mixed use city center where people can meet, shop, and do business. Phase 1 of the downtown revitalization, the undergrounding of utilities, is underway. Subsequent phases will provide for street-scaping and façade improvements.

While new housing construction remains subdued, Mayor Garcia points out that the city is creating proactive policies to maintain the continuity and integrity of existing residential developments. “We are aware of the need to meet the expectations of our current residents while furthering opportunities for builders to finish projects already underway,” he says. “To that end, we have a formal process and ordinance in place to ensure that future development serves the best interests of everyone involved.”

Through the general economic downturn, the city’s operating budget has been trimmed to reflect the current economy, and City Hall staffing has been “right-sized” to continue to serve the public efficiently. “We have a very capable staff and new city manager who have been in tight situations before,” observes Mayor Garcia. “They know how to get things done efficiently with the taxpayers in mind. All the groundwork going on today paves the way for the bright future we see ahead.”

The city plans to hold a Developer Day in the spring for commercial real estate representatives from outside the area to get a top-to-bottom tour of the city’s industrial sector, rail and airport access, shopping areas, housing, schools, and recreational areas.