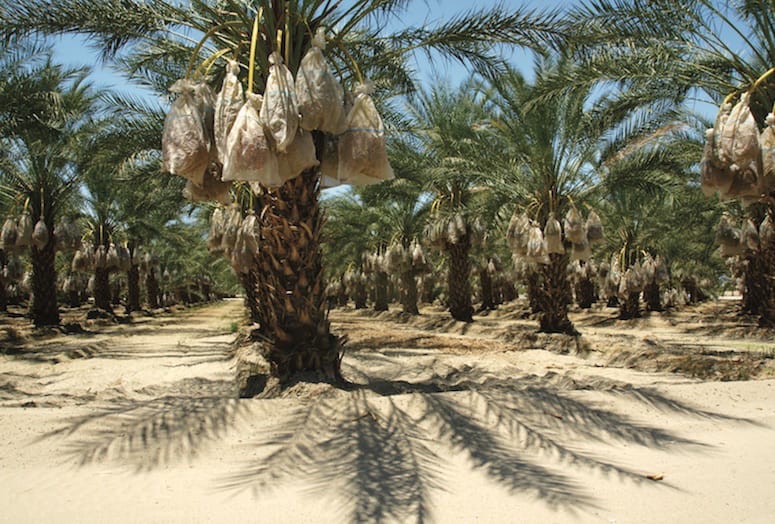 Coachella is the focal point of Hispanic culture in the Coachella Valley, offering some of central Riverside County’s unique restaurants and cultural events.
This is the city that features truly authentic regional Mexican cuisine like Mariscos El Capitan, which produces delicious seafood dishes unavailable anywhere else in the valley.
Coachella is where you’ll find traditional taquerias and restaurants like Plaza Garibaldi, which offers dishes ranging from huaraches and sopes to fork-tender pork that’s cooked al pastor — on a spit — and old-fashioned, home-style eateries like Jalisco that take you back to another time and place.

RENDERING COURTESY OF THE CITY OF COACHELLA
An artist rendering of Coachella’s new veteran’s Memorial park, which will include an amphitheater and lawn areas for special events, memorial fountain, “Supreme Scarifice Monument,” and “Hero Walk” that will feature the names and stories of local veterans engraved in travertine tile.

And when it comes to cultural events, Coachella is regionally famous for its El Grito/Fiestas Patrias celebration, which commemorates Mexico’s independence from Spain.

Coachella, in fact, has one of the largest such celebrations in Southern California with live music, folkloric dancers, and a re-enactment of Mexico’s call for independence, which took place Sept. 16, 1810. Coachella’s next El Grito/Fiestas Patrias event will take place at 3 p.m. Sunday, Sept. 18 in Rancho Las Flores Park.

Coachella is also gaining recognition for its annual Run with Los Muertos 5K run/walk event, scheduled for 6 p.m. Saturday, Nov. 5, in which participants run or walk to honor the memory of a loved one. Participants are encouraged to wear costumes or T-shirts and glow-in-the-dark gear to honor their departed family members and friends.

The event, which includes live music and dancing as well as food vendors, a beer garden and Day of the Dead art displays, takes places in Coachella’s “Pueblo Viejo” downtown, which itself is the site of the ongoing “Coachella Walls” mural project presenting the work of artists who have painted murals throughout the United States, Europe, and Latin America.

Although Coachella is increasingly positioning itself as the place to go for Mexican culture in the Coachella Valley, it’s also a city poised for tremendous growth as it embraces the arrival of new businesses.
The 70-year-old city is the valley’s third oldest, incorporated just eight years after Palm Springs and 16 years after Indio. However, Coachella offers businesses the valley’s youngest demographic and plenty of room to grow within the Coachella Valley’s largest concentration of undeveloped land. 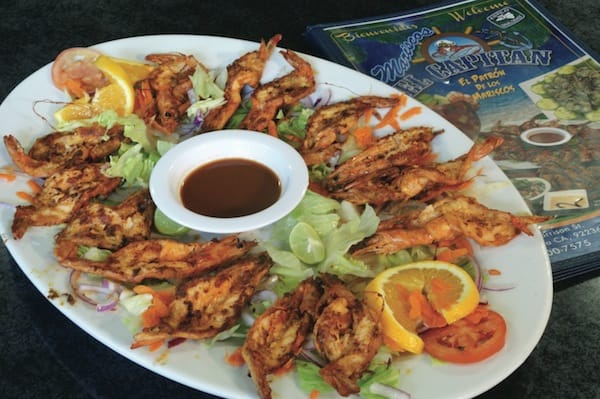 A spicy shrimp appetizer called “cucarachas” is one of many delicious Mexican-style seafood dishes at Mariscos El Capitan.

Coachella is also where you find big families. In fact, Coachella’s average household size is 4.63 compared with 3.1 in Indio; 2.6 in La Quinta and 2.1 in Palm Desert.

And Coachella continues to grow. Local officials believe their 45,407 residents will soon surpass the Palm Springs’ population of 46,654, citing the latest estimates from the state Department of Finance.

And although other valley cities have experienced decades of growth, Coachella officials note that 70 percent of their land is undeveloped, and 45 percent of it has been entitled for future development.

“While much of the western half of the Coachella Valley has already been developed and faces challenges in terms of being built out, Coachella is well positioned to become the epicenter of future growth in the eastern half of the valley,” says Mayor Steven Hernandez. 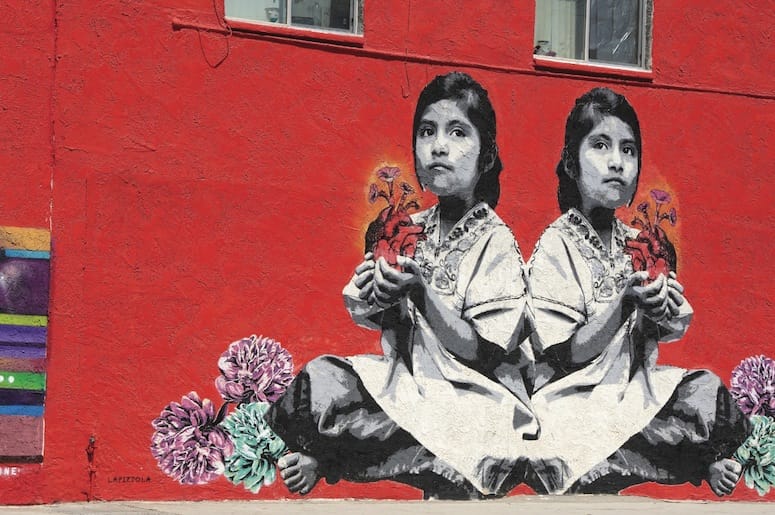 “Coachella Walls” is an ongoing mural project designed to transform the downtown area into an arts destination. The project has gained national attention and features artists who have painted murals throughout the United States, Europe, and Latin America.

Ocean Mist Farms recently expanded its produce cooler by 40 percent and made other improvements to accommodate increasing quantities of 30 varieties of winter vegetables that are cultivated in the fields of the eastern Coachella Valley as well as the Imperial Valley and southern Arizona.

Concurrently, Anthony Vineyards, which owns 50 percent of Sun Date, has built a new 37,000-square-foot freezer, enabling it to expand its produce business in the Coachella Valley. 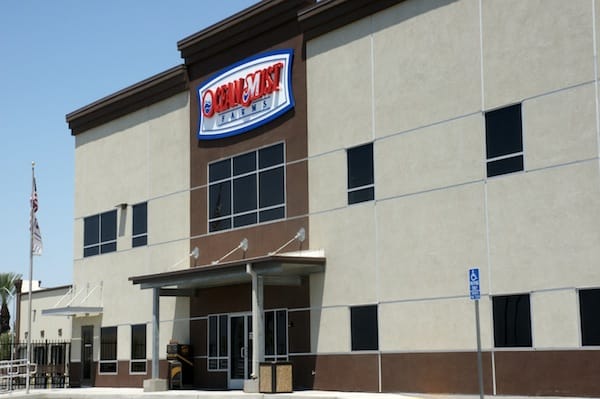 Ocean Mist Farms recently expanded its produce cooler by 40 percent and made other improvements to accommodate increasing quantities of 30 different types of winter vegetables.

Woodspur Farms, a leading global date company based in Coachella with more than 50 farms and 500 seasonal employees, is also expanding operations with a large processing and packing facility upgrade and a significant new planting initiative involving many of its date farms.

Several new businesses are also coming to Coachella, diversifying the city’s agribusiness economy with new facilities that will be used to produce cannabis for medical use. “These businesses are highly regulated and will produce additional tax revenue and employment for local residents,” Hernandez says.

Construction is expected to be completed by November, when California voters will vote on a ballot measure to approve marijuana for recreational use.

Other sectors of Coachella’s economy also are growing. In March, Desert Oasis Healthcare opened a 3,200-square-foot primary care facility in Coachella staffed with a family physician as well as a nurse practitioner specializing in pediatrics.

Desert Oasis Healthcare is a Palm Springs-based medical group that contracts with more than 100 primary care doctors who serve patients throughout the Coachella and Morongo valleys.

Other new businesses coming to Coachella include an America’s Tire store, opening soon at Avenue 50 and Harrison Street, and a new restaurant in the remodeled ARCO ampm at Avenue 48 and Dillon Avenue.

Spotlight 29 Casino is also planning to start construction later this year on a 120-room casino-hotel that is expected to open during the second half of 2017, according to Ezekiel Bonillas, director of economic development for the 29 Palms Band of Mission Indians.

“We’ve had a casino here for over 20 years, and a casino-hotel would help the tribe expand its amenities and attract more visitors to the region,” Bonillas says, adding, “It would be a bold step in enhancing our property to appeal to travelers, tourists and locals alike. Currently, Spotlight 29 features a 2,400-seat showroom, 1,500 slot machines, table games, two restaurants, and three bars and nightclubs. With the casino-hotel, we will also look at modernizing our current casino and showroom while expanding our entertainment offerings.”

Hernandez says Coachella has yet to reach its full economic potential. “We are developing the infrastructure we need, not only to accommodate future growth, but to improve our quality of life.”

ndeed, an independent survey by Probolsky Research found that 75.6 percent of Coachella residents believe the city is well-managed and on the right track.

This year, in fact, Coachella is investing more than $24 million in grant funds for new parks, roads, sidewalks, and other public safety improvements.

A fountain graces the entrance to Coachella City Hall.

Projects include a traffic synchronization project to expedite the flow of an increasing volume of vehicles along Harrison Street, the city’s main north-south corridor; the resurfacing of Grapefruit Boulevard between Third and Ninth Streets; as well as construction projects to widen some of the city’s main east-west corridors, including Avenues 48 and 50.

Coachella has approved more than $4 million in construction contracts to rebuild Veterans’ Memorial Park with dramatic new features, including an amphitheater and lawn areas for special events as well as a memorial fountain, a “Supreme Sacrifice Monument” and “Hero Walk” bearing the names and stories of local veterans engraved in travertine tile.

Other new features include an arched gateway with a dedication plaque honoring the brave men and women who have served this country; a military monument with brass seals that recognize each branch of the armed forces; military flags, including a POW (Prisoner of War) flag; a Veterans Date Palm Grove and Rose Garden; and a water conservation garden that showcases water-efficient plants.
A ribbon-cutting ceremony is planned to celebrate this park with the local veteran community on Sunday, Nov. 6, 2016.

The city is also proceeding with plans for a new 15,000-square-foot library downtown, which will be underway later this year and completed by December 2017.

These projects are only the latest capital improvements for Coachella. Last year, the city completed more than $100 million in infrastructure projects, including a new 194-kilowatt solar-powered carport for the city’s Corporate Yard that generates enough electricity to cover all of the city’s power needs in that location. The carport also has two electric vehicle (EV) charging stations capable of charging as many as four vehicles simultaneously.

It’s not all business in Coachella: The city has more than quadrupled the number of city soccer fields from two to nine since 2011.

“All of these improvements are improving traffic flow and public safety and quality of life in our community and they are paving the way for the continued growth of our local economy,” Hernandez says.
It’s no accident, he adds, that Coachella is having so much success in developing so many projects with grant funding.

“We have a reputation not only for developing shovel-ready projects, but we have a consistent track record of getting these projects done either on time or ahead of schedule,” Hernandez asserts. “So when grant providers review our applications for funding, they know that Coachella is a city that does what it says it’s going to do.”

Coachella is also careful with its planning process and regularly wins awards for the thoroughness of its planning efforts.
Earlier this year, Coachella’s General Plan update received an award of Excellence in Comprehensive Planning from the Inland Empire Section of the American Planning Association.

Last year, Coachella received a Sustainability Award from the Southern California Association of Governments. That honor recognized the city’s excellence in integrated land use and transportation planning in its latest General Plan update, which anticipates a tripling of the city’s population to 135,000 residents by 2035.