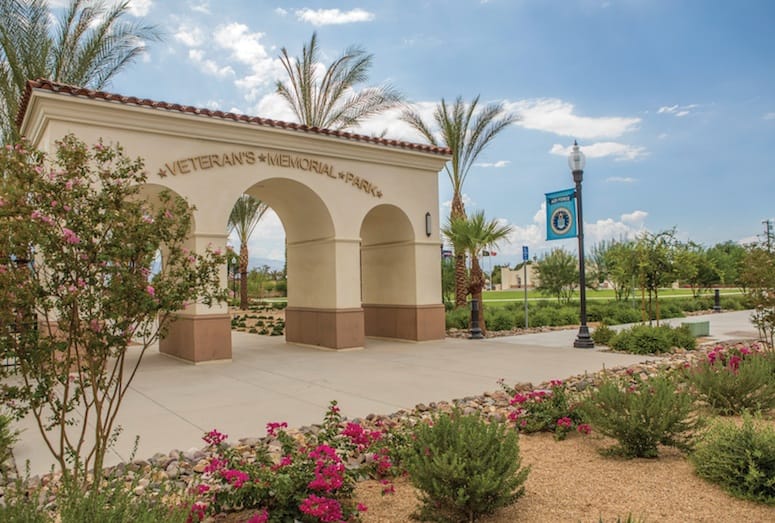 The arched entrance to Coachella’s newly remodeled Veterans’ Memorial Park was completed  last year. The park features engraved tiles that tell the stories of veterans from throughout the Coachella Valley as well as interesting anecdotes about the Coachella Valley’s military history.
PHOTOS BY TAYLOR SHERRILL & ASSOCIATES

Coachella is angling for a piece of the  valley’s tourism business with its first hotel, a new Spanish Revival–style library and conference center, and a walking tour that highlights the city’s historical and cultural sites. The city is also strengthening and diversifying its economic base by allowing local production of medical cannabis.

2017 marks a significant turning point for Coachella, for this is the year the city has enticed its first tourism and medical cannabis businesses.

Stuart Rubin of Glenroy Coachella LLC broke ground last summer on the first 68 units of a 130-unit horizontal casita-style hotel on a 24-acre site next to Rancho Las Flores Park. A grand opening has been set for April 9, 2018, which is just in time for the city to generate revenue from the lucrative Coachella and Stagecoach music festivals next spring.

“The opening of our first hotel is a major milestone for Coachella because until now we have never been able to tap into the tourism business that results from the Coachella and Stagecoach music festivals and other special events that take place here in the valley each year,” says Coachella Mayor Steven Hernandez.
“Now we can.

In fact, Hernandez says the success of Coachella’s first hotel could also encourage other developers to build hotels in the city, which has more undeveloped land than any other Coachella Valley community.
Coachella is also strengthening and diversifying its economic base by allowing local production of medical cannabis.

Cultivation Technologies Inc. of Irvine broke ground on an 111,500-square-foot facility in June to cultivate and produce medical cannabis. When the facility is fully operational next summer, it will produce $2.5 million a year in additional sales tax revenue for Coachella.

Coachella is revitalizing the city’s historic Pueblo Viejo with a new 15,000-square-foot Spanish Revival–style library and conference center, pictured in an artist’s rending. City officials say the project will transform the historic downtown area into a vibrant educational and cultural center.

“We made it city policy to encourage local investment in medical cannabis manufacturing facilities because polling told us that voters in Coachella and across California were likely to legalize the use of medical cannabis in the 2016 election,” Hernandez says. “So we saw this as an opportunity to create a new economic engine for the city and we took advantage of it.”

But while allowing production of medical cannabis provides a significant new revenue stream for city coffers, the tourism related business that springs from Coachella’s first hotel is expected to provide the biggest boost to the local economy because of the additional patrons it will bring to local restaurants, stores and fuel stations.

Located on the southeast corner of Van Buren Street and Avenue 48, Coachella’s first hotel will encompass 160,656 square feet of enclosed space, which will be broken up into two-bed, four-bed, and six-bed bungalows, all with master suites. The hotel will also have multiple private pools and bars throughout the property.

The yet-to-be-named hotel will have a modern design with raised high-quality wood floors, wall tile, as well as plumbing and lighting fixtures. Shuttle service will be provided to the Coachella and Stagecoach music festivals.
The hotel is being built by Doug Wall Construction of Bermuda Dunes and Jacobsson Engineering Construction of Thousand Palms. It is expected to permanently employ 75.

Meanwhile, Coachella is working to revitalize the city’s historic Pueblo Viejo downtown with a new 15,000-square-foot Spanish Revival–style library and conference center that will help transform the city’s historic Pueblo Viejo into a vibrant educational and cultural center.
Located across the street from City Hall at the corner of Sixth Street and Orchard Avenue, the new library and conference center will feature Spanish style arches over its doors and windows, clay tile roofs, a wooden shade trellis as well as scenic outdoor gathering spaces with a decorative fountain. 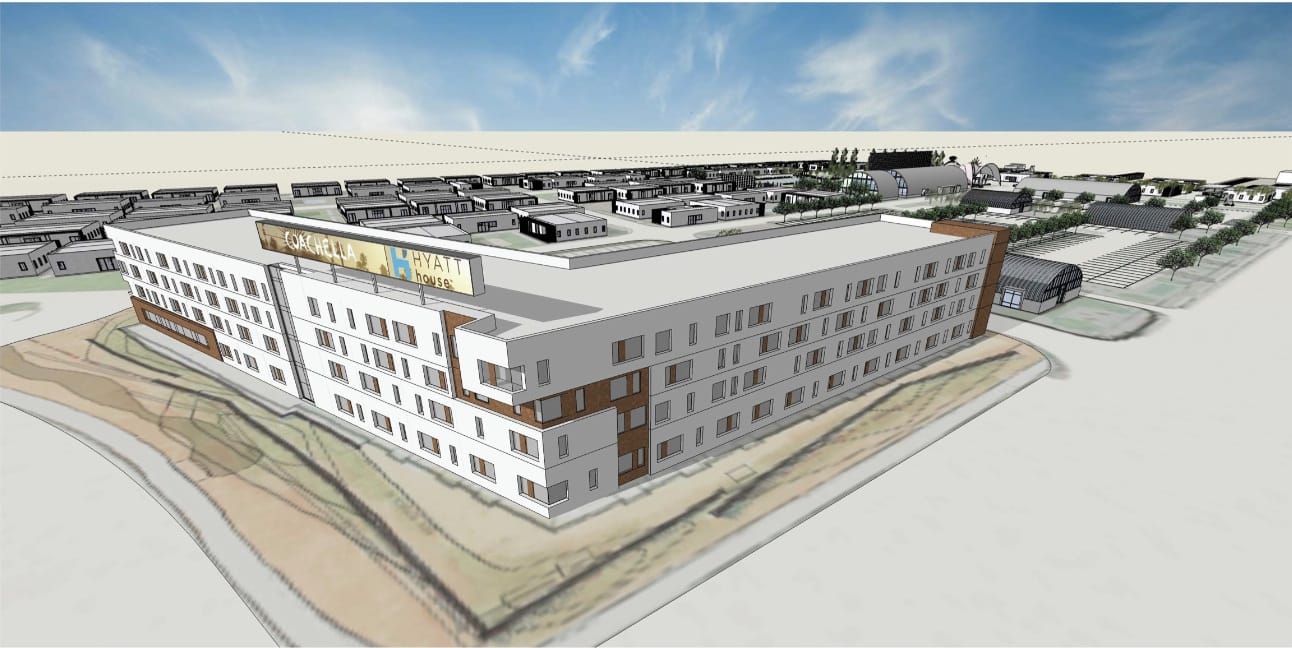 The library and conference center will also include an iconic bell tower that will be visible from many areas of the city.

“This project is going to completely revitalize our downtown,” Hernandez says, adding that the grand opening for the library and conference center is targeted for October 2018.

The new 15,000-square-foot library will be more than three times the size of the city’s existing 3,500-square-foot library and will include three study rooms, a program room as well as separate reading spaces for children, teens, and adults. The 6,650-square-foot conference center will include three meeting rooms, a pre-event lobby area that can be used for special events, as well as spaces for new restaurants, art galleries, and other businesses of interest to tourists.

Hernandez says Coachella’s new hotel, library, and conference center projects provide a major boost for the city’s nascent tourism marketing efforts, while also enabling the city to benefit from the collaborative marketing efforts that promote the Coachella Valley to visitors from Southern California, across the country, and around the world.

Capitalizing on its Hispanic roots, Coachella is positioning itself as the valley’s “Heritage City” and now offers visitors a walking tour map of its historical and cultural sites. The map, which is available in print and online at coachella.org, highlights the city’s historical buildings, scenes of Chicano political activities as well as sites where movies have been filmed.

The map also provides descriptions of each of the  10 murals that comprise Coachella’s famous “Coachella Walls” cultural art project. The project, launched in 2014, has gained national attention and features artists who have painted murals throughout the United States, Europe, and Latin America.
The map also highlights the location of Coachella’s newly remodeled Veterans’ Memorial Park, which was completed last year. The park features engraved tiles that tell the stories of veterans from throughout the Coachella Valley as well as interesting anecdotes about the Coachella Valley’s military history.

“The opening  of our first hotel is a major  milestone  for Coachella, until now we have never been able to tap into the tourism business.”Coachella Mayor Steven Hernandez

The event, which typically takes place on the third Sunday of September, is one of the largest El Grito / Fiestas Patrias events in Southern California. It features live music, folkloric dancers and a reenactment of Mexico’s call for independence, which took place on Sept. 16, 1810.

As part of Coachella’s efforts to recognize and honor its past, the city also completed work last summer on a monument at Rancho De Oro Park to honor Cesar Chavez, who fought for decades to improve wages, working conditions, and safety for farmworkers in the Coachella Valley and across the country.

In addition to these important projects, Coachella is continuing to secure millions of dollars in grant funding for infrastructure projects that improve public safety and traffic flows for the benefit of local residents and visitors.

Late next year, Coachella plans to start building an interchange that will connect Avenue 50 with Interstate 10, opening up a major new access point to the city, which has the greatest amount of undeveloped land of any Coachella Valley community.

“We are not only successfully diversifying and growing Coachella’s economy, but we are taking visible steps to improve public safety while making Coachella increasingly accessible from other valley cities,” Hernandez says, adding, “All of these efforts are making Coachella a vibrant tourist and business friendly community with an increasingly promising future.”