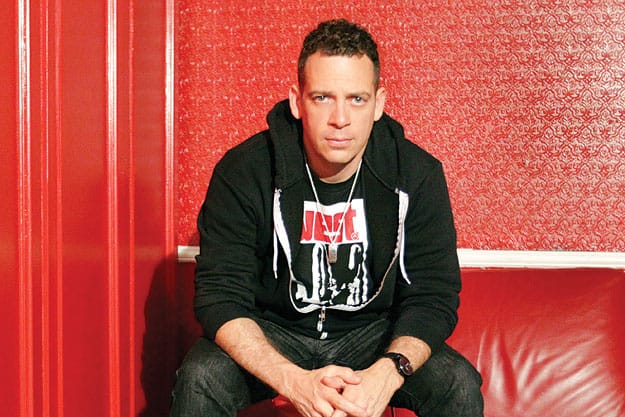 Knighted as the godfather of the electric mesh movement and documented in the film Scratch as a pioneer in the explosion of “turntable-ism,” DJ Z-Trip is a veteran of four Coachella Music and Arts Festivals. On Dec. 16-19 and 19-23, he sets sail on the maiden voyage of the festival’s Caribbean cruise, S.S. Coachella (Sky Suite, $9,000).

What’s a DJ today?
I take music out of the studio and dissect songs live in front of thousands. I play with music instead of just play music.

What has been your favorite Coachella experience?
Goldenvoice’s president, Paul Tollett, suggested an impromptu act with Beck, and I said, “Hell, yeah!” I throw him in my set and, the next thing you know, with only a 10-minute rehearsal, “Where It’s At” is getting live vocals and the crowd loses it.

You’ve mixed with masters like LL Cool J and Mick Jagger. What has been your favorite collaboration?
The biggest rush was when I opened for The Rolling Stones and performed for half a million people. That’s a small city. On the other hand, I just finished this high-end intimate wedding with Tom Petty, and that was a once-in-a-lifetime thing.

Speaking of classic rock, do you like “oldies”?
I’ve been known to throw in “Copa Cabana.” I dig the classic crooner style of Frank Sinatra and Dean Martin, and I respect die-hard performers that walk, talk, and deliver. We’re just not breeding Adeles every day.

What do you do when you’re in Palm Springs?
I’ll stop at the Ace [Hotel & Swim Club] and stick my head in to see what band is playing and have a drink.

What’s the best part of the desert?
This is going to sound corny, but the air smells so amazing after a heavy desert rain. The air is so clean and fresh; there is nothing else like it in the world.

Looking forward to the Coachella cruise?
I’m look forward to seeing what type of crowd comes aboard. Coachella always attracts the most diverse group of like-minded people; it’s the coolest thing about it.