The ritual has become rote.

Named the minor league hockey team’s inaugural frontman in June, Bylsma continues on an odyssey that’s hardly been a smooth glide across the ice. Rather, it’s been a journey with pinnacle peaks and curious valleys, where the definition of “home” finds flexible meaning in a life lived on the road, familiar to campaigning politicians, rock stars, and in this case, coaches.

The Firebirds arranged to play their first 22 American Hockey League games in Seattle and on the road as construction of Acrisure Arena was being completed. When the team makes its desert debut Dec. 18 against the Tucson Roadrunners, the Coachella Valley will become the 19th “home” for Bylsma over a pro playing and coaching career that dates back to 1992.

“My son, who’s now 23 years old, encapsulates that when people ask him where he’s from ... he doesn’t necessarily know where home is,” the 52-year-old Bylsma says, laughing. “He may not have lived in all those 18 previous places, but he’s lived in about half of them. We view Michigan as our home base. But ‘home’ is wherever the beck and call is.” 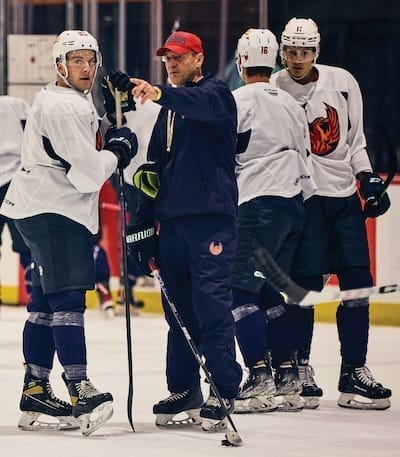 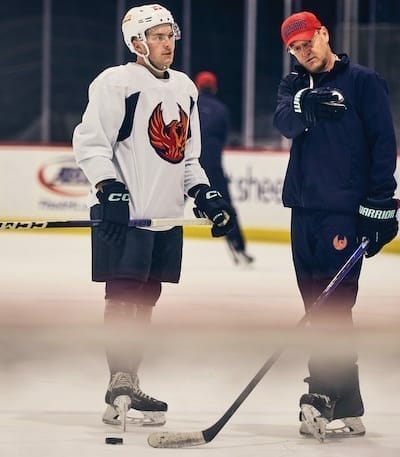 Dan Bylsma, who famously coached the Pittsburgh Penguins to the 2009 Stanley Cup title, started his Firebirds tenure with a pair of road victories.

Bylsma’s bio will amaze the desert’s hockey neophytes and should impress locals chomping at the bit to see the Firebirds tear up the ice.

As a player, the Grand Haven, Michigan, native was a gritty, underdog right-winger who skated in Southern California over parts of nine NHL seasons. He played on and off for the Los Angeles Kings between 1995 and 2000 and then for the Anaheim Ducks over four more seasons.

Segueing directly to a coaching career, Bylsma’s success is renowned, if not revered. Most palpably, in the middle of the 2008–’09 season, Bylsma, then 38, was promoted to head coach of the NHL’s Pittsburgh Penguins from the team’s AHL affiliate, Wilkes-Barre/Scranton. In short order, he led the Penguins to an 18-3-4 regular season finish — tied for the second-best 25-game coaching start in league history — en route to an upset capture of the Stanley Cup over the Detroit Red Wings. 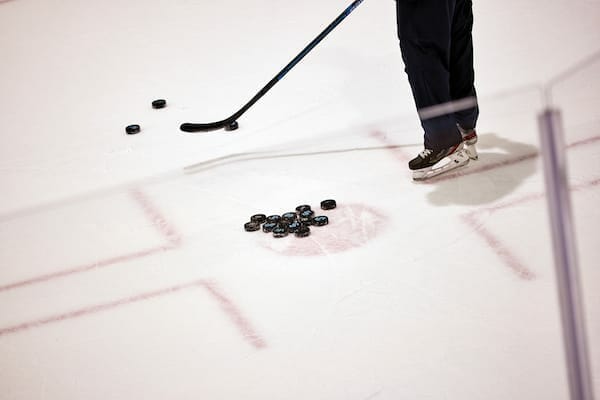 “Playoff hockey in Pittsburgh is the first thing that comes to mind when talking about home ice,” he says.

“That whole postseason run … we had the ‘white out’ with the frenzied, waving towels; the intimacy of the old, domed building — Mellon Arena — where the rafters made it feel like people were hanging over the ice. With more modern buildings, you don’t really get that anymore, the sense that 18,000 people are kind of huddled together in a phone booth all screaming and yelling. It’s an amazing experience when you can’t hear yourself think, when you truly can’t communicate with somebody who’s a foot away from you.”

Down 0-2 in the title series, the Penguins returned home to capture Game 3 after falling behind 2-1 in the opening period. Come Game 6, and behind 2-3 in the series, Pittsburgh returned to Mellon with its season on the brink.

“It was an out-of-body experience,” Bylsma says of the home atmosphere. “When we returned to Pittsburgh with our playoff lives on the line, I remember walking into the rink that morning, and there was already this buzz outside the arena with people angling for places to watch on the big screen on the lawn outside Mellon.” 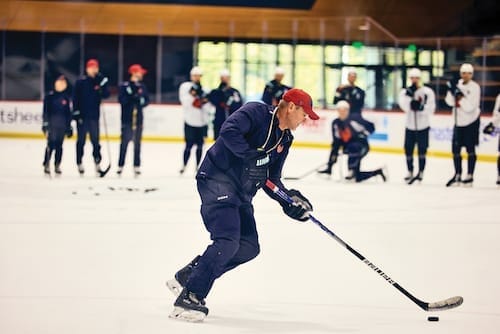 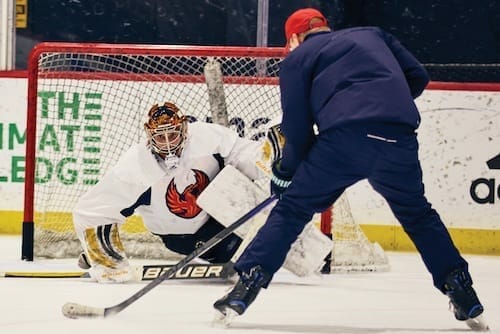 The coach’s inflection finds genuine verve in the recollection.

“As that game approached, it was so different than your average day,” he continues. “People were in the building early, fans were in their seats early. The energy, the anticipation, the nerves — just a palpable feeling at every turn of preparing for that game and starting that game. My memory of that two-plus hours is that nobody ever sat down; nobody ever stopped yelling; nobody wasn’t waving a towel.”

After a scoreless opening salvo, the Penguins held on for a tense 2-1 win before heading back to Detroit for Game 7, which Pittsburgh won, 2-1 again, and took home the cup.

Following a run in which he led the organization to five more playoffs in as many seasons, Bylsma took the head coaching job with the Buffalo Sabres from 2015 to 2017. Along the way, he won the Jack Adams Award as NHL Coach of the Year in 2010–’11 and served as head coach of the 2014 U.S. Men’s Olympic Hockey Team that competed in Sochi, Russia. 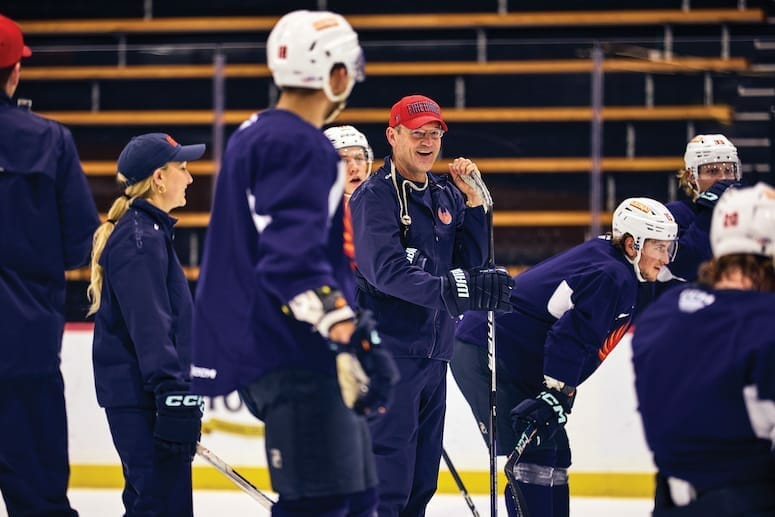 Dan Bylsma’s playful and constructive interactions with Firebirds players during a practice session at the Kraken Community Iceplex in Seattle underscore his genuine love of the game.

With an NHL career head-coaching record of 320-190-55 in the regular season, Bylsma owns the further distinction of being the league’s fastest coach ever to reach 200 career wins (achieved in 2013).

In the Coachella Valley, Bylsma returns to a region he knows well.

Having experienced the burgeon of the game across Southern California and in nontraditional hockey markets (he also played for the Phoenix Roadrunners, then of the International Hockey League), the Firebirds coach can attest to grooming and growing a local culture for the sport.

“When I played in Southern California, I wasn’t on the greatest teams,” he says. “At our home games [in Anaheim], you saw Detroit Red Wings jerseys in the stands, Vancouver and Montreal jerseys. A lot of people with hockey in their backgrounds had moved to warmer weather. But then, when I went to the Stanley Cup Finals with the Ducks in ’03, we turned those sweaters into Anaheim jerseys by virtue of our success.” 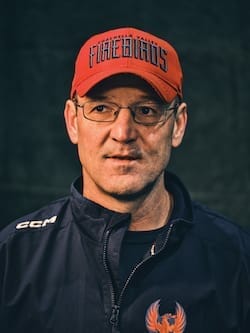 “We view Michigan as our home base. But ‘home’ is wherever the beck and call is.”

As he settles into yet another home, Bylsma understands this is a game of constant flow, with continual travel and new assignments. Mutual exclusivity of house and home is eschewed by a lone word: victory.

“We have a chance to give the Coachella Valley our own team to get excited about and make the desert a tough place for the opposition to play,” Bylsma says. “The atmosphere created by the fans, the energy of the arena — they make for a true home experience. It’s our job, our challenge as a team, to develop this base, to inspire people to make Acrisure Arena a place to see great hockey. It doesn’t come by just putting good players on the ice; it comes, ultimately, by winning games.”

• READ NEXT: 7 Gourmet Holiday Gift Ideas for the Foodie on Your List.