Mary Gallagher took a 10-year break from doing standup to raise her child, and she says it's made a difference in her act since returning in 2015.
PHOTOGRAPH COURTESY COACHELLA VALLEY IMPROV AND COMEDY FESTIVAL

Gallagher also took a break from the stage from 2005 to 2015 to focus on raising her child. The time off served her well. She has appeared on The Late Show with Steven Colbert and even her own Netflix series, Prank Encounters with Stranger Things star Gaten Matarazzo.

“Stand up comedy requires people to investigate who they are and how they see the world, and I didn't realize that until taking a long break from it and coming back around, which really served me in the long run,” she says. 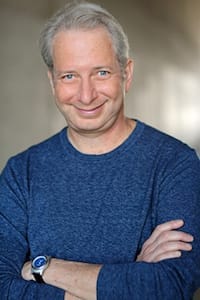 Gallagher will perform by herself at 7:30 Oct. 23, and then return the next day to conduct a workshop at 11 a.m. By going to her workshop, “guests can expect to learn to take their own comedic interests and turn them into stand-ups that make people laugh in ways they’ve never seen,” Gallagher says.

In addition to Gallagher, Palm Springs comedian Jason Stuart, who won last year’s standup comedy category, will perform and talk on “The Business of Show Business”, while veteran Steve Mittleman may have the most recognizable face after appearing on all the major late night shows and comedy specials.

The festival changed homes during the pandemic, leaving Joshua Tree for CV Rep’s expansive theater. “The seating will feel very intimate and audience members will feel as though they are on stage with the performers when viewing the shows,” says fest director Jeanette Knight.

Seven improv and sketch groups will involve audience members in their performance, says Knight. “These people take something from the audience and create pure magic with it for 30 minutes straight.”

The festival’s Covid-19 protocols include strict deep cleaning policies of areas between each show and will require all performers and staff members to show full proof of vaccination before entering the event. Hand sanitizing stations will also be available throughout the theater as well as an air handling system that sanitizes air throughout the event space.

• READ NEXT: What Else is Going On This Month? We Have the Answers.