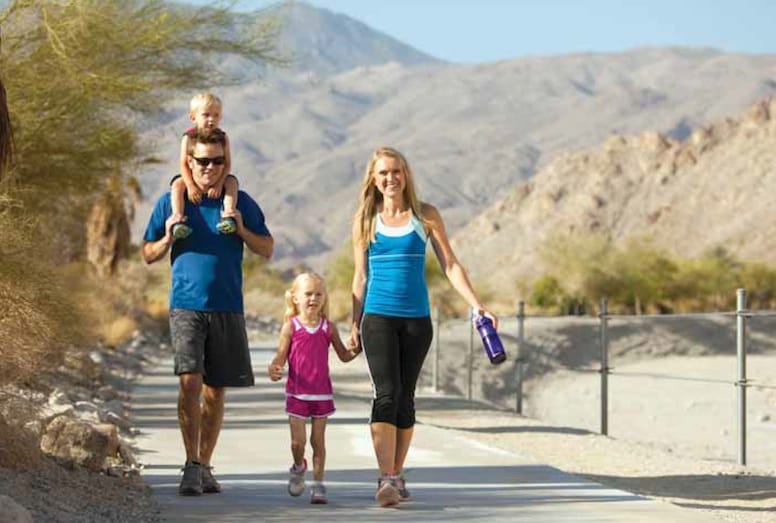 La Quinta is the most rapidly expanding city in the valley, and a relatively young population at 45 years.
Photo by Ethan Kaminsky

The Coachella Valley is an eclectic mix of peoples, lifestyles, backgrounds, ages, incomes and wealth – a demographic super mix from all over the country and even the world.

This variety manifests itself in the region’s real estate market. We have homes of billionaires not far removed from the homes of those who often can barely afford one.

We are going to take a closer look at the main cities that comprise the Coachella Valley and find out why the market is truly a tale of nine cities. Palm Springs
The city is often considered the region’s namesake – Palm Springs. The population of Palm Springs is 46,000 with an average age of 51.4 years and a median income (50 percent make more, 50 percent less) of $45,404. The median priced home is $499,000 with a median price per square foot of $256, which calculates to an average home size of 1,944 square foot. A major positive is that distressed sales have fallen to only 4 percent of total sales. As of July 1, inventory stood at 549 units with months of sales at a very low and healthy 3.7 months.

Cathedral City
Just north of Palm Springs is  the second largest city in the region with a population of 52,595, earning a median income of $44,763. The average age in “Cat” City is 35 years. It also has low priced and very affordable housing with a median price of $232,000. Inventory currently stands at 235 units with months of sales similar to Palm Springs at 3.9 months. Palm Desert
Palm Desert, just northeast of Palm Springs, has a population of 50,000 earning a median income of $53,456. While the median income is higher, the home price at $375,000 is 25 percent less than Palm Springs. The reason for this price difference is complicated and at times not always clear. When two years ago distressed sales were at 24 percent, they are now only 6 percent. Inventory is at 767 units and months of sales at a conservative 5.4 months.

Indian Wells
Indian Wells is not only the Jewel of the Valley but is also a city of ” highs". It not only has the highest median income at $100,742 but also the highest average age at 68. The city’s median home price is $840,000, but it also has the smallest population of 5,137. There are 158 units for sales with months of sales at seven, which is still considered normal for such a high-priced market. Rancho Mirage
The former residence of the late President Gerald R. Ford, Rancho Mirage is the second smallest city in the region with a population of 17,745 and an average age of 60 years. It is also the city with the second highest median price at $665,000. Current inventory is 417 units with a “months of sales” at just under seven months.

La Quinta
La Quinta is the most rapidly expanding city in the valley. In25 years, La Quinta  has grown from a population of 11,200 to 39,000, an annual growth rate of 5.3 percent. Its population is relatively young at 45 years, but with a high median regional income of $72,000. Last year it was the city with the largest price gain, and currently at $475,000 (median price). Indio
Indio is the population giant of the region with 82,000 people earning a strong median income of almost exactly $50,000. Even with its large population, it has a relatively small inventory of homes for sale (358 units) with months of sales also low at only 4.1 months, signaling a strong market. Interestingly, Indio also has a low average age of 32 years.

City of Coachella
The City of Coachella has a solid population of 50,000 with an average age of 25. However, it has one of the lowest median wages ($42,000). Its housing market is currently very weak with only 14 homes listed for sale. Sales are likewise very meager at only 13 units a month. This compares to the similar size city of Palm Springs with average monthly sales of 140. The city's median price per square foot stands at $95.

Desert Hot Springs
This city is relatively small with a population of 28,000, but is handicapped with a very low regional income of $32,880 (median). This has kept home prices low. The median price is currently $155,000 with an inventory of 184 units and months of sales at 4.3 months.