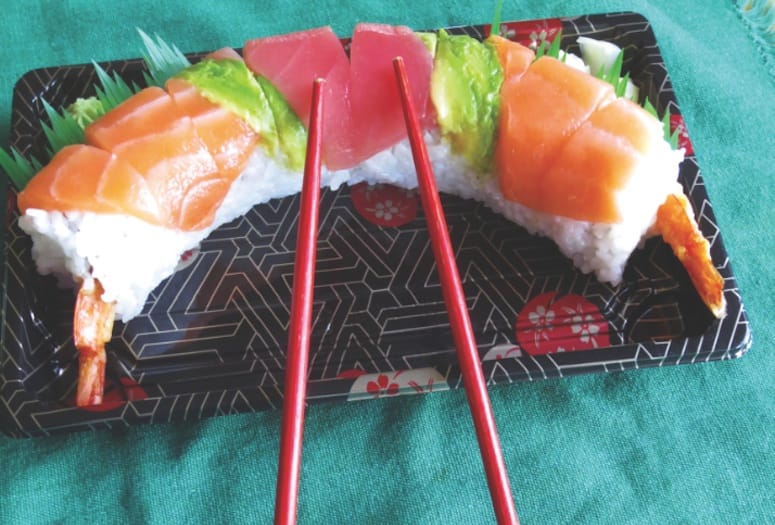 If you’ve never been to France, you might not know how a real baguette tastes. A real baguette is not simply a rod of baked wheat. A real baguette does not have a squishy, dense interior encased in a crust that yields to finger pressure about as well as the Pillsbury Doughboy.

Which is why I say merci beaucoup to Helene and Christophe Meyer, owners of Peninsula Pastries. They hail from France, and import two tons of French flour every couple of months to make the hard, crusty baguettes with the light, holey interior we bread snobs crave. (Helene eats one every day; in France, it’s the law.)

The bakery’s flour power is forged in a region renowned for growing the highest quality wheat. Peninsula’s wheat is milled in a traditional process by a father-son team who sell mostly to craft bakers like the Meyers, who use two different types of flour, one for bread and one for pastry.

Superior raw material is only one requirement for making superior bread. It’s hard work to turn grain into the staff of life, and the Meyers maintain a high culinary bar by kneading and baking daily. Christophe is the only baker, and he bears the cut biceps that speak to the physicality of the job.

The Meyers also limit their yield. The bakery, at 611 S. Palm Canyon Drive, No. 1, opens at 8 a.m. (Monday to Saturday), and sells exclusively pastry until the afternoon. At 1 p.m., the bread, warm from the oven, appears. Peninsula closes at 6 p.m. Shop early, or reserve in advance (760-832-6486) to ensure you’re not left with crumbs. The bakery’s most popular item is the almond croissant; view the generous menu of products  on its Facebook page. You walk through the door at Fil-Am Oriental Mart in a dinky, nondescript Cathedral City strip mall, and the aroma of curry hits you like a ton of frozen smoked galonggong. The grocery offers more Asian products than the Philippines has islands, and its hot buffet with three tables makes post-lunch shoppers sorry they grabbed a  burger instead of the Sarciadong tilapia simmering next to shelves of jarred stir-fry sauces and chilli paste.

Shopping here is a multisensory experience.

I see a few Asian faces, but the anonymous clerk who answered my questions because owner Shirley Mendoza was busy, says Fil-Am, at 34010 Date Palm Drive, is also popular among Latinos and Caucasians, many of whom bring in recipes they’ve downloaded from the Internet as their shopping lists. They’ve never cooked this stuff, but here’s where they learn how. In addition to noodles, ever-popular items are the pastries displayed at the checkout counter the way other stores display tabloids screaming headlines about who was most recently insulted by Kanye West. I’d much rather peruse a package of Bibingka Galapong (special rice cake with cream cheese and salted egg) than that tabloid trash.

Other big sellers here are fresh roots of turmeric and galangal (a kind of ginger), which the clerk says “you can’t get anywhere else in the valley.”

The fresh produce is limited, but the frozen food section is an adventure in wonderland. Shop here for grated purple yam and bitter melon leaves, tubs of Indian mackerel, and Beef/Chicken Balls, which for only $6.99 is probably worth the price of seeing how two such different creatures can possibly share the family jewels.

The cooler is stocked with fish cakes, seaweed salad, fresh quail eggs, Yama Java iced coffee, and bottles of “Taste of Nirvana: Young Coconut Juice.” Who knew transcendence was yours for only a buck fifty-nine?

Racks and racks of canned, bottled, and jarred goodies spur the Occidental imagination. Fresh tamarind (concentrated), mango extract, milkfish in corn oil, and “Special! Chef’s Choice,” a can of aloe vera in syrup, for only 99 cents.

I’ll have some lotus stick biscuits, a mung bean cake, and a bottle of gingseng juice. It’s a brave new world. Oatmeal at POM restaurant in Indio.

The first time I stayed at Fantasy Springs Resort in Indio, I ate at its POM restaurant. That meal ruined me for further breakfast discovery, because every time I return, I order the same thing: oatmeal. POM might have the world’s best Chorizo Frittata, but I don’t care. Make mine oatmeal, with nuts and some fresh fruit on the side.

Why, I asked Executive Chef Freddy Rieger, is POM oatmeal so good? I expected a cagey answer, like, “We have a secret ingredient we call fairy dust.”

As if.  “When you find the brand you like,” Rieger says, “you stick with it and you cook it the same way every time. There’s no magic in it.” Or, apparently, fairy dust.

POM found a brand of steel-cut oats it liked, and has made it the same way since the restaurant opened in 2008. “We cook it in water and milk,” Rieger says. It’s that simple.

Steel-cut oats result in better texture because you start with a coarser grain, but you can find them everywhere. What else is going on here?

Maybe it’s not the oats, but the ambiance. Notice the placemats, and you might wonder why they’re printed with apparently random phrases whose common acronym is the restaurant’s name. Some of the terms are regional (“palms on mountains”), some are fun (“perfect olive martini”), and some are simply mystifying (“ponder our mirage”).

According to Mandi Witkower, director of advertising, when the resort management was involved in loan negotiations for upgrade funding, the process was complicated and protracted. Naming the restaurant was sort of an afterthought. Nobody had a Eureka! name moment, so they decided to use a legal aspect of those negotiations they all referred to by its acronym.

The name POM, Witkower says, “is kind of an inside joke among the executive management.”

The suits sat around a table and made up a bunch of other terms to fit the POM acronym that got rendered into the stair-step layout of the placemat that invokes the restaurant’s design.

Do I know which of the placemat phrases spawned the name? I do.

Go to POM, at 84245 Indio Springs Drive, order the oatmeal, and ponder our meal.

My mom used to have a refrigerator magnet that looked like a real piece of sushi, its glossy orange fish eggs wrapped in dark green seaweed. It was plastic, but I’m sure it tasted better than every piece of packaged, store-bought sushi I ever tried.

As evidence of either insanity (doing the same thing over and over and expecting different results) or mindless optimism, I keep buying sushi from different grocers in the hope somebody finally figures out how to package morsels of fish and rice that, if not exactly restaurant quality, at least are closer to actual food than to kitchen appliance décor.

Unlike all other retailers, whose names I will not disclose in order to protect the guilty, three Coachella Valley Albertsons stores make and sell the tasty, properly textured sushi that prompts us take-out fish fans to return regularly to watch the sushi chef work her magic that ends in our disappearing act of eating it.

The key to Albertsons’ sushi success is a short attention span. Pada Sushi contracts with the supermarket to supply the product and the people who make it, and, says Pada VP Don Kim, “We make it fresh daily, in the store. We throw away anything left over at the end of the day.”

That applies not only to the fish, but to seaweed, avocado, and any other ingredient, including the rice  — unlike the dry, leaden versions elsewhere, Albertsons’ sushi rice remains fluffily sticky. Pada sushi uses no preservatives, and I am a witness: Ethereal just tastes better.

Long-term investments, however, are made in the humans. Not all valley Albertsons sell the Pada product, Kim explains, because it takes time for the Orange County-based company to find the right sushi chefs and to train them properly.

For now, you can fish for primo packaged sushi at stores in Palm Springs (1751 N. Sunrise Way), Rancho Mirage (40101 Monterey Avenue), and Palm Desert (74590 Highway 111. But the company hopes to expand to the Palm Desert store on Washington Street as soon as it can find and train the right chef.