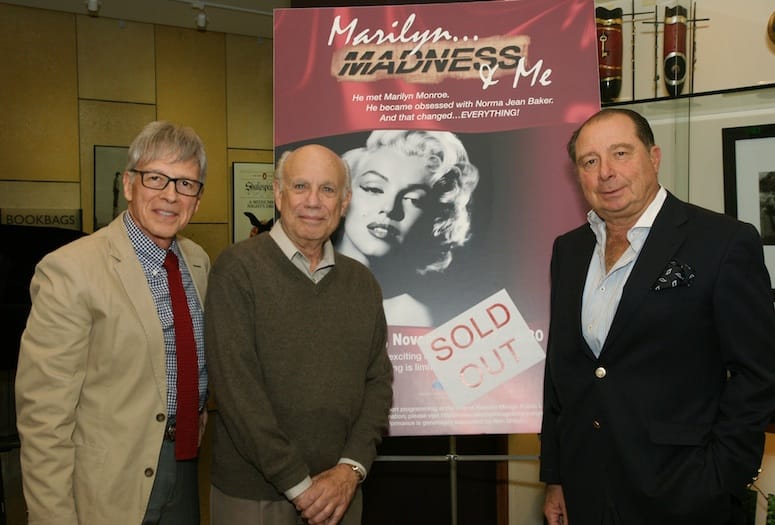 While Palm Springs wonders if the famed Marilyn statue will return to its rightful place in the downtown area, a Coachella Valley contingent is trying to bring Marilyn Monroe’s story to one of the city’s theatre venues.

The trio of concept creator Didier Bloch, playwright Frank Furino, and director Joe Leonardo are hoping a Kickstarter campaign that runs through the end of September may provide them with the funds to bring their play, “Marilyn, Madness & Me,” to Palm Springs.

They even have a place picked out for the play – the Pearl McManus theatre inside the Palm Springs Woman’s Club.

But even if this attempt fails, they are determined to find another way. It’s been 53 years since Monroe’s death in 1962, and yet there continues to be a fascination about Norma Jean Mortenson (her real name). (Left) Alison Janes with Adam Meyer during the play's run at the El Portal in North Hollywood.

“I don't know if there’s another person on the planet that has as many websites devoted to them as Marilyn,” says Furino. “You can go to a website that is totally devoted to her dog, her perfume. It's incredible. And she sustains this interest all these years later. You could point to Elvis, you could point to James Dean, you could point to John Kennedy. But she's the only female who has sustained that kind of interest over that length of time.”

Furino’s script has seen the light of day, actually. The trio tried to stage the play in Palm Springs two years ago, but could not find a venue that would give them a six-week run. So they opted for the El Portal in North Hollywood, and both actors (Adam Meyer and Alison Janes) and director Leonardo received Broadway World Award nominations.

That has kept their appetites whet ever since to bring it to Palm Springs. “This play should live,” Leonardo says. “It is a really cool piece of work. It really is. I wouldn't be so enthusiastic for so many years if it wasn't.”

It would be a fitting tribute to Bloch, who owns Café des Beaux-Arts on El Paseo in Palm Desert. He was the one who pitched the idea to an unsuspecting Furino, a former television scriptwriter for shows like Dynasty, when he was dining at the restaurant.

“Didier walks up to me and says ,’You are a writer, no?' (laughter),” Furino recalls. “I'm a writer, yes. He has this idea, and he hands me one sheet. It was all in French. Now I can fake French, but I don't know French. But I read the title and the title said [Moujanou de Norma Jean]. Diary of Norma Jean. I said, 'I can't read it'. A couple weeks later he hands me the translation, I read that page, and I didn't get down to the bottom of the page. I was stunned by the premise of it. In one minute, the male character becomes obsessed not with Marilyn, but with her alter ego, Norma Jean.”