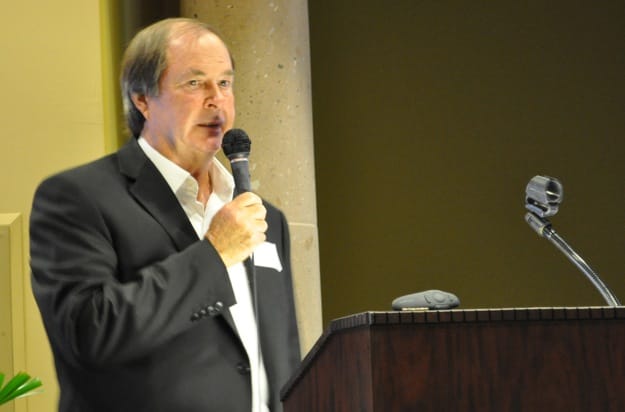 Vic Cooper of Market Watch LLC expects the new home market to return to its 20 percent level within the next two years.
Jim Powers

Currently, Baby Boomers constitute 26 percent of the U.S. population, according to Pew.

But where is this huge wave of retirees going to live?

Right now the battle to obtain new housing in the Coachella Valley is fierce because there is very little new inventory. The economic recession starting in 2007 and the housing market collapse created an economic blockade to new construction.

Sun City Shadow Hills was the only housing development in the Coachella Valley to build through the recession due to demand, according to Vic Cooper of Market Watch LLC during its April 30 seminar in conjunction with Palm Springs Life at Villa Portofino in Palm Desert.

“We can only get 900 units of new home construction this year,” Cooper said. “The Baby Boom market will put an increase demand on the new home market and there will be no supply out there to match that demand.”

But that picture is very slowly starting to change. Julie Miller, event director at Villa Portofino, reported that 23 houses in the $200,000-plus range were sold in the last 30 days at the 55-plus active adult community.

Cooper indicated the normal housing market ratio is 80 percent resale homes and 20 percent new homes. New homes fell to 6 percent over the last five years, Cooper said, but in just the first quarter of 2013, the figure jumped to 11 percent with 250 new home sales.

“That is a trend we expect to continue to happen until we get back to 20 percent, and that will take about two years because builders can’t get the supply on the market,” Cooper said.

Resale prices are also showing an increase during the first quarter as the number of foreclosures and short sales have decreased to just 3 percent of the market. The Coachella Valley’s median price per square foot rose 8.4 percent to $140 or just 6.4 percent from the 2013 projected target of $150 per square foot, Cooper said.

However, there are still cities struggling to catch up. Coachella, Indian Wells and Palm Springs are below the square footage marks of a year ago.

In addition, Cooper said the coastal market has returned to full price from where it was before the recession.

“As feeder markets to the Coachella Valley continue to return equity, some of the coastal markets like Newport Beach and parts of Los Angeles are already exceeding or past the historical highs of 2007. So the amount of fuel that can enter the market out here in terms of equity will continue to just expand hugely.”