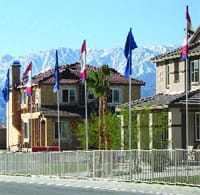 "Oh give me land, lots of land, under starry skies above,” goes the Cole Porter song “Don’t Fence Me In.” Thanks to a bountiful legacy of farming, land (lots of land) is the name of the tune lifting Coachella to the top of the charts. More than 70 percent of Coachella’s 32 square miles is composed of vast tracts of rural acreage that provide a blank page upon which to create beautiful new music.

From its early 1990s origin as a Southern Pacific Railroad sidetracks to its current high profile at the confluence of Interstate 10 and California Highway 86, “The NAFTA Highway,” Coachella is a transportation hub with a market reach to 25 million people and growing from Los Angeles to Phoenix to Mexicali. The quintessential American farm town has grown from 2.5 to 32 square miles with a population of more than 35,000.

This year marks Coachella’s 60th anniversary of incorporation. Authority to annex land within its sphere of influence could double the size of the community in the next decade. “Our City Council and staff share a dynamic vision of a vibrant community that celebrates its heritage and provides its residents with the best quality of life possible,” says City Manager Jerry Santillan.

The city’s blueprint for growth — it’s General Plan — adopted in 1998, provides a framework to take on community expansions in a measured way. A 4,500-acre commercial and entertainment district poised to complement the Indian casinos on Interstate 10 and Highway 86 includes plans for hotels, professional sports venues, and performing arts facilities.

According to the vision plan being formulated by DCE Planning, the district is intended to offer a unique opportunity for town building that capitalizes on the city’s gateway location to the Coachella Valley. Over the next two decades, the district is expected to become a destination for lifestyle shopping centers, golf and equestrian facilities, and new urban sustainable neighborhoods. Long-term economic opportunities encompass an institution of higher learning dedicated to job training for industries, including high tech; an upscale RV country club with resort amenities, a soccer stadium, and a conference center.

Coachella is a stable, year-round family community offering jobs in manufacturing, processing, education, construction, and entertainment. Esterline Defense Group, a world leader in combustible ordnance; Precision Gunite; and Imperial Western Products, a manufacturer of livestock feed and biotane fuel, may not be household names, but they are large employers and solid business concerns that reach well beyond the Coachella Valley.

Fulton Distributing is the newest company to make Coachella home. In business locally since 1950, the wholesaler of paper goods and janitorial supplies was purchased in 2000 by three former corporate guys turned spirited entrepreneurs: Bradley Bastyr, Jan Lotto, and Jim Maruillo. After unsuccessfully negotiating with a neighboring city to locate their new distribution center, the partners found Coachella to be business-friendly and responsive.

“Our market is the Coachella Valley, Imperial Valley, and Yuma, Arizona, so we’re big on Coachella. It makes sense for us. We see the growth potential, and we like the labor-friendly atmosphere,” observes Lotto.
Ernie Ball, an icon to concert giants and casual musicians around the world, turns out 250,000 music-related products each day from its 58,000-square-foot manufacturing facility that employs nearly 300 people on a 14-acre campus. Its Music Man guitars and Slinky electric guitar strings are well known to legends like Paul McCartney and the new wave of electronic and hip hop artists who frequent the monster Coachella Music and Arts Festival nearby.

An exceptionally high home ownership rate of 50 percent in Coachella reflects a strong culture of family life. That hallmark of the American dream is about to get even sweeter with the announcement of Lomas del Sol, a 2,200-acre planned community south of Interstate 10 and east of Highway 86 in the foothills 600 feet above the valley floor.

Fiesta Development, a private company headed by partners Larry Redman and Richard Ashby, hopes to have approvals in place by the end of the year and begin construction in the spring of next year on what ultimately will include more than 8,000 housing units, ranging from garden apartments to mini-estates with sweeping views of the entire valley. Two golf courses, 1 million square feet of commercial and office space, and a hotel site will be easily accessible from Interstate 10 via a new interchange.

Because of the unique topography of the site as it changes elevation from the valley floor up the Chiriaco Summit grade, 46 percent of the project land will be open space dedicated either as parks or golf course. Also planned are a fire station, electrical substation, lakes to hold reclaimed water for irrigation, a 35-acre sports park, and miles of walking paths and horse trails.

For the first time, residential development is taking shape north of Interstate 10 in areas served by Desert Sands Unified School District. Two elementary schools, one middle school, and one high school are in the works. The city merged four separate project areas in order to refinance its redevelopment bonds to lay the groundwork for future infrastructure the community will need as it grows.

The flip side of an increased tax base from new commercial activity is the need for more public services like public safety and recreation. Says Coachella Finance Director John Quinn, “We intend to honor our commitment to our citizens by identifying and planning for community needs well in advance.”

Adding to the value of an investment in Coachella are employer/employee incentive programs offered by the Coachella Valley Enterprise Zone and the Desert Communities Empowerment Zone. An application to extend the life of the Enterprise Zone for another 15 years is pending. Businesses and residents enjoy competitive electricity costs from Imperial Irrigation District, a consumer-owned provider, and high-quality water and sewer services through a municipal water and wastewater system.

Retail is booming everywhere you look in Coachella. The Coachella Gateway Center and Jackson Square plaza provide a combined 328,000 square feet of new retail shopping opportunities. Mayor Jesse Villarreal calls Coachella “the golden city,” because several of the name-brand stores recently opened here soon found their location to be No. 1 in sales in the state. “Businesses are finding willing consumers with a pent-up demand for their products,” says Villarreal.

Coachella’s roots in agriculture are still thriving with a busy cadre of growers, harvesters, processors, shippers, and produce brokers. Attractive housing developments are meeting the demands of young families, empty-nesters, and seasonal visitors. Shopping and dining options are growing. The Coachella Valley’s golden city is truly shining in the sun.