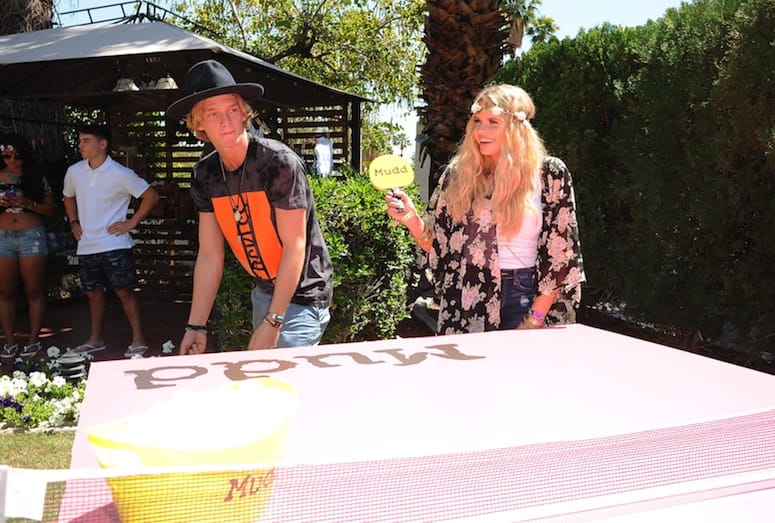 Cody Simpson and his sister Alli double up on the MUDD ping pong table during a Coachella Weekend One brunch and party at the Ingleside Inn in Palm Springs.
Photos by Angela Weiss/Getty Images

It was the ultimate Sunday Funday at The Music Lounge presented by MUDD and Ocean Pacific (Op) where celebs ended Coachella Weekend One with brunch and a pool party at the Ingleside Inn in Palm Springs. Kellan Lutz serve up at The Music Lounge at the Ingleside Inn in Palm Springs.

The Simpson siblings were ready to continue their Coachella weekend taking a head to head match at the MUDD ping-pong table. Cody showed no mercy against his lil sis hitting her some curve balls across the table.  Alli, also the recent face of MUDD, was decked in her favorite pieces from the collection, while Cody was dressed cool and casual in a tee, shorts and Vans sneakers.

Cody kicked off the pool party from the Op Surf Shop where he popped in to scope out a new pair of board shorts. Alli stopped by the MUDD festival cabana to check out the latest collection from the line and tried on everything she could get her hands on! Then Alli made her way to the flash tattoo station to add the perfect touch to her Coachella look. Jamie Chung hangs by the pool.

Jamie looked chic in a boho white short-sleeved dress, cat eyed sunnies and wide-brimmed hat. She didn’t show up solo either. She was accompanied by her new love of her life – Ewok! The adorable 4-month old pooch stuck by her side and joined her when she stopped by the flower crown station to make her very own creation.

Twilight star Kellan played a few rounds of ping-pong with his buddies at the MUDD festival cabana. He worked up a sweat shedding his Hawaiian button up shirt. The celeb stud then popped over to the Op lounge where he had fun juggling the Op branded ball. Celebs ended Coachella Weekend One with brunch and a pool party at the Ingleside Inn in Palm Springs..

Jessica was styled fun and flirty in a colorful floral romper, House of Harlow necklace and wedges. She was eyeing the new hot pink one-piece with a trendy fringe top.
Noah, who recently starred as the face of the brand, showed up styled out in the newest MUDD collection. She was rocking her newly dyed hair with grey and purple streaks. She made her way to the flower crown station to create a festive accessory to add to stylish new do.

Carmen showed up outfitted in a neon long-sleeve lace dress looking beautiful as ever. She linked up with old friend Patricia who scored Carmen’s digits and posed for a cute selfie.