The holiday season presents a welcome opportunity to set aside stresses and inspire good cheer. If you’re normally not one to deck the halls, now is a good time to start. After all, decorations boost dopamine levels, says Amy Morin, a psychotherapist and host of The Mentally Strong People podcast. (Her 2015 TEDx Talk on mental strength ranks among the series’ most popular of all time with almost 15 million views.) “The bright colors, the lights, and the music can have an effect on our brains,” she shares. “After this stressful year with the pandemic, many people are very interested in an extra dopamine boost. And seeing the decorations and the lights might help them experience some sense of normalcy.” Those traditions often center around a bustling kitchen and dining table. So we asked two local event gurus for tips on styling the perfect tabletop.

No matter how small this year’s holiday feast may be, approach the evening with intention.

Cathy O’Connell: “I always start with: What is the purpose of this gathering? What’s changed in the past year to make it different? What experience do I want people to have? You can make every decision based on the answer to those questions. This is not dinner at the country club. This event is special, and how you design it — how you set the table, the details, the little touches — that’s what makes people feel special when they walk in a room.”

Joey Lizotte: “Lighting makes a huge difference in setting a mood. Everyone looks great in candlelight. Music in the background is super important. Prepare ahead of time so that you’re not cooking or pouring drinks the whole time. Otherwise, you’ve removed yourself from the party, and all your guests don’t get to hang with you.”

Every holiday tablescape begins with a simple foundation.

JL: “You’re not creating a centerpiece and plopping it down in the middle of the table. 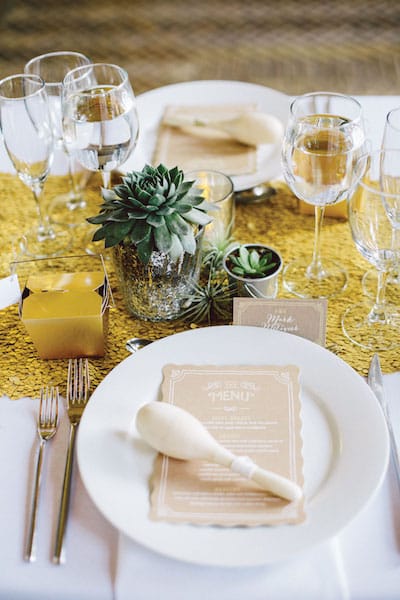 You’re building something on the table, creating something by adding different elements. One of the first elements I always use is princess pine. It gives you your base. Sometimes I add ornaments or flowers and, of course, some kind of light.”

CO: “You don’t want anything too tall on your table. If you buy flowers raw and put them in a vase, chances are you’re going to move it for dinner. I prefer things that can stay and look beautiful the whole time.”

ADD A DASH OF THE DESERT

Find inspiration (and components for your arrangement) in the scenery that surrounds you.

JL: “I love succulents, and they’re budget friendly. Use the spray that looks like snow on the succulents to give it a wintery feel. I think they’re beautiful if they lay on the table. Cut them out of the pots, and they’ll last for weeks. If you want a midcentury feel, use some ornaments. But do fun colors — orange, blue, or white.”

CO: “For somebody who’s on a budget trying to create a fabulous table, just do a whole bunch of candles in different containers. Take a glass jar, fill the bottom of it with sand. Now, when the candle drips, it just drips in the sand, and you throw it away. You don’t have to get wax out of a glass container, which is a pain in the neck.”

CHOOSE ONE SPOT TO SPLURGE

Get the most bang for your buck when you focus high spending on one area.

CO: “I would splurge on some nice mercury glass candleholders, something that will add sparkle. They’re not necessarily expensive, but you’re going to want a lot of them. They’re timeless, something you can keep forever.”

JL: “Do a dessert table, as opposed to a plated dessert, with several small options. In general, I usually get one or two cakes. I don’t really eat that stuff, but everyone else does, and it’s fun.”

’Tis the season to give, so don’t forget to treat your holiday guests.

JL: “I usually have a little gift for each person. It doesn’t need to be expensive, just something fun and cute; it could even be a cookie in a bag. Last year, I happened to see these Tiffany blue, suede boxes, and that’s what I built my table around. The boxes were part of the centerpiece, and they each had a nametag on them. And then I filled them with lotto tickets — something simple that everyone got a kick out of.”

CO: “At every place setting, we’ll have something special for each person. I’ll do handwritten notes with the name on the outside, and it says something like, ‘Hi Dad, I’m so glad you flew down to be with us today. And here’s why …’ ”

Cathy O’Connell, co-founder of COJ Events in La Quinta and president of the National Gay Wedding Association, once hired the Grinch from Universal Studios Hollywood as entertainment for a client's holiday bash. cojevents.com

Joey Lizotte, who runs Artisan Event Floral Décor in Palm Springs, is responsible for several big holiday trees on view around town, including the giant at Eisenhower Health. artisanevents.net

• READ NEXT: Six Coachella Valley Chefs Share the Recipes For Their Fave Dish at Home.