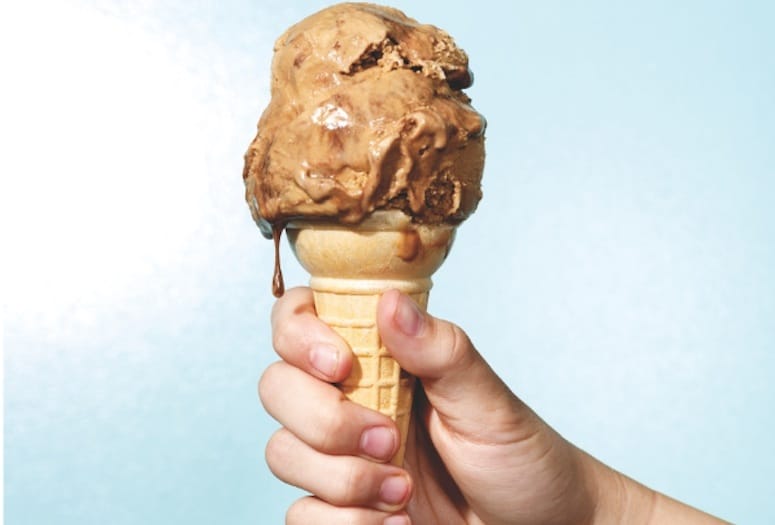 Kauai pie is the most popular flavor at Lappert’s Ice Cream. What’s not to like about coffee, chocolate fudge, macadamia nuts, and coconut?
PHOTOS BY MISHA GRAVENOR

One summer when I was in high school, I worked at a Tastee Freez where the soft-serve ice cream was a stream of goo pumped into a cone as a platform for the chemically enhanced dipping chocolate that solidified around it in a flash. It looked — and tasted —like plastic. I ate some practically every shift.

My youthful indulgence signified an inability to discern food from folly. But Lappert’s Ice Cream in Palm Springs and Palm Desert qualifies as an occupational hazard for owner Adam Page. He eats the product every day, but the tall, silver-haired merchant is as trim and buff and good-humored as if he were selling health food.

Cognoscenti consider Lappert’s Ice Cream mental health food. Some even know that the Northern California family business started in 1981 and migrated to Hawaii a couple years later, where its identity as a signature island brand solidified as fast as dipping chocolate. People strolling downtown along Palm Canyon Drive who have tasted the Hawaiian treat light up when they spy the sign for its mainland doppelganger.

Page came relatively late to the party. Before he opened the stores, he says, he seldom ate ice cream. “I never bought Ben & Jerry’s, or Cold Stone Creamery. It’s too expensive.”

Lappert’s Ice Cream is too, but Page points out that a typical scoop from a typical ice cream shop is 4 ounces; his scoops are at least 6 ounces. 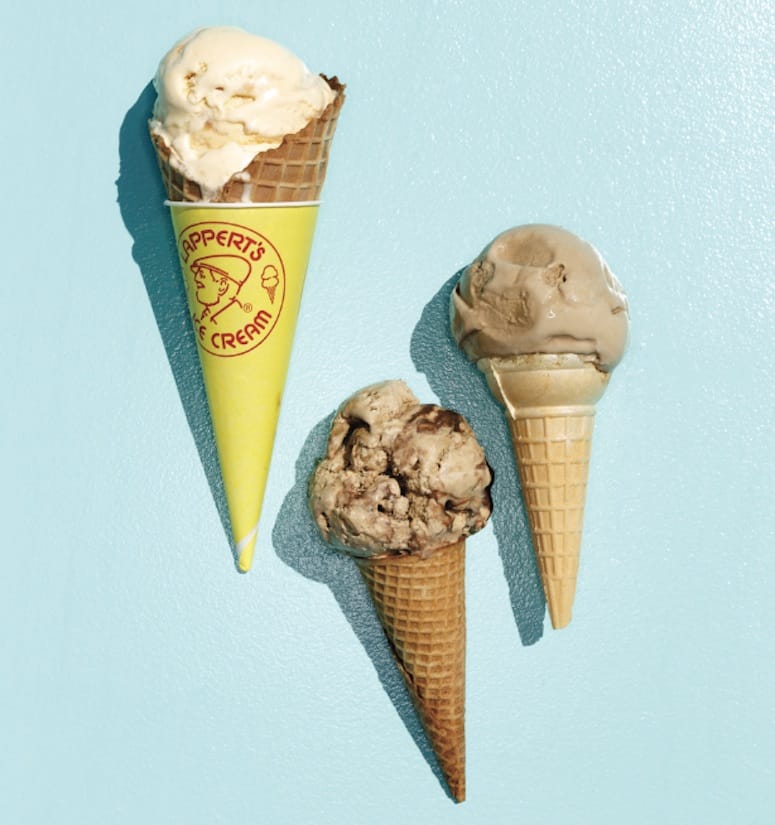 He samples his wares not just because he likes them, but because he hates waste. (Or because he’s in deep denial?) “When the cone you’re making cracks, and you have to make a new one for the customer, you eat the first one. When you make a shake, … you have leftover ice cream. … I’ve gained probably 15 pounds since opening this store,” he admits, sipping a Coke Zero under the fake Tiki umbrella that decorates the Palm Springs storefront.

His favorite flavor is “whatever looks good,” but he’s partial to the Kona coffee. It’s flavored with real, cold-filtered, bold coffee, not coffee flavoring. It is to other brands as mixed martial arts is to finger wrestling.

The date ice cream, too, puts the also-rans out to pasture. It’s made from whole fruit, not the date sugar crystals most local purveyors of date shakes employ.

Today, Lappert’s has branded stores across the continental U.S., and although there’s still a family connection, they have no relationship with the Hawaii operation. U.S. store owners like Page buy the rights to use the name, and promise to uphold the brand’s quality. All Lappert’s ice cream sold on the mainland is manufactured in Richmond, California, and distributed to store owners.

According to Michael Lappert, son of founder Walter and president of the U.S. business, 280 stores sell Lappert’s, and “only three or four have been closed because of low quality.” One of them, he reports, was a shop on the Hermosa Beach pier owned by a guy whose wife objected to his “wandering eye.” She dumped him, the store fell into financial straits, and the owner tried to recover by selling a cheaper product under the Lappert’s name. He got busted, and lost his license to chill.

Page has been living the Lappert’s dairy tale for four years in Palm Springs, and for two years at the larger Palm Desert store. Business is good because the ice cream is divine and because Page is a savvy entrepreneur as well as a dairy product snob.

Just as the U.S. Department of Agriculture assigns quality grades to meat, it does so for ice cream. Lappert’s achieves the highest rank, “superpremium,” because its milk fat content is at least 16 percent, which Lappert calls “the magic number.” Any higher, and the product, he says, “starts to taste greasy.” Any lower, and it loses prestige and some of the creamy texture known as mouthfeel. “Premium” ice cream is 12 to 14 percent milk fat (like Ben & Jerry’s, which got demoted from superpremium after its sale to Unilever in 2000). “Standard,” like Breyers, is about 10 percent milk fat. Soft serve is maybe 6 percent, and worth eating only if you hail from Jupiter and don’t know a dairy product from a Milk Dud.

The Lappert’s vault in Northern California holds 380 ice cream recipes, but space limitations and common sense mean that only about 72 flavors are available to store owners at any one time. Many shops, including Page’s, don’t have room for half that many, but the most popular flavors — Kauai pie, Kona coffee — are always on offer. For Page, the popularity of certain flavors depends on the season. There’s always demand for Kauai pie (coffee ice cream, chocolate fudge, macadamia nuts, coconut), Page notes, and “Canadians love black walnut. But it doesn’t sell when the snowbirds leave town.”

His stores aren’t limited to selling Lappert’s products, and he offers a host of signature goods, some of which are not only edible but fun.

Page stocks merchandise he sources from Hawaii, where he lived for 13 years and whose culture he heartily embraces. Dole Whip originated at the Dole Pineapple plantation, and made commercial magic when it was introduced at Disneyland. You wait a couple minutes for the dairy-free pineapple juice concoction to be prepared at Page’s store, but he claims that “people at Disneyland stand in line for 45 minutes to get it.”

Among the novelties at the Palm Springs store are cleaning products with dirty names. 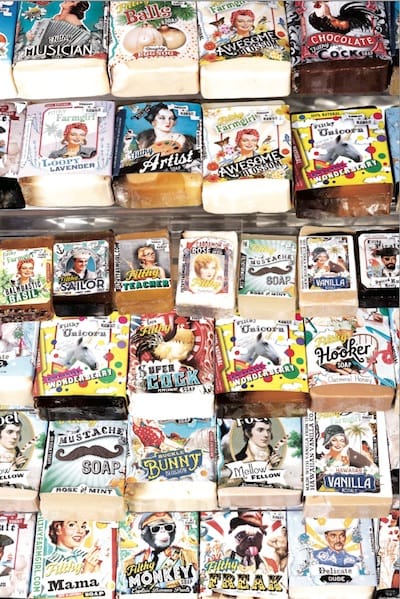 Page is also proud of his shave ice. Like Dole Whip, Hawaiian shave ice is a club-member thing. “A lot of our customers have been to Hawaii,” Page notes, “and come here because they know what authentic Hawaiian shave ice is.” To the uninitiated, it sounds like a boarding-school term for Sno-Cones. Page suppresses the urge to roll his eyes at such a suggestion, explaining that his Hatsuyuki is the top-of-the-line shave ice machine. It shaves large blocks, not cubes, which have more air and result in a larger morsel. Size matters, and in this case, you want petite.

Shave ice fans are probably some of the same customers who buy Donkey Balls, another Hawaiian transplant taking root at the Palm Springs store. Sure, the Ghirardelli chocolate-based candies are tasty, but their appeal is mostly as a novelty, like the hats, T-shirts, lip gloss, and specialty soaps, many of whose labels are porn-adjacent and make you laugh out loud. Like the Donkey Balls: “Fresh Cut & Flavored — Ask for Willy.” The herd includes Schweddy Balls (cinnamon), Blue Balls (macadamia nuts), Biker Balls (cayenne) …

In addition to store-baked cookies in Palm Springs, a new offering from the irrepressibly entrepreneurial Page is vertical hot dogs, at the Palm Desert store. If a donkey’s nether regions can inspire sweet thoughts, who’s to say pig parts held erect aren’t a suitable mustard-and-relish delivery system? For dessert, may we suggest a scoop of vanilla bean? No … wait … rum raisin? No … wait … Hawaiian sea salt caramel …