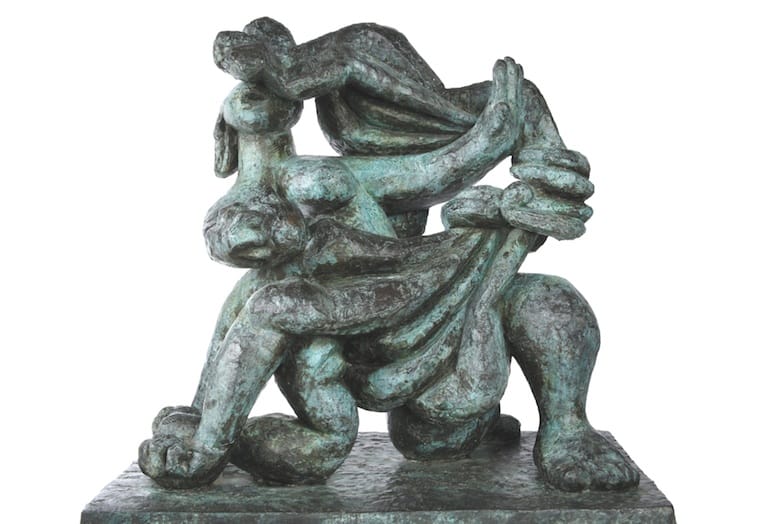 The Warrior thrusts its massive bronze body upward in a monumental expression of strength and power. The bronze sculpture by Marino Marini — whose work often reflected on the lingering conditions of post–World War II Europe — depicts a fallen warrior and, in abstract fashion, integrates one of the late Italian artist’s signature motifs of horse and rider.

The force, vigor, and determination embodied in the work serves as a convenient metaphor for Ted Weiner, the art collector and patron who donated The Warrior almost 40 years ago to the Palm Springs Art Museum. “He loved sculpture,” says Weiner’s daughter Gwendolyn. “He was a strong, powerful person and related to this.”

A self-made Texas oilman who came from poverty, dropped out of school, and worked as a laborer before striking black gold, Weiner was introduced to impressionist and modern art in the homes of his East Coast friends and investors. They triggered a curiosity that inspired him to learn more by exploring galleries and museums in New York. He then began acquiring works, eventually amassing one of the most important collections of modern sculpture in the United States. Weiner’s treasures included a rare, carved-limestone head by Amedeo Modigliani, two classic reclining figures by Henry Moore, a surrealist bronze by Jean Arp, and a ceramic owl by Pablo Picasso. He found The Warrior at the Spoleto Festival in Italy and later negotiated to buy it.

“His story is especially amazing given the hardscrabble life he came from,” says Steven Nash, curator of the exhibition A Passionate Eye: The Weiner Family Collection, which opens Oct. 3 at Palm Springs Art Museum. “Ted had no formal training whatsoever and no cadre of friends and advisers around him. He started from a total blank slate. He realized he had an eye for it, and in a couple of years he was one of the top collectors in the country.” Weiner was born in 1911 to an orphaned mother of Russian descent and a Lithuanian father, who came to the United States to work in Pennsylvania’s coal mines. The eldest of six siblings, Ted left New Mexico Military Academy after his father went broke prospecting for oil. He then worked as a laborer in Arizona and later with his family in West Texas before trying his own luck drilling for oil.

Eventually, he found success, and subsequent discoveries led him to New York to enlist investors to fund his business expansion. Weiner founded Texas Crude Oil Co. and became a leader in the petroleum and natural gas industries.

“He turned out to be an astute businessman with a nose for oil and, surprisingly, for art,” Nash wrote in his exhibition catalog essay.

The Weiner collection neatly defines as modern, and a close look turns up the period’s most important styles, particularly cubism, surrealism, and postwar expressionism.

In addition to modern masters, Weiner collected Asian and pre-Columbian antiquities and works by emerging artists, including younger sculptors such as Jack Zajac, who is included in A Passionate Eye. Home for the Masters

In 1951, Weiner commissioned a then-unknown architect named Edward Larrabee Barnes to design the first modernist home in north Texas. Designed in international pavilion style, the Fort Worth house was built to take advantage of the wide-open property, vast sightlines, and simply defined spaces for optimal viewing of the art.

In addition to introducing modern architecture to the area, Weiner planned the 6.5-acre property to create one of the first sculpture gardens in the country.

“Ted was a builder, a doer, and he had an amazing work ethic,” Nash says. “He bought beautiful rolling land adjacent to a golf course and had the amazing foresight to create a sculpture park. There was no precedent for what he created, and he was extremely hands-on in the design and construction.”

A modern sculpture scholar and former director of the Nasher Sculpture Center in Dallas, Nash knew of Weiner’s collection and their custom-designed modern post-and-beam house and sculpture garden long before joining the museum in Palm Springs. Ted Weiner’s wife Lucile forged the family’s connection to Palm Springs in 1961 when she took an apartment in town to help her manage her chronic bronchitis and other health issues. Ted visited frequently and seized the opportunity to golf and see his film industry friends. Eventually, collectors Joseph Hirshhorn and Walter Annenberg enticed Weiner to the museum board, and he bought a family home in the Las Palmas neighborhood.

His relationship with the museum became especially pivotal when the city of Fort Worth declined Weiner’s offered donation of the property and collection because of steep maintenance costs. Instead, he sent much of the collection on loan to the Palm Springs Art Museum. The Weiner family has since gifted and promised many of these masterpieces to the museum.

“Coming to Palm Springs was such a serendipitous opportunity to meet [Weiner’s daughter] Gwen and dig into the background of the man who built this incredible collection,” says Nash, who began his tenure in 2007 by selecting 34 works for the exhibition Picasso to Moore: Modern Sculpture From the Weiner Collection.

“The beauty of [the exhibition] was that everything had so much space around it,” Gwen Weiner recalls. “This show has many more pieces in it. The most exciting part of this experience for me is the book. We worked on it together, and Steve [Nash] did a great job with the research, and it’s so well written. I’ve wanted a book on the collection for a long time.”

Nash started researching and locating artworks and writing a scholarly exhibition catalog in earnest before he retired from his executive director role with the museum last year. He continued working as a consultant to organize this exhibition and publication. “Works from the collection have been shown in many places, but there was so little art historical writing on the pieces,” Nash says, adding that Weiner’s longtime secretary “was religious and scrupulous about saving invoices, documents, communications, newspaper clippings about Ted and the collection. It was an art historian’s eureka moment to find all this documentation.”

In little more than a year’s time, a painstaking investigation led Nash to the basement of an oil company building, where he found the Calder fountain that Weiner commissioned for his modernist Fort Worth house. “Before the rediscovery, it existed — as far as anyone knew — only in pictures,” he says. “I spotted it in the corner under cakes of dust.”

Nash had many works restored for the current exhibition, but the fountain was not among them.

A sculpture by Barbara Hepworth remains missing. Gwen Weiner laments about one possible scenario. “I moved myself and my parents 19 times.”

In addition to sculpture, A Passionate Eye features a few two-dimensional pieces, including a ceramic mural, Village, by Marc Chagall; a painting, Landscape with Woman, Cow, and Dog, by Roger de La Fresnaye; and drawings by Franz Kline.

But one look at the collection reinforces that Weiner was laser-focused on sculpture — heavy, bold, and masculine objects that embodied much of his own character.

“He was a go-getter,” Nash says. “He couldn’t sit still. He was always accomplishing things. And he had the guts, vision, and intelligence to put together this amazing collection.”