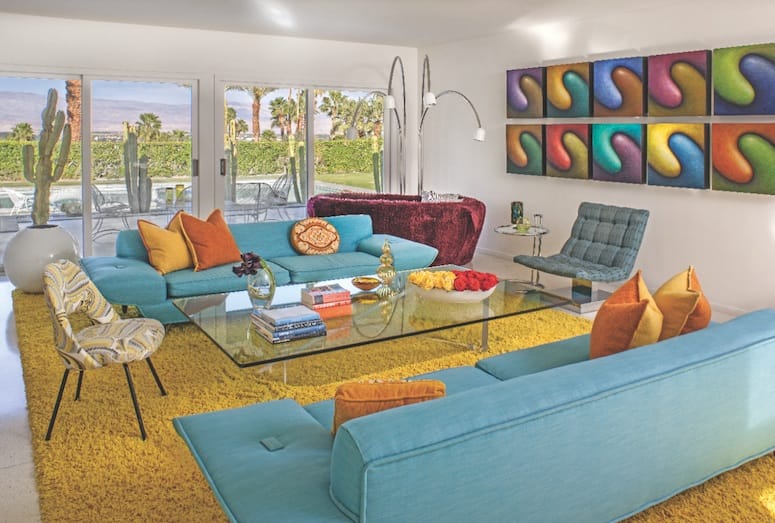 “The clients first called me in to do the four children’s rooms, and piece by piece we worked on the rest of the house over five years,” says Kennedy, who is known for his comfortable modernism and fresh interiors.

By all accounts, the house had a solid skeleton.

“I loved the floor plan, the openness, and the location,” says the homeowner, a successful professional in the communications business and an involved husband and father, “and disliked everything else — from the floor tiles to the green countertops. It looked like a grandparents’ house that seemed formal and constrained.” The first point of action for the five-bedroom, 4 1/2-bath house was the four children’s rooms — two connected by a shared bath for their oldest daughters, a third for their younger daughter, and one for their son.

“The eldest daughter was 16 at the time, so we had lots of fun with it,” says Kennedy (see photo at right).

A turquoise-based wallcovering and a lime green shag rug — both a throwback to the era of the house, yet with a modern edge — set the tone in her room. Pillows of varying patterns and colors contrast playfully against a white headboard and matching side chair.

“I always enjoy doing rooms for young people,” says Kennedy, who in this case worked with each child to create a room that reflected his or her individual personality.

“The following summer, the family went away for a few months to their lake house in Canada, where they are originally from, and tossed us the keys to the Palm Springs house,” Kennedy says. “They hired a contractor and told us to go for it.”

In order to make an impression and bring the house up to date, Kennedy decided to remove all of the travertine flooring and install poured terrazzo, which not only is a befitting and beautiful choice but also maintains a cool temperature and sparkles in the sunlight — perfect for the Coachella Valley climate. Crown molding that had been added at some point over the years was also removed.

“We wanted to incorporate a new architectural feature in the house,” says Kennedy, “and we wanted to make it look like it was always there.”

A stone wall that might have once been in the original house was hand-laid between the entry and the living room, giving the entry delineation and affording a fireplace for the living room.

The architectural side of the renovation extended to the outdoors with a complete redesign of the landscaping, pool, and hardscape.

“Previously, there was very little grass and an abundance of mauve Kool Deck installed in the late ’80s,” says Kennedy, who added concrete pads with grass to break it up. “The look is much more lush now, and it’s designed in a way that works with the outdoor patio furniture.”

Existing palm trees frame the mountain backdrop, and the addition of cactus and other native desert plantings brings it all together. Near the pool, a contemporary pavilion (pictured at right)  built in the 2000s by local firm O’Donnell + Escalante Architects serves as a separate area for gathering, dining, and relaxing with family and friends.

“The structure has a raised floor, so it gives you the feeling of floating over the valley,” Kennedy says. The layout comprises an entertainment room, theater, and bathroom. The floor-to-ceiling windows and retractable doors that grace most of the pavilion blur the line between the indoors and outdoors.

“They dine outside a lot,” says the designer, who chose a black glass dining table and set it near the retractable doors that when stowed away give the impression of eating outdoors. For this space, Kennedy also sourced a vintage Harvey Probber sectional U-shaped sofa re-covered in a Kermit green outdoor chenille from Kravet, providing the light-flooded space with a pop of color and connection to the vivid grass beyond.

For the interiors of the 5,000-square-foot main residence, Kennedy took his cues from the clients’ personalities, their original furniture pieces, and their extensive contemporary art collection.

“The biggest challenge was devising a scheme that complemented and stood up to their art collection,” says Kennedy, who notes that the residents are happy, bright, and spirited people, and his goal was to make that known in the physical environment. Case in point: sofas re-covered in blue — the husband’s favorite color — a Smurf blue, according to Kennedy, because he “grew up watching The Smurfs, and when I presented the idea they loved it.”

Approximately two years after the major remodel, the homeowners finished off the project with the master suite and kitchen.

“The master bedroom was the biggest challenge because it was exceedingly dark,” says Kennedy. To combat this, he designed a saturated, glamorous 1970s Palm Springs look by selecting a yellow-and-white palette accented with an assortment of striking blues. The addition of yellow tie-dye drapery offers a touch of historical whimsy, and Trina Turk bedding brings in a contemporary “Pucci-esque” feel.

At the foot of a walnut bed that Kennedy designed sits a white faux fur–covered bench, creating a beautiful pairing that is at once sleek and textural. In the adjoining master bath, the walls were stripped of their beige color in favor of a shimmering, brilliant white that further accentuates the home’s Palm Springs vibe.

The project didn’t come without its difficult choices. “We wrestled for a while on what to do with the kitchen cabinetry — white lacquer or wood?” Kennedy says. “In the end, the wife decided she wanted the warmth of wood.”

Kennedy chose a classic solid walnut (pictured at right), appropriate for the house, with a cobalt blue tile Heath Ceramics backsplash as a perfect complement. They also extended the kitchen by taking out a wall that separated the previous formal dining room to create one open space.

“The family is very close,” Kennedy explains. “The mother cooks every day, and they eat together, so it had to be inviting and functional at the same time.”

In the dining area, a repeating, circular piece of art from their collection dictated the Eero Saarinen table choice, while a green lacquer Christopher Kennedy credenza against a bright blue silk wallpapered accent wall picks up the hues of the artwork.

Like the darker tones in the kitchen, the media room is a departure from the rest of the house.

“When they first bought the house, they thought they would have to get rid of the paneling,” Kennedy says, “but I think it’s fun to have one dark room in an otherwise light home, so we kept the paneling and embraced it.” The result: a chic, cozy look reminiscent of one of the clients’ favorite local restaurants, Mister Parker’s at the Parker Palm Springs. “Instead of a drawback, we turned it into a highlight.”

The outcome of years spent diligently and thoughtfully restoring the house has produced the perfect Palm Springs family pad.

“They genuinely like hanging out together,” says the designer. “They actually talk to each other! It’s very refreshing.” The same could be said of his work on this project.

“All of the changes are great,” says the husband. “It made the house feel energized and no longer like a preacher’s house.”