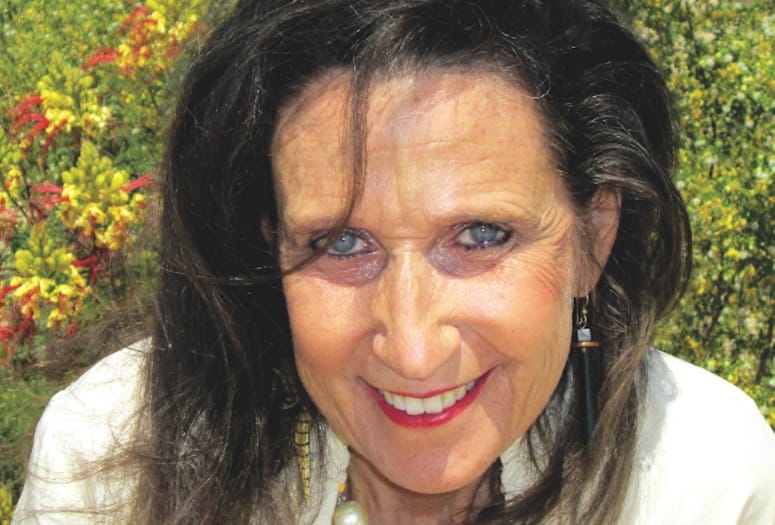 Artist Linda Sibio is not like the other folks at the small Joshua Tree café. She spends her life navigating between inspiration and insanity.

Dressed in a flower-print frock, short faux leopard boots, extreme cat-eye specs, and a man’s button-down shirt bearing hand-painted designs, Linda Carmella Sibio stands out in a crowd; she’s the pink cupcake with rainbow sprinkles in a box of buttermilk doughnuts. Her singularity is without pretense, her fashion sense a whirl of whimsy and thrift.

Diagnosed with schizophrenia in 1977, Sibio, an artist, is not like the other folks at the small café in Joshua Tree. She spends her life navigating the shadow space between inspiration and insanity where lost years, dark dreams, and wily phantasms coexist with artless perception and unapologetic creativity.

“For me, it’s a very unique way of perceiving the world,” she says. “It has to do a lot with fragmentation, disrupted thoughts, dismemberment … and finding a way to create from that.”

“Some people will always need medication,
but i think there’s a lot of over-medicating.
Some of the symptoms [of schizophrenia],
i think, are positive. i want people to understand
that not everything about mental illness is bad.”

Growing up in a group home while her bipolar, schizophrenic mother was in and out of mental institutions (she eventually committed suicide), Sibio sequestered herself at age 11 in a makeshift studio in the home’s basement where she spent hours drawing out her demons — literally and figuratively. By the time she was diagnosed, Sibio knew she had to cling to art or be swallowed by the turbulent maelstrom of her illness and end up institutionalized, or worse, like her mother.

She earned a Master of Fine Arts in painting from Ohio University, which included an interlude of studying art history and sculpture in Italy, and discovered that her disorder provided a creative well from which others dare not drink. In the churning furnace of hallucinations and psychotic flashes, she forges wildly detailed and vivid art, much of it portraying suffering and torment at the hands of a cruel, unjust patriarchal world.

“My work has always been influenced by the nameless and voiceless who come from the underbelly of society,” she explains. “The poor and destitute, the homeless, the mentally ill, drug addicts, prostitutes, suicidal persons, and other marginalized groups are points of interest to me.”

Sibio’s lengthy career includes solo shows in Los Angeles and New York and large-scale graphic multimedia exhibits including paintings, film, sculpture, and live performance. She has worked with luminaries such as Los Angeles artist Rachel Rosenthal and has shown at Walker Art Center in Minneapolis and New York City’s Franklin Furnace, among other venues. Several organizations, including the Lannan Foundation, The Rockefeller Foundation, and the California Arts Council, supported her work, allowing Sibio to teach interdisciplinary art to people with mental disabilities on L.A.’s Skid Row.

Then the bottom fell out. In 1997, Sibio suffered a nervous breakdown after a major multimedia exhibit. It was so severe, she admitted herself to Glendale Memorial Hospital’s mental health unit.

“Holy Dismemberment” is among the first works Linda Sibio created when she moved to the high desert in 1997 after leaving a mental health unit against medical advice.

But when doctors doped her up with more than 20 drugs and determined she probably should be placed in a board and care facility, Sibio left against medical advice. “I got all my stuff together and put it under my robe,” she recalls. “And when we were out in the grounds, I slipped away and got in my car and drove here [to the high desert].”

Since then, Sibio’s been living and creating in a tiny house on a remote patch of desert between Joshua Tree and Twentynine Palms. Here, amid the howling sandstorms and tumbleweeds, she says she found herself. She quit taking all but two medications and began to meditate.

“When I first moved here, I stayed inside for about two years because I was scared of all the open space,” she admits. “But now I love the open space. The desert changed how I see myself. ”

At the height of her illness, when she says she could barely even bathe herself and relied on help from her landlord and an ex-boyfriend, Sibio started painting again.

“I hadn’t just painted in a long time,” she remembers. While working on a pivotal painting called “Embryonic Madness,” Sibio began to transpose sometimes horrific psychotic imagery into provocative works that express her personal ideology and mythology. She called this first series of paintings “The Insanity Principle,” which exhibited at Andrew Edlin Gallery in New York City in 2003.

Using what she refers to as “rhythms of lines and color” created in gouache and sumi ink, Sibio captures the contents of her mind through bold, brightly colored figures often surrounded by thousands of meticulously detailed images.

“I transpose my thoughts into patterns consisting of tortured bodies and lost souls, which are my own form of hieroglyphics,” she says. “I force the viewer into their own primal minds. ”

This vision is apparent in her recent project, “The Economics of Suffering,” a series of 500 small pen-and-ink drawings about finance and hospitalization, opening at Andrew Edlin Gallery in fall 2017. She’s also developing a line of wearable art (hand-painted clothing and silk-screened T-shirts), and is finishing an art book with text called Reflections in a Broken Mirror. She hopes the book will enable others to cope with their mental illness.

“Some people will always need medication, but I think there’s a lot of over-medicating,” she says. “Some of the symptoms [of schizophrenia], I think, are positive. I want people to understand that not everything about mental illness is bad.”

Visit www.crazyforaday.com to find information on her line of wearable art, Sibio.