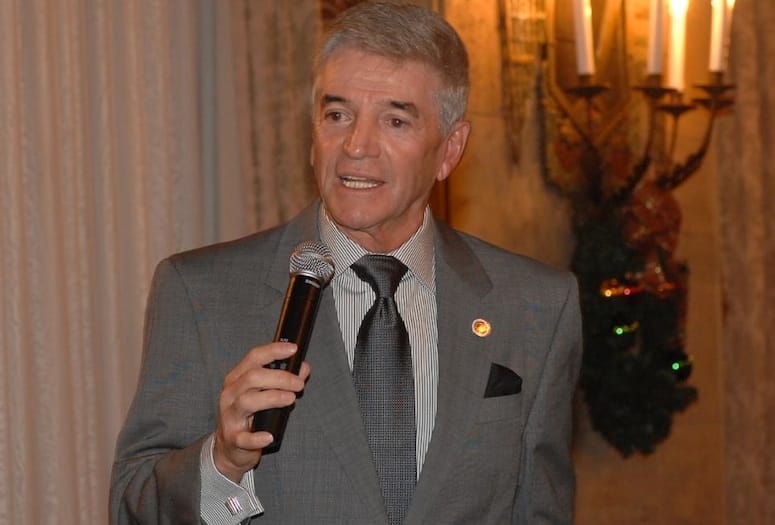 In 2014, prior to performing at a tribute event in the desert, Chicago native and legendary comedian, Tom Dreesen made a bold prediction, rhetorically stating, “Will the Cubs ever go the World Series, again?…2016, bet the farm!”

Dreesen, a huge Cubs fan, is known for making jokes. But when it comes to his beloved Cubbies, he draws the line.

“If I was convinced before, I’m even more convinced than ever” (that this team will go all the way),” Dreesen says. “It’s a dynamite team and it’s really looking good. I think (Joe) Maddon is the best manager in baseball.”

Baseball has always been a passion for Dreesen, who grew up with eight brothers and sisters in south Chicago.

“I grew up in a rat infested shack,” he says. “I came from the poorest background.

Dreesen worked hard, even as a youth, to help feed his bothers and sisters. He dropped out of high school at age 17 and joined the service. In the Navy, he received his high school diploma and reflects, “I read every positive book I could find including The Magic of Believing by Claude Bristol…but the book that changed me was The Power of Your Subconscious Mind by Joseph Murphy. Even after the service, I would go to library, right down notes, and apply them to my life. I didn’t want to return to a negative background.”

Dreesen will share his life lessons and career advice for comedians, improv and sketch comic teams as the keynote speaker at the Joshua Tree International Improv/Comedy Festival, July 8-10, at the Hi-Desert Cultural Center.

His hour long seminar, The Joy of Standup Comedy and How to Get There is scheduled for 2:15 p.m. July 10 followed by a Q&A, and anchors the weekend of festival workshops, performances, competitions and awards.

Dreesen relates a quote by Ralph Waldo Emerson from a passage called Success, “There is a quote by Emerson that, basically, said, “You’ve lived a good life if you leave this world better than you found it. I try to pass on that on to my audience, and I want them to gain from what I am going to deliver:

• “This is a wonderful journey they (comedians) are on.”

• “I want them to know that they have the greatest job on the planet, in my opinion.”

• “I want to teach (comedians) to enjoy the journey on your path to making people laugh.”

• “Laughter is healing and you can bring health to others.”

• “Those that can make people laugh are gifted people.”

• “Enjoy the journey…wherever your gift will take you.”

• “The biggest mistake in life is to compare yourself with someone else…no one is competition with another human being. Your only competition is your former self.”