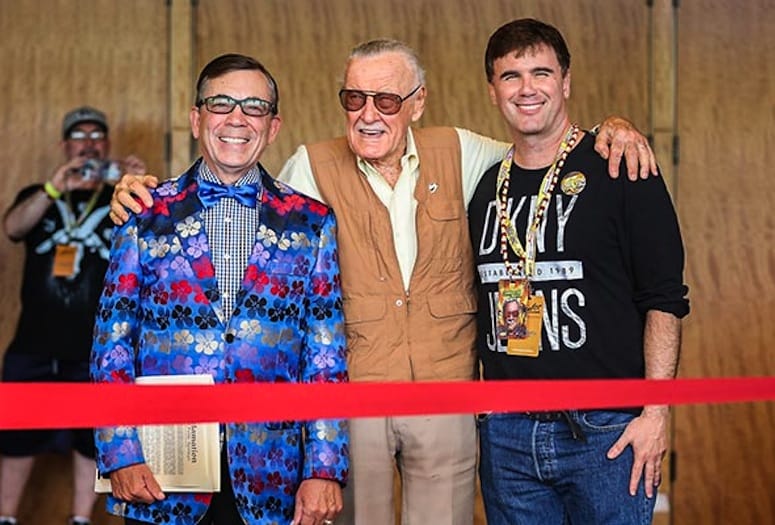 Lynda Carter, Stan Lee, Lindsay Wagner and The Walking Dead’s Khary Payton. These celebrated pop culture figures may be in the spotlight at Comic Con Palm Springs this year, but it’s Christopher Spellman, the event’s founder/executive producer who continues to generate ample applause.

It’s no easy feat launching a major Comic Con event — anywhere — for the first time. But in 2016, Spellman, a valley resident, seemed to pull off something magical in the freshman outing. He offered a slew of dynamic activities and events that surpassed expectations while also giving residents plenty of eye candy with a diverse lineup of talent.

This year, Spellman promises to raise the bar. In addition to Marvel Comics titan Stan Lee’s return, everything from a $1,000 grand prize for Best Costume, CosPlay, a Zombie Café, a Geekfest Film Fest, Super Sonic Speed Dating, and a Saturday evening concert by Lynda Carter — she originally twirled that golden lasso on TV’s Wonder Woman back in the 1970s in case you’ve been in a cave — should keep the masses satiated.

Still, Spellman must have gained some wisdom in terms of execution after the first go-around? He shares some of that with Palm Springs Life.

PSL: Last year’s event was a hit. What were some of the lessons you learned from bringing Comic Con here for the very first time?

Christopher Spellman: We’re very happy with last year and that the community was pleased with what we did. As far as learning curves, where to start? When you’re putting on a show of that size, it’s all about understanding all of the moving parts, and keeping our eyes on all of the little things.

PSL: What were some of the most challenging things doing it the first time?

CS: When we had a two-hour wait for people to get in on both Friday and Saturday. That was the most daunting thing we had to face. I don’t think people were aware of the expectations of this event. It was so new.

PSL: Did those expectations surprise you?

CS: We were surprised, excited, and elated. But we worked really hard to promote it. We didn’t know what the turnout would be, but we wanted to do well and we did. There were learning experiences and now we’re taking it to the next level this year as far as talent goes. Stan Lee is coming back. J. Scott Campbell [artist of Danger Girl and Spiderman], Lindsay Wagner, and others. And culminating with a Saturday night show with Lynda Carter performing in concert, it makes for a great festival and a great weekend.

PSL: How did you land Lynda Carter?

CS: It was a year in the making. We almost made it happen last year.

PSL: What was the driving force behind wanting to bring Comic Con here?

CS: I have a big background in entertainment and in this part of the industry. What I really wanted to do was bring something special to our home and community. We didn’t have a Comic Con. It was my mantra since 2011: Bring Comic Con here. I wanted to do a real Comic Con and do it right. We brought in the right people. But we made it unique, too, turning it into a very rare Comic Con. Not many Comic Cons have all the special events that we have. We have a lot of celebrities, a lot of parties. Zombie walks. Zombie Cafes. Arcade expos. Virtual reality. To have all of that makes us very unique. You look at a lot of other Comic Cons and you won’t see as many fun things for people to do. That’s something we keep evolving with. There’s a lot here so people don’t just feel as if they’re walking up and down convention halls for hours upon hours.

PSL: The zombie walk through downtown Palm Springs was popular, in fact.

CS: It went so well that even the city and the police said, “Hey, let’s grow this.” We had about 100 people. For the first year, that’s not bad. So, we’re growing that now. The Zombie Walk this year is going to end at Hard Rock Hotel on Friday night, and there will be a Zombie Walk after-party.

PSL: So why do we love comic culture so much? Why has it become such a big thing?

CL: Comics were something intertwined with our American culture. It’s part of our roots — to rise up, be strong, and be the hero. It allows people to identify with something that makes them feel good. I think it allows people to touch into their purity, their wholesomeness, their good side. Best of all, in a Comic Con world, everybody treats each other nicely.