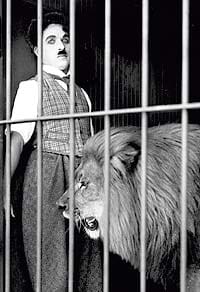 Say what you will about Michael Moore’s politics, the controversial filmmaker of Bowling for Columbine and Fahrenheit 9/11 deserves credit for opening the lid on documentaries.

“He was at the forefront of the democratization of getting films such as his recognized,” says Carl Spence, programming director for the Palm Springs International Film Festival. “It was a wake-up call of sorts; it showed distributors and theaters that there can be a market for these types of films.” Now, Spence adds, there are many more documentaries garnering attention. “It’s not just one breakaway film and that’s it. … The documentary is coming into its own within the consciousness of America.”

It is, therefore, no surprise that the festival will give nonfiction cinema its due by screening 30 such films, including 12 to 15 documentaries competing for Oscar nominations. Spence synopsizes a few noteworthy titles:

• The Pursuit of Equality, which focuses on last year’s rush of gay marriages in San Francisco (At press time, Mayor Gavin Newsom was expected to attend.);

• Black Bull, a Mexican film about the lives of bullfighters;

• Five Days in September, a Canadian film revolving around the Toronto Symphony Orchestra’s struggle to survive (“It has amazing music,” Spence notes.); and

• Sisters-in-Law, a British film that deals with women and justice in the male-dominated society of Cameroon, Africa.

Another trend the festival is following is what Spence refers to as a “hotbed of filmmaking activity” in Chile. Although Argentina and Brazil output more movies, the number coming from the smaller South American country has increased significantly. “The quality, as well as the diversity of the kinds of films emerging from Chile, is quite staggering,” Spence says. He considers one of the highlights a film set in 1914 titled The Last Moon by Miguel Littin, a descendant of Palestinian immigrants in Chile.

Four late-night screenings lean toward the edgy side. They include Germany’s box office smash Dreamship Surprise, which Spence describes as a Star Trek/Star Wars spoof with a gay twist, and French filmmaker Luc Bresson’s Banlieue 13, which he likens to “a high-octane Grand Theft Auto” video game.

While many of his films have been shown in past iterations of the Palm Springs International Film Festival, Italian filmmaker Pupi Avati receives the royal treatment this year with the screening of six of his works. Spence says new prints have just been cut of the Avati library (he has been making movies since 1970). “He has a way of making films that really resonate with people,” Spence says. “The style and technique and the stories he chooses to tell always stand out.” Avati will attend the festival and the U.S. premiere of his latest work, Second Wedding Night.

Festival organizers balance the opportunity to see premieres with the opportunity to see four or five archival films. Alfred Radok’s Distant Journey, which Spence labels a “rediscovered classic from the Czech Republic,” follows the marriage of two doctors and how their lives are disrupted during the Nazi occupation. Shot three years after World War II, it is one of the first movies to deal with the Holocaust,  Spence says.

On a light note, archival presentations include Charlie Chaplin’s 1928 The Circus. “It’s one [of Chaplin’s films] that wasn’t really in circulation for many years,” Spence notes, adding that the print is coming from Europe.

Chaplin not only produced, directed, and starred in the flick, but also composed the score (at the age of 79) and sang a song at the beginning of the film. “I think it has some of the most comedic scenes ever filmed,” Spence says. “It’s an overlooked masterpiece.”

Among the festival’s more than 200 films, the biggest standout for the programming director screens on opening Friday as part of the Awards Buzz series. The Two Sons of Francisco, from Brazil, is about a father determined that his offspring will become a successful singing duo. Spence considers the film, based on a true story, to be flawless. “I think the audience will embrace it. It will have many people in tears at the end. It’s warm, it’s funny, it’s moving.”