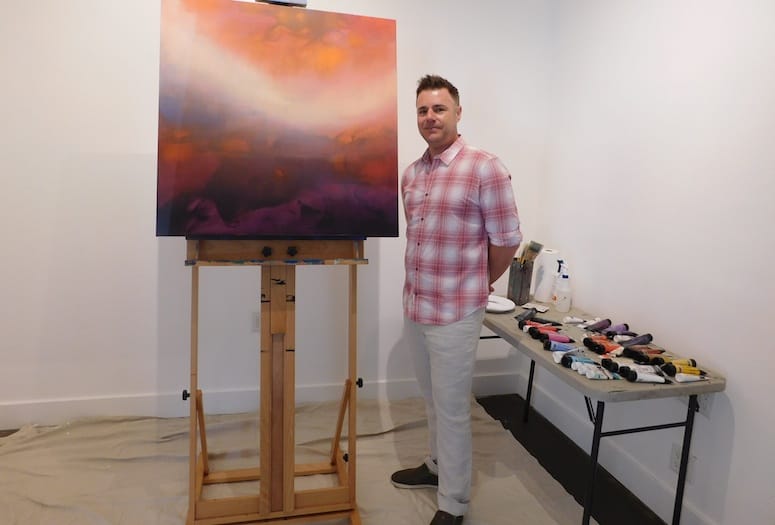 Steve Janssen says he missed having his own art gallery, and this new Palm Springs location has a studio to work in as well.
PHOTO, VIDEO BY MARCIA GAWECKI

In 2006, Janssen opened his own art gallery the same weekend as 30,000 gay men attend one of the biggest gay festivals of the year. Janssen will open his gallery May 5 during the 28th edition of White Party. The opening reception will be from 6-10 p.m. May 6.

“It just makes sense since everyone is in town anyway,” says Janssen, as 15 of his large and medium-sized canvases line the walls of his new studio in preparation for the show.

The new downtown location features floor-to-ceiling windows in the front as well as back doors. Formally a T-shirt shop, the space didn’t take much renovation. Paint and track lighting turned it into a minimalist style art space.

VIDEO: Steve Janssen describes some of the pieces for his opening show May 5.

Tucked behind the front room is a working studio for Janssen while he’s in Palm Springs. It could also double as a small gallery featuring the work of another artist, should the need arise. Right now, it’s equipped with a large easel, table, tarp and overhead light — all the essentials that a working artist needs.

Janssen’s first show will feature his new series of acrylic “atmospheric” canvases. Later shows will feature emerging artists he’s met in Los Angeles, where he fled when the economy tanked in 2010 and the original Janssen Artspace had to close its doors.

The former Janssen Artspace was a commercial success featuring top-notch painters and sculptors when it opened in 2006. Janssen says it was a tough decision to close, but he kept working as an artist in LA, and was represented by Gloria Delson Contemporary Art Gallery. However, he yearned to be back in charge, curating shows, and “creating a story with art,” he says. “I’ve learned a lot since then.”

He and his partner of 15 years, Stephen Huvane, didn’t give up their Palm Springs home. Today, they have homes in Palm Springs and Los Angeles. For Janssen, Palm Springs is a very special place. “To be an artist in the desert is such a beautiful thing,” he says. “There is such a connection between nature and your soul that you cannot find anywhere else.”

Janssen’s atmospheric works of art reflect the colors of the desert blooms. “But it could also be viewed as an alien spacecraft or sunrise, depending on how you look at it,” Janssen says.

Janssen works with acrylics, and uses water washes to build an atmosphere. Layers and layers of brightly colored paint including 15 at a time are applied. The finished pieces are collected by Greater Palm Springs followers as well as Hollywood celebrities like Jennifer Aniston. “She’s really down to earth,” Janssen says of Aniston.

He plans to keep the gallery open year-round. He’s not worried that the gallery opening comes at a time of year when the tourist season slows just a tad.  “Palm Springs has become a tourist destination,” Janssen explains. “And it doesn’t shut down in the summertime.”

Future shows at Janssen Artspace will include the new and the old. The new is Erik Asla, a Swedish photographer that Janssen met during his time in LA. “The stillness of his ocean landscapes have not been altered electronically,” Janssen says. The old is the work of Mark Brosmer, who has known Janssen since the beginning.