Fresno State Winery - For 11 years, Fresno State has operated the only bonded winery at a university. 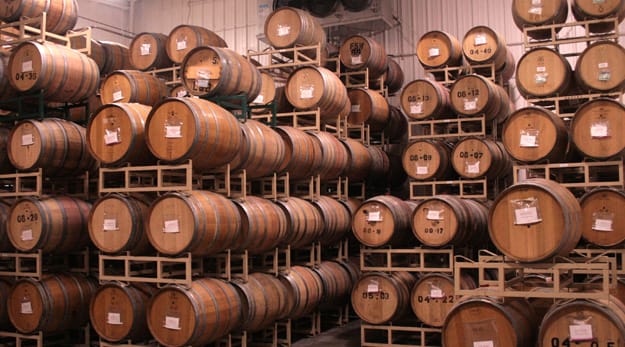 When Fresno State Winery posted photos on its Web site of 5,800 clusters of grapes hanging from the ceiling of its barrel and storage room, e-mails came in from as far away as Armenia and Uzbekistan.

“It was like being in a rain forest of grapes,” says Winemaster Ken Fogelsang. Fogelsang and enology students were attempting to make a sweet amarone, which calls for the fruit to dry/shrivel so the sugars concentrate. But they let the grapes ripen too long. “It turned into a port, but that’s OK,” Fogelsang says, clearly amused (and noting that, as a port, it tasted “fabulous.”) “We try crazy things on occasion. Most of the time it works.”

For 11 years, Fresno State has operated the country’s only bonded winery at a university. (Because the state cannot sell alcohol, the school’s Agricultural Foundation holds the bond.) It sells wine under the Fresno State University label on campus and through major distributors; Costco carries the popular TailGate Red (a blend whose label depicts the school’s bulldog mascot) and petite sirah. Proceeds from wine sales go to the College of Agriculture, which funnels the money to the enology department to purchase and upgrade equipment.

The University of California Davis garners more attention for its wine program. But Fogelsang — who has a master’s degree in microbiology — points out, “At Davis, the emphasis is on the research side. … Our vision was that we needed to have our students carry the process to fruition. Rather than making five, 10, 15 gallons of wine and then throwing it down the drain, we thought it would be an additional dimension to their education — commercializing it and carrying it through to the marketplace.” Annually, the students make 11,000 to 12,000 cases from more than 23 varietals. “We make about 30 types of wine per year, from nouveaus to faux ice wines,” Fogelsang says. “We do a lot of varieties that are not as well known to American consumers.” This year, the school crushed is first albarino. Its Vin D’une Nuit (wine of one night) is a rosé blend of syrah, mouvedre, and grenache crushed together in 24 hours. Its cryoextraction “ice” wine, Solaré, was initially made from viognier. Last year, they used muscat, but are returning to viognier this year.

A glass case in the enology department — filled with ribbons from wine competitions — attests to the success of the program. For example, the 1999 syrah won double gold at the California State Fair. Tailgate Red won silver medals at the 2008 Florida State Fair and San Francisco Chronicle wine competitions. The 2006 Solaré won double gold and critics challenge gold at the 2009 Florida State Fair. In the 2008-2009 academic year, students-produced wines won 49 medals in 12 competitions, bringing total awards to around 300.

Campus vineyards yield zinfandel, petite sirah, touriga naçional, muscat, syrah, and viognier. The school buys other grapes from growers, primarily in Fresno and Madera counties and the San Joaquin Valley. Zinfandel grown on the campus is used for a rosé; red zinfandel grapes are sourced from Linden Hills, east of Stockton.

Enrollment averages 160 to 170 students in the wine program, which offers two degrees: enology and viticulture. “If you select viticulture, you have to take enology classes so you understand what the winemaker is doing,” Fogelsang says. Students can complete a double major in about five years. “We’re finding that to be a popular option among those students that come with an enology or viticulture background [i.e., their families are in the wine business]. Generally speaking, our student population comes in with no background in grapes or wine.” The school also offers a master’s degree (seven students are currently in that curriculum), as well as a certificate program for students who have a baccalaureate degree in another field.

“We’re getting kids right out of high school. They have to wait until they are 21 to take the tasting [sensory] classes,” Fogelsang says.

“Our students are involved from the vineyard to the marketplace,” he continues, noting that they interface with consumers regularly. On the third Thursday of November, a class gets divided into three teams to promote their wines to 300 to 400 people. “The group with the most sales gets 10 points extra credit,” Fogelsang says.

Ryan Knoth, who abandoned a career in biotech to pursue winemaking, is completing his last semester at CSU.

“I have been able to have my hands involved in every aspect of winemaking — from the grape to the bottle,” he says. “The enology program has prepared me for entering a commercial winery and given me the skills I will need to succeed in a very competitive market.”