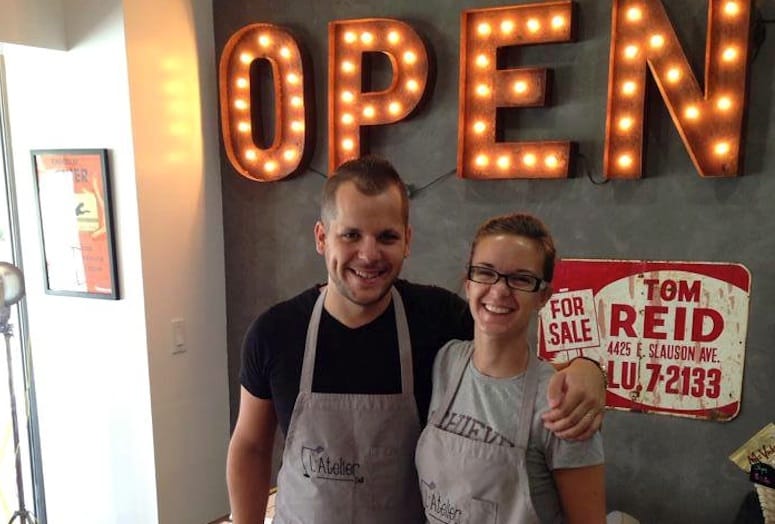 “What makes you happy to be in America?”

Raphael and Charlotte Farsy wouldn’t have to ponder that question for very long.

Eighteen months ago, the French couple fell in love with Palm Springs while here on their honeymoon. That prompted a move and opening of their own deli/French bakery, L’Atelier Deli, in the La Plaza area of downtown Palm Springs.

“We were on our West Coast honeymoon and stopped in the desert,” recalls Charlotte. “The weather, the mountains, the downtown and very friendly people here gave us the idea to open a French bakery/deli.”

Through their business, the Farsy’s met fellow French countryman D’Geyrald DG, a Palm Springs documentary filmmaker. D’Geyrald’s latest documentary project goes back to that initial question, and he plans to travel coast to coast asking people “ living in and calling America home” the question, “What makes you happy to be in America?”

To help promote the film, the Farsy’s will host a “meet and greet” for D’Geyrald from 5-7 p.m. Oct. 13 at L’Atelier Deli. Raphael and Charlotte will be on hand to serve guests a glass of wine along with a French appetizer plate for $10.

The event helps to solidify the Farsy’s presence in Palm Springs’ packed restaurant market and emphasizes the French aspect of their business.

“I have never felt so proud of being French,” Raphael says. “In America, people are fascinated by our food.  It makes me so happy our customers keep coming back.”

Born in Paris, Raphael is a trained pastry chef with a marketing degree. Before relocating to the desert, he owned a “boulangerie” (French bakery) in Paris.  Charlotte, a former sales rep with a record company, was raised on the coast of Brittany in the northwest of France where her family ran the equivalent of a bed and breakfast in a castle. The two met while studying at the French School of Commerce in Paris, and their shared passion for marketing, food and wine proved a match.

“We wanted to create something different,’ says Raphael of L’Atelier Deli . “Not an upscale French restaurant but a neighborhood deli/café.  We want to have fun and provide a casual French food experience like none other.”

The Farsy’s import traditional French products such as fresh jambon, saucisson, and a selection of French wines and strive to surprise locals daily with an assortment of homemade pastries and deli fare. Signature bites and artistic creations to sample include: