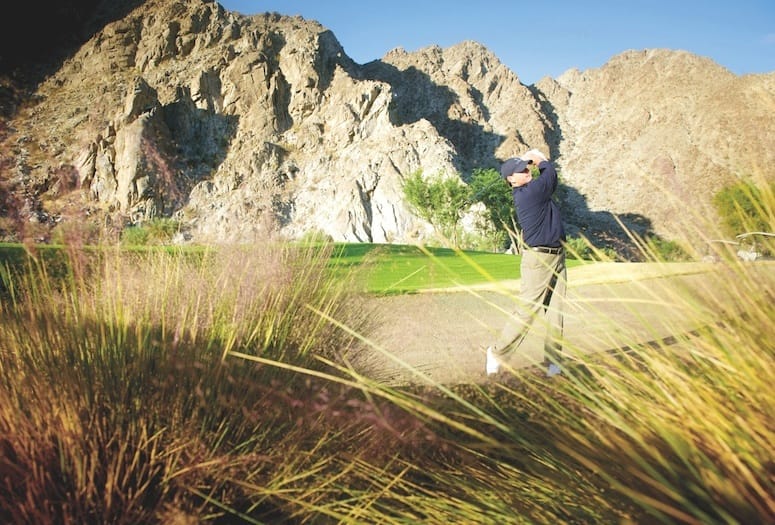 Drought conditions and the resulting state-ordered water mandates have prompted many of the valley’s 120 courses to rethink their use of water and to revamp aesthetics in order to reduce the collective impact on the region’s water supply.

• See related story: Make sure you are properly dressed to play.

Such changes, of course, aren’t limited to our wealth of golf venues, but to golfers, as well,  who might feel particularly challenged in adjusting to the new norm on their fields of play. This is especially so for ball-strikers who often … hmmm, how to put this … send their balls in unorthodox directions. In short, everyone’s expectations of how a course should look and should play will change.

Players accustomed to lies in the middle of the fairway will still enjoy the lush and plush presentation of Bermuda or rye grasses, but many local courses are making necessary changes either by reducing overseeding of certain areas and/or by removing turf considered nonessential to play.

Among the leaders in such conservation efforts is SilverRock Resort in La Quinta, host to the Bob Hope Classic (now the CareerBuilder Challenge) from 2008 to 2011.

“We’ve been fortunate at SilverRock to not really have the mandate, because we’re on canal water, which the state hasn’t really mandated,” says Randy Duncan, general manager at SilverRock.  “However, I think all of the golf courses here in the Coachella Valley have made a choice — even before the mandates came to a head — to conserve water.”

Working behind the scenes with state-of-the-art weather and pump stations, SilverRock’s conservation efforts are clear to golfers during the course of any round.

“On every hole there are areas we didn’t overseed, whether it’s around the tee boxes, around the edges of the fairway, around all the bunker faces, or up against the native areas,” notes Duncan of SilverRock’s two-tone, green-and-tan look. “We’ve also taken out some turf and replaced it with native areas, and we’ll continue to do that.”

Changes Across the Desert

Mirroring the efforts at SilverRock, public and private golf courses across the valley are revamping their respective looks, employing the two-tone appearance of green grass and dormant rough, and replacing turf with a desert aesthetic.

When the CVWD, working with a $1.1 million grant, debuted its course rebate last year, 18 applied for the turf removal program, representing both public and private venues.

The largest, ahem, splash might well be across the nine-courses of  “The Western Home of Golf in America” at PGA WEST and La Quinta Resort & Club.

During the 2015 CareerBuilder Challenge, PGA WEST introduced its own two-tone makeover, with tour players traversing plush turf contrasted by a golden, rustic outline.

According to the CVWD and the resort, PGA WEST will continue the practice in 2016, while its sister tracks at La Quinta Resort save resources by using recycled, nonpotable water at the Mountain and Dunes courses.